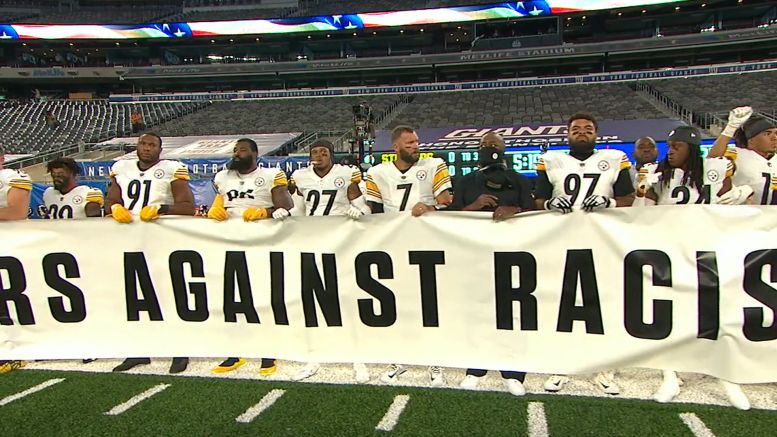 The Pittsburgh Steelers said in the days leading up to last night’s opener that they would present a united front in their response to the social unrest that has substantially defined the past several months around the country. Steven Nelson and James Washington mentioned this. Head coach Mike Tomlin did as well.

In the hours leading up to the game, several players, such as Zach Banner and Cameron Heyward, posted messages against racism on Instagram discussing their desire to improve the situations in their hometowns.

When they came out last night for the rendition of the national anthem, all players stood in unison, but were holding a massive banner that read ‘STEELERS AGAINST RACISM’, listing the home towns of many players. Tight end Eric Ebron and Chase Claypool were also seen raising their fists, while Alejandro Villanueva and Stephon Tuitt held their hand over their heart.

Reportedly, the Steelers remained in the locker room during the rendition of Life Every Voice and Sing, known as the ‘black national anthem’, which was performed prior to the Star-Spangled Banner during every week-one game.

The New York Giants remained on the field, and in both instances featured a variety of individual responses, with some players standing, some kneeling. Two players knelt beside head coach Joe Judge, who placed a hand on the shoulder of either player.

And then it was on to football, as with any other season.  While many players and coaches wore anti-racism messages on warm-up shirts prior to the game, including Tomlin’s ‘End Racism’ shirt, the only insignia featured on the field were individual messages on the rear of players’ helmets.

The Steelers, again, chose in this instance to present a united message. All of them chose to bear the name of Antwon Rose, Jr., a 17-year-old who lost his life after being pulled over by East Pittsburgh Police in 2018. Teresa Varley penned his story for the team’s website, which you can read here. Villanueva was the exception, who bore the name of an African-American brother in arms who died in combat.

What will follow after the opener, however? Surely teams’ pre-game rituals will vary after Week One. The Steelers, at least I would imagine, are not going to hold a banner for every game of the season. I would imagine that they will continue to present a united front, regardless of what they decide to do.

Unlike in 2017, which led to an uncoordinated response prior to the Chicago Bears game, the Steelers and many other teams have established committees within the team consisting of players, coaches, and other personnel, which are designed to discuss a variety of matters, including steps that they would like to take in order to materially address things like working toward eliminating the impacts of racism in their communities.

What you see on the field before the game, as we did tonight, is just a small sliver of what the Steelers and other teams are looking to do. It’s a symbolic representation of a broader and wider outreach that players and organizations are hoping to use to make a meaningful impact.