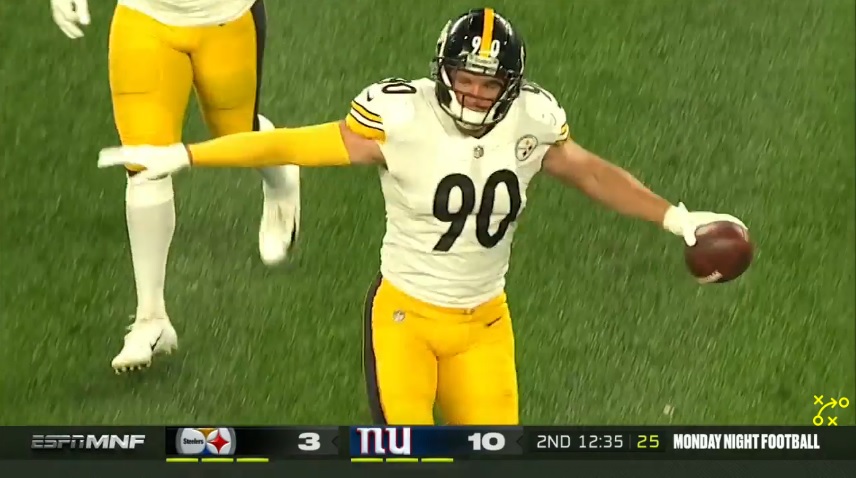 It’s hard to compete with 2020 when it comes to weirdness but I’ll do my best. At least it comes in a victory. Those are always a lot more fun.

– Sure was nice for the Steelers’ offense to score some points after taking a sabbatical last year. The Steelers scored 26 points tonight. The most they put up in a game last season? 27.

Their 26 point output was the most in a Week One game since 2016, a 38-16 win over Washington. That contest also took place on a Monday night.

– Benny Snell notched his first 100+ yard game tonight. Came close last year with a 98 yard game but he finally pushed into triple digits tonight. His first 100 yard performance since his final game at Kentucky, an upset bowl win over Penn State that saw Snell rumble for 144.

– JuJu Smith-Schuster’s two touchdown performance makes him the first Steelers’ wide receiver with two TDs in an opener since Antonio Brown in 2016.

– Cam Heyward’s end zone INT was the first of his NFL career. It was only the second of his college or pro career. His only other came in a Week 1 win over Miami (FL) in 2010, his final year with the Buckeyes. Check it out.

Heyward is the first Steelers’ defensive linemen to intercept a pass since Stephon Tuitt did it against the Bengals in 2015. Want to know what’s even wilder about that? Both snaps were at the four yard line.

So when offenses have the ball at the four, they better watch out for those DEs turning into DBs.

– According to Pro Football Reference, there have been 62 drives of 19+ plays. The Giants are the first to have theirs end in an interception.

– Pittsburgh allowed just 29 yards rushing tonight. The fewest given up in any game since holding the Chiefs to 28 yards in 2017. And the fewest allowed in an opener since 1999, when the Browns came back to football and were promptly smacked 43-0 by the Steelers. Cleveland ran for just nine yards that day. Also a primetime game, though a Sunday nighter.

– The Steelers’ have forced 40 takeaways over their last 17 regular season games. Absurd production.

– Last one. Mike Tomlin’s now won seven season openers since taking over as Steelers’ head coach in 2007. Pittsburgh finished with at least 9+ wins the previous six times. Five times, they won at least ten games. They made the playoffs in all but one year (2009).