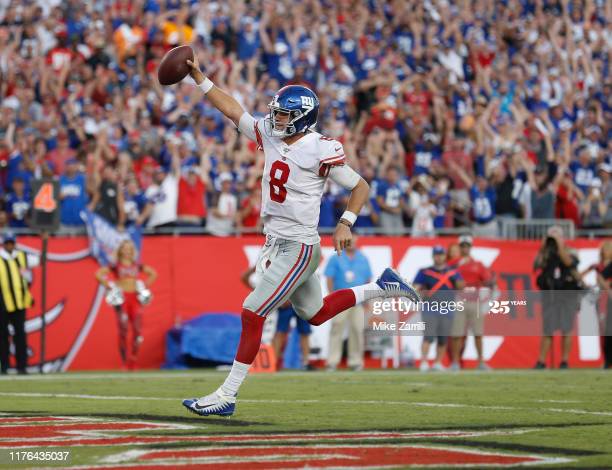 For the first time of 2020, here’s our scouting report on the New York Giants.

It’s good to be back with you guys. 2020 is especially weird for these reports. Doubly so for the Steelers’ Week One opponent. The Giants enter this season with a new coaching staff led by first-timer Joe Judge, previously serving as the Patriots’ special teams coordinator. Since I’m focusing on scheme, I relied on 2019 Cowboys’ tape for the offense, given that OC Jason Garrett and OL coach Marc Colombo came over from Dallas. That’s our best gauge on what to expect schematically. Josh will hone in on the Giants in the individual/personnel report.

With the same OC and OL coach coming over from Dallas, we can definitely use 2019 Cowboys’ tape as a gauge for what to expect. While the Giants are a far worse roster than the Cowboys, the run game success in Big D centered around an elite back with bust and vision. Something New York has in Saquon Barkley.

Jason Garrett and the Cowboys run a good mix of inside zone and power. Check out Elliott’s vision on this Week 17 run against Washington. They let the back decide where to fit the ball. Not by scheme alone.

Dallas used plenty of pre-snap motion to create leverage and stress defenders. Watch #58 step out because of the motion across, taking him out of the play once Zeke cuts back on this zone scheme.

Though I’d imagine they’ll run plenty of power with some of the big guards they have, including Will Hernandez, drafted as a mauling run blocker out of Fresno State. Again, talent isn’t as good here but like the Cowboys having big linemen in Tyron Smith, La’el Collins, Zack Martin, etc, the Giants boast a big front five. The listed weights for each linemen and you can bet most of these guys are heavier than what the team says.

Expecting more power and gap schemes from this group. Two starts are new to the team – the rookie Thomas and Fleming – while Gates started just three games for them last year. Group still working on gelling together.

Dallas used a FB on 118 snaps last year, Jamize Olawale, a more hybrid type who can catch the ball. The Giants technically have a FB in Elijhaa Penny and he seems to be cut from a similar cloth. Listed as a RB, he saw action as the Cardinals’ RB in 2017. I think this offense will primarily be an 11/12 personnel team though. Less FB action than Dallas.

A passing attack of course led by second-year QB Daniel Jones. Josh will talk more about him below. Don’t be surprised if the first snap of the game is playaction, knowing the Giants’ strength is the ground game and defenses are keying in on Barkley. It was common for the Cowboys to run playaction on the first snap, looking to take a deep shot or move the pocket.

And like the run game, they use plenty of motions to get defenders out of position. Notably in the screen game. The result here is ugly, blame that on poor blocking, but you see #18 coming across as eye candy for the defense as the screen goes to the right.

Ditto with the RPO game. Lot of power run game coupled with slants behind. Read the LB. If he follows the puller, it opens a window for the slant.

You’ll also get lots of spot/sail concepts to the trip side of the formation.

It’s been a long, hard year to date, but it feels good to be able to type this…it’s Giants week, Steelers fans!

The Steelers get a juicy matchup to open the 2020 season, taking on a Giants team that has seen a number of changes this off-season, including the retirement of long-time starter Eli Manning and the opt-out of starting left tackle Nate Solder.

Now, it’s completely the Daniel Jones show in New York. Fortunately for Jones, he has quite a few weapons to work with. The problem is, he’ll take on an elite-level Steelers’ defense with major question marks along the offensive line, starting with rookie tackle Andrew Thomas and right tackle Cam Fleming.

Jones had major ball security issues, fumbling the football 18 times as a rookie. When he held onto the football though, he did damage with his arm and his legs, giving new head coach Joe Judge an intriguing second-year quarterback to work with in his first year as head coach.

The Giants would be wise to try and establish the run early with star running back Saquon Barkley, allowing them to set up play-action for Jones.

The good news for the Giants is Barkley is a stud and can create something out of nothing.

Late in the 2019 season, the Giants’ offense was a mess, but Barkley continued to thrive. He’s an explosive back in space and can create a number of misses in the open field. He absolutely embarrasses this Dolphins defensive back in the open field, putting him on his own personal highlight reel.

When the Giants established the run, they were able to draw guys down into the box, opening up deep shots and play-action throws to guys like Darius Slayton, who had a huge breakout rookie season, and veterans Golden Tate and Sterling Shepard.

Slayton and Jones really established a strong rapport last season, so look for the second-year signal caller to look to Slayton early and often Monday.

Slayton is known as the deep threat on the roster, but he can create splash plays as well with the football in his hands, as evidenced by the first clip above. He’s a burner in space and has shown a propensity to break some tackles here and there.

Tate is dealing with a slight hamstring injury, but he is a strong route runner with good after-the-catch abilities. Shepard is the key possession receiver for the Giants.

Look for Tate to work exclusively out of the slot and take advantage of some mismatches.

At tight end, health is the biggest question mark with Evan Engram. If he is healthy, he’s basically another wide receiver who is a clear mismatch wherever he lines up on the field.

Backup tight end Kaden Smith is a guy who really put some good tape together down the stretch with Jones and Manning when Engram was on injured reserve. He’s a really solid No. 2.

The offensive line, as I mentioned earlier, is a real question mark. Thomas is the headliner as the former No. 4 pick, but he’s being thrown to the wolves in his first NFL start, taking on the likes of Bud Dupree.

Right tackle Cam Fleming put some decent tape together as a reserve in Dallas this year, but it remains to be seen what he can do as a full-time starter. I do like the guards in Kevin Zeitler and Will Hernandez on paper, but Hernandez struggled mightily last season.

Special teams is pretty solid for the Giants, who added veteran Graham Gano this summer to hold down the kicking duties, while Riley Dixon had a very good year in 2019, averaging 46.1 yards per punt and 29 punts dropped inside the opponent’s 20-yard-line.