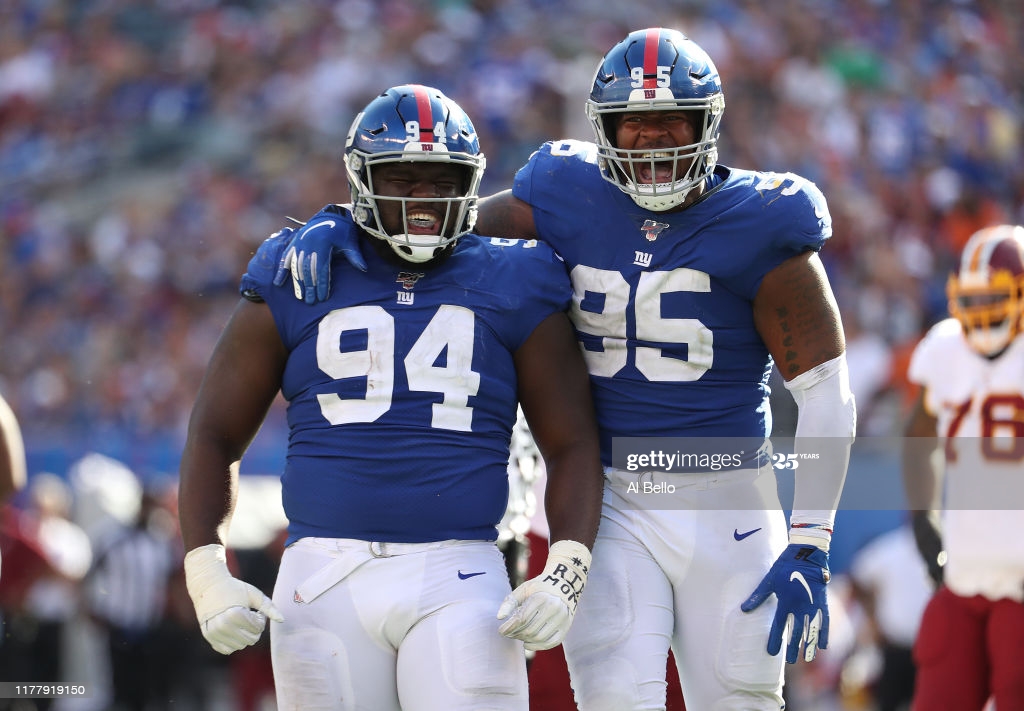 Scouting the schematics of the Giants’ defense is even tougher than the offense. With the offense, you can rely fairly heavily on what Dallas did last year considering they have their OC and OL coach. The defense is a little different. The new DC here is Patrick Graham, who has only one year of DC experience last year running the Dolphins. So I’ve pieced together different teams to try and get a feel for this unit. Watching the Giants last season, the Dolphins in 2019, and Joe Judge’s Patriots last season too. Judge was the STs coordinator but being around a guy like Bill Belichick, you probably pick up a bit of his defensive personality too.

The run defense, personnel and schematic, reminds me a bit of the Cleveland Browns last year. Pittsburgh didn’t have a ton of success against Cleveland, especially in the first matchup. In both games, they averaged under four yards per carry.

New York has a big yet athletic front, guys who remind me a bit of Larry Ogunjobi (but bigger) and a front that wants to deny interior runs. They’re a bit of a multiple unit, kinda reminding me of the Patriots’ defenses from years past, but they’ll run a Bear front with a nose tackle head up on center and two three techs. Cover the center, cover the guards, and make it hard to run inside and for guards to climb/combo to the second level. 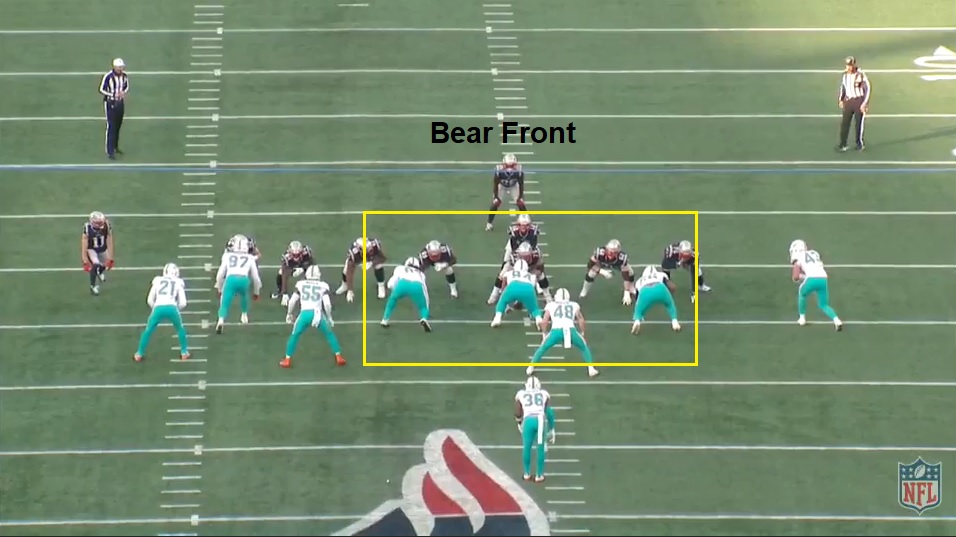 And the Giants’ interior defensive linemen are a load to handle. Base block them and they’re going to win their matchup, get upfield, and create penetration. Like this.

This is a game where you really wish you have David DeCastro. Dexter Lawrence, Dalvin Tomlin, Leonard Williams, BJ Hill, that’s an intimidating couple of guys to handle up front.

Expecting a lot of man coverage from this group. Saw it in New England, saw it in Miami. 3×1 or 2×2 sets, they’re going to play a lot of Cover 1. Goal is to take away the defense’s best receivers, especially over the slot with a safety dropping down to bracket him. Clips of the Pats and Dolphins running it in Week 17. Keep an eye on the slot and safety dropping down to double him.

It’s harder to get a read on how much they’re going to blitz. The Pats run a lot of pressure packages, plenty of stunts, and sim pressure to try to create confusion up front. Saw less of it with the Dolphins, more willing to drop eight into coverage on 3rd down, especially against not-as-mobile quarterbacks like Ben Roethlisberger.

The problem is if the talent can justify some of the scheme stuff they did in New England. Giants don’t have the Gilmore/Chung/Hightower type of talent behind the defensive line. Linebacker is especially questionable here and there have been injuries and off field issues in the secondary. Tom will touch on that below.

To open the 2020 season the Steelers will face a New York Giants defense that has a young core of players with some new veteran faces sprinkled in this year. They will be starting out the 2020 campaign down two starters. The linebacker crew lost David Mayo, their second leading tackler from 2019, to a torn meniscus and rookie safety Xavier McKinney was expected to be a starter but he is dealing with a fractured foot.  Additionally, DB DeAndre Baker is inactive with legal issues and Sam Beal elected to opt out of the season.

The starters along the defensive line consist of three high draft picks leading the way.  The defensive ends, Leonard Williams and Dexter Lawrence were both first round picks and defensive tackle Dalvin Tomlinson was a second round pick. The group does move around along the line depending on situations and personnel groupings. Overall, the group is much better versus the run than rushing the passer.

Williams who came over from the Jets last season plays primarily as the right DE but will line up from the 1 tech to 5 tech and over the center in sub packages when he is the only defensive lineman on the field. He totaled 17 sacks in his first for years but managed just a half of a sack last year.  He struggled to get of blocks and get a push into the backfield overall but his numbers showed some improvement after the trade. Lawrence is entering his second year and he is the left DE. He will also shift around the line and is built more like a DT at 342 pounds. He has solid lateral agility and is able to stay square with the LOS to control his gaps. Tomlinson was the most impressive of the three in the games I watched.  He’s a prototypical nose tackle playing with good leverage and has the play strength to handle double team blocks without being moved off of his spot. He had a solid rip move and strength to walk an OL back into the pocket. The defensive line ran lots of stunts and loops to try to create pressure.

Against Miami, Tomlinson (94) is lined up as the 3 tech on the right side and holds his ground versus a double team block before spinning off and getting in on the tackle.

They are backed up by B.J. Hill who plays in the 1-5 tech spots with solid pad level and is better at playing the backside and shutting down cut back lanes. R. J. McIntosh is a bit undersized listed at 283 pounds and likes to use a long arm/stab to hold off blockers. Austin Johnson is new to the team coming over from the Colts and has a tendency to play too high but has a great motor.

At inside linebacker, replacing Mayo will be Devante Downs. He was signed in October after playing with the Vikings and is somewhat of an unknown. He’s played zero defensive snaps in his first two years in the NFL. Next to him will be veteran Blake Martinez who spent his first four years in Green Bay.  He is hobbled by a foot injury but if he plays you can chalk him up for double digit tackles. He has had at least 144 tackles in each of the last 3 seasons.

Lorenzo Carter is listed at the strong side linebacker and is looking to build off two solid years. He impressed at the Giants recent scrimmage and is best rushing the passer with speed to power moves. On the other outside linebacker spot is Oshane Ximines who is a good tackler and uses quick hands and varies his pass rush plan.  If you see him lined up like a MLB in sub packages he will likely loop to his left to rush the passer.

The backups on the outside have had very productive seasons in the past and are looking to help improve the pass rush.  Markus Golden easily led the team in sacks with 10 and is listed behind Carter on the depth chart. Kyler Fackrell another former Packer had 10.5 sacks in 2018 but little production in his other 3 years. The back-up inside backers are two late round rookies Tae Crowder a former running back still learning the position and T.J. Brunson who is a physical linebacker looking to improve in coverage.

Against Buffalo, Ximines (53) on the left and Golden (44) are both going to rush from the outside, both using hand swipes, and converge at the QB for the sack.

Listed as the left corner back is James Bradberry and he is in his first year with the Giants after four with the Carolina Panthers.  There he was a boundary corner and was comfortable in Zone, Press and Off Man coverages.  He’s been productive with 8 interceptions and 47 pass break ups in his career. On the right side is Corey Ballentine.  In 2018, out of necessity he was used in the slot but is better suited on the outside.  He played at small school Washburn University and was part of the Senior Bowl and showed good toughness, is a good tacker and learned well from mistakes. Jabrill Peppers was on pace for career best numbers last year before being sidelined with a transverse process fracture. He’s known for being a better athlete than football player and is better verses the run than the pass. The free safety is Julian Love and played a lot over tight ends and in the box.  He processes plays well and attacks against the run finishing with 5 tackles for a loss in his 5 games as a starter.  Teams went after him with big tight ends last year so I’d expect the Steelers to do the same.  Recently the Giants signed veteran Logan Ryan and he is a player they can use in many ways. He’s listed as a safety but has played outside and in the slot as well. He was targeted 103 times last year allowing a 66% completion rate and 5 touchdowns.

Here’s a clip of Bradberry (24) playing Zone vs the Buccaneers showing mobility and reading the QB to close and pick off the pass.

Julian Love (24) attacks up field beating the block of Zach Ertz (86) to the inside and makes the tackle for a loss.

The key backups include Isaac Yiadom and recent trade from Denver and Darnay Holmes a rookie from UCLA. Yiadom has good size with adequate athleticism and needs to improve overall technique and fits best on the outside. Holmes had a good camp from reports and fits best in the slot. He has quick feet and hips and closes on the ball well but lacks aggressiveness as a tackler. One other name you might recognize in this position group is Nate Ebner, a long time New England Patriot, but he’ll make his impact on special teams.