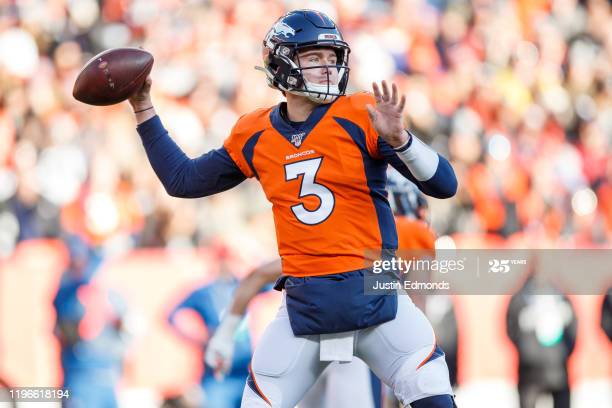 Here’s our breakdown of the Denver Broncos’ offense.

The Broncos’ run game will be led by Melvin Gordon if Phillip Lindsay is unavailable. Gordon had a solid outing in the opener against Tennessee, a 15 carry, 78 yard, one touchdown performance. Got bottled up early but busted a long run late.

This run scheme will run zone, inside and out, but it isn’t the Mike Shanahan/Alex Gibbs zone-only attack like years ago. But they can get the ball on the perimeter.

Little harder to get a feel for the run scheme because I’m just going off Monday night’s game. Denver ran plenty of two tight end sets. Noah Fant played 43 snaps against the Titans while ex-Steeler Nick Vannett and Jake Butt each played 16 of the offense’s 59 total. So expect the Steelers to be in their base defense a good bit this weekend. Denver doesn’t use a fullback but H-Back Andrew Beck logged six snaps in their opener.

As the Steelers have talked about, Mike Munchak is going to have some inside info on the Steelers’ front. Familiar with their calls and verbiage. Hopefully the Steelers are putting in some dummy calls are changing up their language. No fans in Pittsburgh so players and coaches are going to be able to hear everything.

Quick notes on the Broncos’ Week One output. Just 14 points in the loss to Denver. They went 3/9 on third down, an area where the Giants had success against the Steelers (8/15).

Drew Lock returns as the team’s second-year quarterback. He mostly kept the ball underneath, resulting in a high completion percentage (66.7%) but a low YPA (6.5), the latter ranking 23rd of the week. Lock played well but did have two fumbles. Both were unforced errors. The first coming on a bobbled/dropped exchange under center with rookie Lloyd Cushenberry III and another came on a muffed exchange with the RB out of shotgun. Lock recovered the ball both times. He threw one touchdown and no interceptions against the Titans.

Rookie wideout Jerry Jeudy was Lock’s favorite target with Courtland Sutton out. Sutton’s status for Sunday is unknown as of this writing. Jeudy caught four passes on eight targets and showed off his special route-running abilities, which Josh touches on below.

Also as Josh mentions, TE Noah Fant is an emerging star. Caught five of six targets and a well-earned touchdown. 91 yards. Evan Engram was quiet last week but could’ve had a much bigger game after suffering drops and an OPI. Fant could give Pittsburgh a bigger problem this weekend.

The pass game centers around getting Lock on the move. Bootlegs to the right – Dick LeBeau called it defending the dash – to give Lock easy reads, move the pocket, and misdirect/outleverage man coverage. They also do a good job of false key pulling the guard and throwing playaction off of it.

Some examples from Monday below.

In the red zone, they ran this Follow/Angle concept that hit Lindsay for a decent gain. And on 4th and goal from the one, they ran an option shovel to the backside Y that the Titans was able to stop. Clips of both.

Coming off of a short week, the two AFC foes will meet up at Heinz Field on Sunday afternoon for the Steelers’ home opener.

The last time these two teams faced each other, Case Keenum was the starting quarterback and Emmanuel Sanders was the top wide receiver for the Broncos. My, oh my, how things have changed in Denver.

Lock has just six starts under his belt, but he’s looked pretty solid in those six starts, showing off some mobility in the pocket, a rocket for an arm, and a propensity to look for his tight end, Noah Fant.

With Lock’s big arm, he’ll certainly try and squeeze some throws into tight windows, which can lead to turnovers. But as one Bruce Arians once said: “No risk it, no biscuit.”

Lock has really developed some serious rapport with Fant.

Late last season after Lock took over as the starting quarterback, he turned to his fellow 2019 draftee early and often, leading to a major breakout from Fant.

Denver will move Fant all over the place while looking to exploit mismatches.

Here in 2019 on the road against Houston, Denver lined up Fant in the slot against a safety, leading to a touchdown pass from Lock. Look at the ball placement here from Lock. He has so much trust in Fant to make a play on the football no matter what. Realistically, he’s Lock’s go-to guy.

Against the Tennessee Titans in Week 1 to open the 2020 season, the Broncos revealed a new wrinkle with Fant, lining him up inline and letting him leak out on delayed routes.

Both times Denver called for delayed routes for Fant from an in-line position, the second-year tight end chewed up big chunks of yardage on easy pitch-and-catches with Fant.

The first delay for Fant has Lock on the move off of play-action, which is a great wrinkle for the Broncos. The second one though, Lock has to step up in the pocket and scramble due to some pressure. However, that also opens up serious space for Fant, who rumbles for 31 yards.

Keep an eye on these types of plays to Fant on Sunday with the ferocious Steelers’ front 7 applying heat on a second-year quarterback making just his seventh start.

Aside from Fant as a major weapon in the passing game for Lock, all eyes are on 2020 first round pick Jerry Jeudy.

Yes, Jeudy had two big drops in the Monday night loss, but right away he showed his elite-level footwork as a route runner, creating some major separation all night long against a strong Titans’ secondary.

Lined up in the slot here, check out Jeudy’s release. The footwork is impeccable off the line and he blows right past fellow rookie cornerback Kristian Fulton.

Once he’s in the open field, he’s a dangerous YAC guy due to his speed, vision and footwork. He should have the drops cleaned up and will be moved around quite a bit. He’s dangerous.

Jeudy is especially dangerous is Courtland Sutton and rookie KJ Hamler return to action this week after dealing with shoulder and hamstring issues, respectively.

Sutton is the clear-cut No. 1 wideout in this offense and a physical mismatch for any corner on the Steelers’ roster. He’s dealing with a shoulder injury though, which could limit him if he plays on Sunday.

Hamler is another terrific route runner and is a jitterbug with the football in his hands. Along with the top trio, the Broncos have solid depth at wideout in Tim Patrick and DeSean Hamilton.

At tight end, the Broncos are exceptionally deep there as well, with veterans Jake Butt and Nick Vannett backing up Fant, while Andrew Beck is a pseudo H-Back for the Broncos. Rookie Albert Okwuegbunam provides an intriguing vertical threat at the position and has plenty of rapport with Lock having played with him for two years at Missouri.

In the backfield, the Broncos made the head-scratching decision to pay Melvin Gordon III big bucks in the off-season while still employing back-to-back 1,00o-yard rusher and Pro Bowler Phillip Lindsay.

The two split the touches early on Monday night before Lindsay left with a foot injury that could keep him out of Sunday’s game.

Gordon got better as the game went on and ripped off a couple of nice runs in the fourth quarter, including this one that eventually led to a Broncos’ touchdown later in the drive.

Gordon has good vision, speed and some power, but he looked tentative at times on Monday night in a new system behind a new offensive line. With him likely being the bellcow on Sunday, it will be interesting to see how he holds up against a stout Steelers front seven.

The key for him will be a Broncos’ offensive line that added two new pieces through the draft and free agency and is in the second year under OL coach Mike Munchak.

The unit looked solid Monday night. Barring late injuries, the unit should line up like this left to right on Sunday at Heinz Field:

Personally, I am a big, big believer in Risner, who I think can become one of the top left guards in all of football. He’s an athletic, powerful guard with high-level IQ for the position. He’s the rock of this unit.

Bolles has put together some good games as of late under Munchak, but he’s nursing an elbow injury. He should play. Cushenberry is the new age athletic center that really impressed me Monday night, while Glasgow is a veteran mauler with decent athleticism inside.

Wilkinson is the weak link of this group, one that the Steelers should attack.

On special teams, this group is super solid. Kicker Brandon McManus just signed a four-year extension and is as consistent as they come with a big leg. Denver spent big bucks on veteran punter Sam Martin in the off-season. He is quietly very solid and excels at directional punting.

Former Steelers’ camp favorite Diontae Spencer holds down the return duties coming off of a Pro Bowl and All-Pro season in 2019. If you think the Steelers had trouble with Jabrill Peppers on Monday night, cover your eyes when Spencer touches the football.