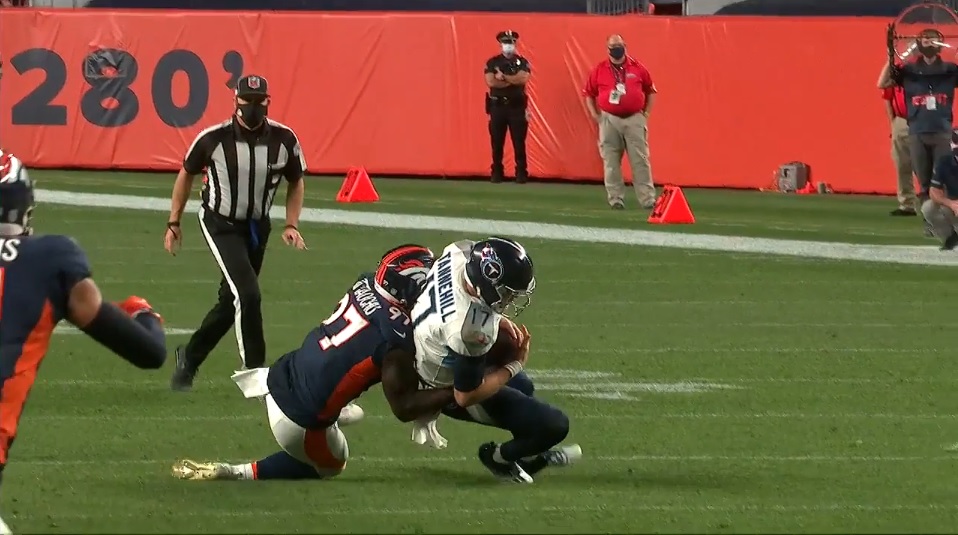 The Titans ran the ball plenty against the Broncos though not the most efficiently. 139 yards on the ground but only 3.8 per carry. It’s a strong defensive line, figuratively and literally, with the likes of Jurrell Casey, Shelby Harris (Steelers’ fans remember him well) and Mike Purcell. It’s a 3-4 front though they have big EDGE rushers. Bradley Chubb weighed in at 6’4, 269 at the Combine and Jeremiah Attachou is listed at 6’3, 252. Guys who could be hand-down ends in a 4-3 scheme.

It’s us going off just one game so a small sample size but the Broncos are an aggressive, attacking front seven. Maybe that was in part due to trying to shut Henry down but definitely a stop-the-run attitude. ILBs Josey Jewell and Andrew Johnson (#45, led the team with 12 tackles last week) are tough and fill the run well while the whole front seven flows laterally effectively.

For what it’s worth, the Broncos’ rush defense last year allowed the 5th fewest rushing touchdowns, were in the top half in opponent average, and ranked 10th in total points per game allowed. So definitely a formidable unit.

Denver allowed just 16 points to the Titans but it could’ve been more had Tennessee kicker Stephen Gostowski not missed three field goals. Worth nothing the Broncos struggled defending the tight end near the goal line. Allowed a pair of one yard TDs to Titans’ tight ends, both coming off playaction. Look for Vance McDonald and/or Eric Ebron to find paydirt this weekend.

Schematically, it’s a healthy mix of man and zone. They like to drop safety Justin Simmons down to rob crossing routes. But because this defense can be so downhill and aggressive, playaction and over routes can defeat them when Simmons can’t probably ROBOT the over. Like here.

In 3×1 looks, they tend to play split coverages, Cover 6, a quarter-quarter-half defense.

One last very important point. Think back to 2018 and remember safety Justin Simmons blocked a field goal. He was able to leap over the line, teammates holding down the Steelers’ line to let Simmons jump over. And Denver’s still doing it. Two clips from Monday’s game. They attack the tackles of the FG protect team, the players inside of the wingbacks. That included a block against the Titans, stemming from Shelby Harris getting interior pressure.

In the first clip, the block, watch the Titans’ #92 on the left side. Gets held down so the adjacent Bronco can leap over. You see the same by #45 and #36 on the left side in the second clip.

For Pittsburgh, those plays are Cam Heyward and Alejandro Villanueva. So Danny Smith better have those guys ready to pop up or some technique to defeat this tactic and make sure the Broncos don’t try to exploit any other player too. Pittsburgh’s will have at least two new players on this unit – Zach Banner and Stefen Wisniewski were the LG and RG last week. Neither will play this Sunday.

In week two the Broncos come to town for the home opener. They have had a couple of injuries to key players on the defense already.

Leading the way for the Broncos defensive line is former Titan Jurrell Casey. The 10 year veteran will be the left defensive end and will kick inside to the 3T on sub packages.  He a highly active and disruptive player versus the run and pass and will get his hands up in passing lanes. Mike Purcell is the man in the middle. He plays the nose tackle in base and the 1 tech in sub packages. He’s a plugger clogging the inside running lane. He plays with a high motor but won’t provide much in the pass rush. At right defensive end is Shelby Harris. Another player with a good motor he is effective chasing from the backside and will get push as a pass rusher.

The primary reserves consist of second year player Dre’Mont Jones who lines up at the 3-5 tech spots. He flows to the ball well and works hard versus double team but struggles getting off blocks. DeMarcus Walker plays inside and has adequate length, is on the lighter side and will drop his head at contact. He was a productive pass rusher in college but has yet to show that in the NFL.

The linebacker group is without Von Miller after needing surgery on his ankle but still has solid pass rushers at outside linebacker. He’ll be replaced by Jeremiah Attaochu another player with a good motor (a lot of this defense has that quality) and has very good athleticism. He is better with quickness than power when rushing the passer and shows good toughness to take on blocks versus the run. He will pursue all over the field. On the other side is Bradley Chubb and he is better as the power pass rusher with a good punch. He has the strength to set the edge and is returning from a torn ACL in 2019. Malik Reed is the primary backup at OLB and is solid setting the edge but struggles to get off blocks. He lacks length and relies on his quickness. Former Steeler Anthony Chickillo was signed off the Saints practice squad on Thursday by the Broncos.

Here is a look at Attaochu (97) and Chubb (55). Attaochu will rush from the far side and dances a bit versus the RB block but gets inside and nearly comes away with the sack.  Chubb rushes from the nearside using a double chop and showing solid bend around the edge.

The inside linebackers are Josey Jewell and Alexander Johnson. Jewell is solid at processing the play but has average athleticism. He’s a strong tackler and can thump a runner when he has a clean look but gets stuck on the blocks of lineman and gets caught up in traffic on outside runs. Johnson has very good athleticism and quickness and he can shoot downhill very quickly. He is a bit erratic and will take himself out of run plays by attacking the wrong gap. Another familiar face is behind them with former Steeler Mark Barron being added just prior to the start of the season but he is unlikely to play. Tennessee used a lot of play action in week 1 to get the LB’s out of position and it will be interesting to see if the Steelers try the same.

In this clip Anderson (45) shows his quickness to hit the gap on a blitz and get a hit on the QB.

The defensive backs are feisty group and had A.J. Bouye and Bryce Callahan starting at the corners in week one.  Bouye suffered a shoulder injury and was placed on IR and reports say he may be out a couple of weeks. Callahan cut his teeth as a slot corner with Chicago and signed with Denver in 2019 missing the entire season with a foot injury.  He’s a good cover corner who supports the run. Think Mike Hilton with better coverage skills. Davonte Harris is listed behind Bouye on the Broncos depth chart but he didn’t see the field on defense in week one but did have 6 starts in 2019. Rookie Michael Ojemudia came in on dime coverages and played on the outside.  He has good size and speed and is best in Zone coverage. Essang Bassey is another rookie and he plays in the slot in Nickel and Dime schemes.  Good athlete who supports the run and can play Man coverage on slot receivers.

Kareem Jackson is the veteran strong safety who played corner in Houston. He has good ball skills with double digit pass break ups each of the last three years and attacks the running game from all over the field. Justin Simmons is the free safety also has nose for the ball with 11 career interceptions and 15 pass break ups in 2019. He has very good size and good tackler supporting the run. He’s a versatile defender who can line up deep or near the LOS. There were a couple instances versus play action when playing near the box that he read the run and had WR running crossing routes behind him. That may be something to look for this week.

Watch Jackson (22) come from about 11 yards off the ball to knife into the running lane to keep the gain short.