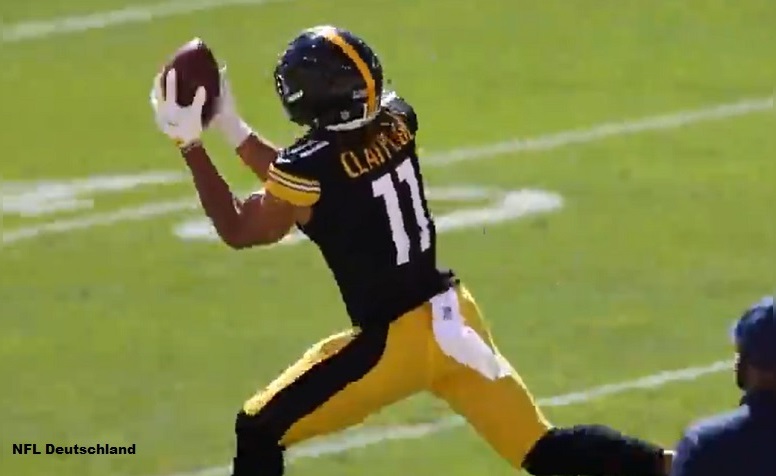 With 6:23 left in the first half of Sunday’s game at Heinz Field against the Denver Broncos, Claypool caught a deep pass down the left sideline from quarterback Ben Roethlisberger after beating the press coverage from cornerback Michael Ojemudia. Claypool caught the pass at the Broncos 45-yard-line and then managed to stay in bounds and run the rest of the way for his first NFL touchdown. The distance? 84 yards.

Another view of the Claypool homerun TD #Steelers pic.twitter.com/E3bDYsuyCb

Claypool described what he was feeling after making that long touchdown reception on Sunday during his postgame press conference.

“It was pretty cool because sometimes you hear the play call and you know you’re going to score or you know the ball’s coming your way, so that was one of those plays where I knew I had a pretty good chance to get the ball and I just had to kind of win on the route,” Claypool said. “And Ben put it in a perfect spot for me to go do that. So, it was pretty cool.”

With it being such a deep pass, Roethlisberger had to make sure he hung the football up in the air a good 49 yards. Claypool talked about the degree of difficulty involved in catching such a pass and what all was going through his head while the football was in the air.

“Yeah, usually it’s kind of tough to focus on the ball when you’re running full speed because your head’s shaking a little bit, but Ben lofted it up pretty good to where it wasn’t that hard to kind of see the ball, if that makes sense,” Claypool said. “So, I really just had to run under it, and it was right there for me so it wasn’t too bad.”

Roethlisberger also talked about his touchdown pass to Claypool after he game as well.

“For Chase’s touchdown, we kind of had the coverage – they were in a zone, but that guy has that deep zone,” Roethlisberger said. “And they blitzed a guy up the middle and so I didn’t have a lot of time, I just kind of threw it far and high and let Chase run under it and he really did all the work.”

Ben in the bucket to the rookie Claypool #Steelers pic.twitter.com/ytOAk9cY4f

While Claypool managed more than his fair share of deep receptions during his college career at Notre Dame, his tape lacked him winning deep down the field as a result of stacking cornerbacks who were in press or man coverage. The fact that his long Sunday touchdown reception included him doing just that is a huge development by him and in the process shows opposing NFL defenses that he’s a legitimate vertical threat in stride and not just a deep contested catch receiver.

In his first two NFL games, Claypool has registered five receptions for 127 yards and a touchdown. He’s playing a decent amount of offensive snaps to start his rookie season to boot and also doing more than his fair share of work on special teams. He’s carved out a nice role for himself after just two NFL games and hopes that will continue to increase as his rookie season rolls on.

“Yeah, I think the coaches are doing a really good job in easing me into the games in terms of they haven’t thrown me in the fire and they’re not asking too much, but to make a play here and there is definitely something I can do,” Claypool said after Sunday’s home win. “And then as the season progresses, I just plan on playing more and more and contributing to that even more.”