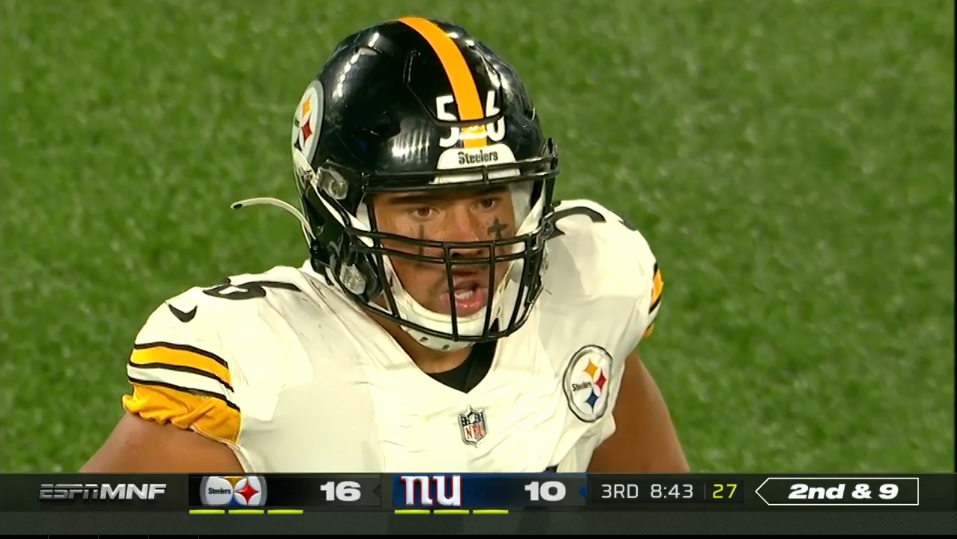 Chase Claypool (2nd Round) – Claypool got the most run of all the rookies playing 19 plays on offense (30%) and 14 plays on special teams. He was on kick cover and with all touchbacks he didn’t have a chance to make a play.  On kick return he was one of the up backs and had a solid block on the fair side of the field on the lone returned kick.  He was the left gunner on punt cover and was very good at beating the block at the line of scrimmage.  He had a chance at couple tackles but was unsuccessful. I think if he learned to settle a big sooner he’ll have a better chance at corralling the returner.

On offense he ran a lot of Go routes, a shallow cross and whip route for his second reception. He was used primarily outside, in the front of the bunch alignment in the slot and as the lone WR in 22 personnel. The first catch was the beautiful, toe-tapping sideline catch. He showed good use of hands versus Press coverage and good acceleration to get past the presser. And his sweep at the end of the game was a nice wrinkle and you have to love the smarts to get down in bounds.  Overall, a positive first game for him.

Alex Highsmith (3rd Round) – Highsmith was second in rookie snaps with 10 on defense (15%) and 18 on special teams. He was on kick cover, kick return, punt cover and punt return. He was a little tentative as a blocker on special teams, looking like he was afraid to draw a penalty, but he’ll get more comfortable there. He and Ola Adeniyi had a nice double team block to open up a lane for the lone kickoff return.  There was a funny instance on blocking for the punter late in Q2. He got pushed into Dustin Colquitt and decided to help him up during the play. I appreciate the courteousness but get downfield and make a play, Alex.

On defense he lined up on both sides and showed good strength to stack and shed the blocks of tight ends. His effort was very good overall and showed a decent swim move and chop while rushing the passer.  He got his first NFL tackle by shedding the block of a TE on the left edge and racing Saquon Barkley to the left sideline to hold him to a one yard gain. He did have one play were he dropped to the flat in Zone coverage as well.

Here he is on the left edge and he’ll use a hop and chop followed but swipe of the tackles hands and flattens to chase the QB out of pocket.

Kevin Dotson (4th Round) – Dotson got in due to the injury to Stefen Wisniewski late in the game and handled himself very well.  His first play was JuJu Smith-Schuster’s second touchdown and gave up some ground initially in pass protection but was able to reset his feet to anchor and stop the rusher in his tracks. He showed good agility pulling to his left and kicking out the edge and walled out a defensive lineman to his right on another play. He also replaced Wisniewski on the field goal team as well.

Dotson only had six plays on offense but they were a strong six.

This was play number one for Dotson. He shows good play strength and anchor to shut down the rusher.

James Pierre (UDFA) – Pierre saw all of his work on special teams. He was the right corner on the punt return team tasked with blocking the gunner.  It wasn’t a strong showing as he allowed too much space to the gunner often giving him an uncontested release. His third rep wasn’t too bad but he must get his hand on the gunner sooner and sustain contact for a longer period of time. I’d expect an improvement this week.