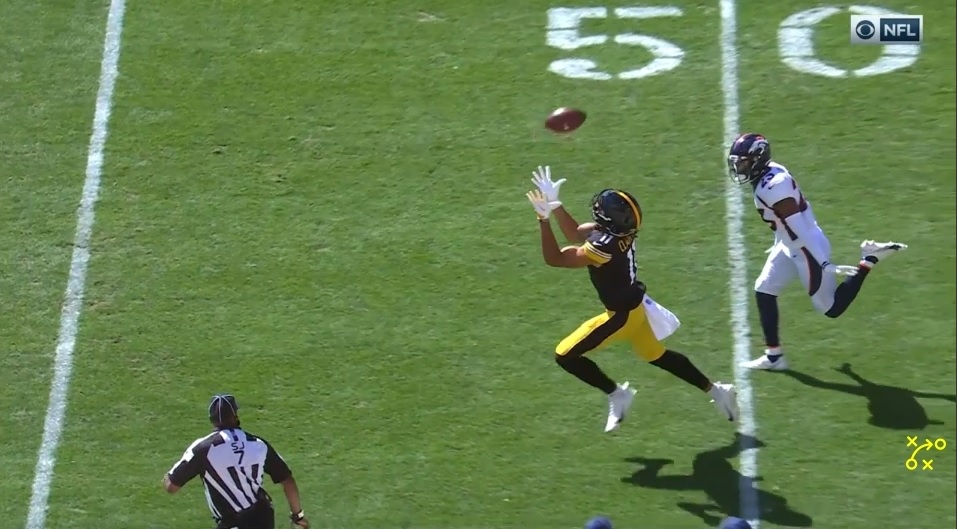 Through two games Claypool in living up to what was expected.  He’s carving out a role on offense. In week two they expanded his route tree a bit to include curls, digs, fades and quick outs. He shows a nice stutter step on a curl to open up space and overall did well creating separation. His touchdown showcased acceleration, hand usage within the route, ball tracking and balance. He made a nice adjustment on his second catch on a low throw on a quick out and the third reception was a pass behind the line of scrimmage that lost yardage. On James Conner’s long run he was one of two players hustling downfield to look to make a block (hint: the other player is listed below).

On special teams he impressed from the get go making the tackle on the opening kickoff and the first punt and added a half a tackle later in the game. He was fun to watch on punt cover as the gunner. He is the aggressor going downfield pushing blockers out of his way to get to the ball.  Blockers were barely getting a hand on him.

Here is Claypool (11) on punt cover. He is the gunner at the bottom of the screen. He gets a free release and as he is heading down field he’s going to push the blocker at about the 50 and then again at the 35 bullying his way to the tackle.

Here is the run by Conner and Claypool will start at the top of the screen. When Conner breaks loose there a two Steelers racing downfield to get into position to try and make a block. It’s Claypool and another rookie.

Highsmith played exclusively on the left side and had a very uneventful game on defense. All but one of his snaps was passing plays and he didn’t get any pressure.  The majority of the plays were to the other side of the field with the QB drifting away from him. He was chipped on 3 or 4 plays and on a few others he was slow to attack possibly reading the play a tad slowly. He showed good chase on a run away from him and was used on a twist rushing the passer as well. He didn’t do anything wrong just not productive.

He did show some improvement on special teams particularly in the punting game.  He looked better blocking for the punter on punt cover and for the returner. He looks to be getting more comfortable there.

Congratulations to McFarland for being active for the first time in his NFL carrier. Unfortunately, he did not receive any snaps.

As I’m sure you have been reading the past couple days, Dotson had a very successful first NFL start. He never looked confused or flustered in any way.  As a pass blocker he showed good lateral agility, hand placement  and leverage. He has a strong anchor and showed good awareness when uncovered.  He looked smooth helping inside with his left hand while looking outside to see if he was needed there. He did not allow a pressure in the game which is impressive. I’ll add this. The Broncos rushed more than 4 players on only 8 of 42 drop backs so there weren’t a lot of blitzes or heavy rushes. That being said, what they did throw at him he handled.

Here is an example of Dotson (69) in pass protection. It shows his hands strength and footwork to lock on and mirror the pass rusher.

As a run blocker he showed the ability to execute in different ways.  He can use his power and move people. He can pull and clear the road. He can use footwork to turn and wall off defenders.  It was good all around.  His most impressive trait overall may be his hand strength.  When he locks on to defenders they couldn’t get him off.  He was the other player to run downfield looking to possibly make a block on the long run by Conner. There was one play on outside Zone to his right that he got pushed back a bit but there weren’t a lot of things to not like.

When you’re at the goal line and you want to run the ball, who do you run it behind? Your rookie right guard of course.  Dotson (69) use a little gallop step to nudge the defensive tackle before heading to the second level to square up and turn the inside linebacker to clear a lane.

Pierre played the same role he did last week as the right corner blocking the gunner on punt return and the bullet on the kick cover.  The bullet is the farthest player on the outside and is usually the safety hanging back a bit in case the returner breaks through.  He did show some improvement blocking on punt return. He did have some help on a couple of returns but when he was alone he did a better job of disrupting the gunner’s route to the ball. He did make an effort to block two different players on the first punt.