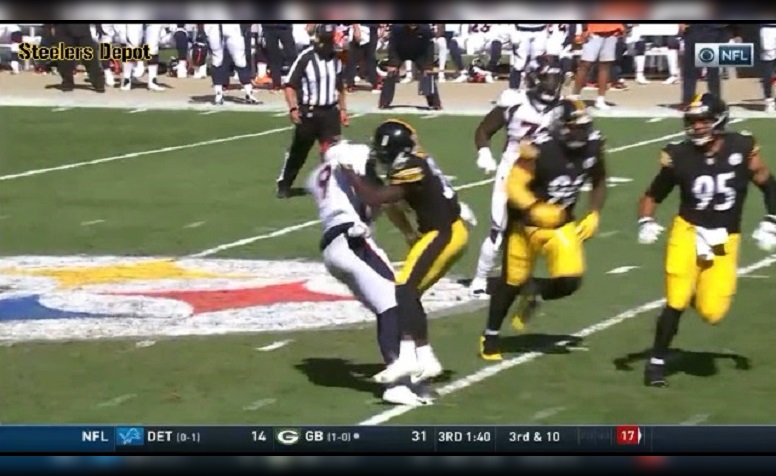 Pittsburgh Steelers cornerback Mike Hilton had a fine game against the Denver Broncos in Week 2 that included the former undrafted free agent registering 8 total tackles, one sack, one pass defensed and a fumble recovery. Hilton, however, was also penalized once in that contest for roughing Broncos quarterback Jeff Driskel and he has since been fined by the league for that action.

According to Joe Rutter of the Pittsburgh Tribune-Review, Hilton was fined $15,000 for his roughing-the-passer penalty in the third half against the Broncos. Additionally, Steelers safety Minkah Fitzpatrick was also fined $11,619 this past week for his horse collar tackle on Broncos tight end Noah Fant in the third quarter of the team’s Week 2 Sunday game at Heinz Field.

Fitzpatrick’s illegal tackle on Fant came at the end of a 3rd-and-6 completion to Fant from Driskel with 9:07 left in the third quarter and that penalty resulted in the Broncos having the football at the Steelers 4-yard-line. However, the Broncos were unable to finish the drive with a touchdown and had to settle for a field goal.

The Steelers weren’t so lucky following Hilton’s penalty, however. On the next play after Hilton was flagged for roughing Driskel on a 2nd-and-10 incomplete pass to tight end Nick Vannett, the Broncos quarterback connected with Fant for a 20-yard touchdown on 1st-and-10 play with 1:11 left in the third quarter.

In total the Steelers were penalized 10 times for 89 yards in their Week 2 home win against the Broncos with six of those being called on the team’s defense.