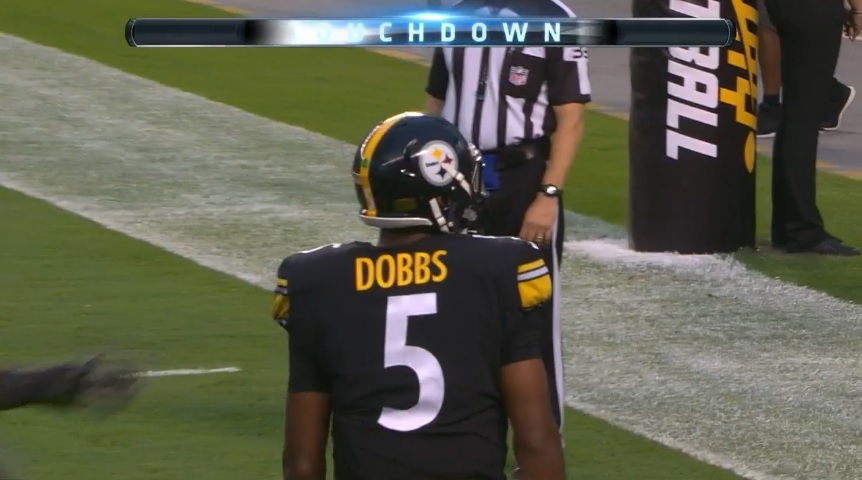 The Pittsburgh Steelers will have a new quarterback on their roster on Sunday and it’s one they have had before. According to Field Yates of ESPN, the Steelers are claiming Dobbs off waivers from the Jacksonville Jaguars.

The Steelers claimed QB Joshua Dobbs back off of waivers from the Jaguars.

The Steelers traded Dobbs to the Jaguars for a fifth-round draft pick in Week 2 of the 2019 regular season.

Dobbs was originally drafted by the Steelers in the fourth-round of the 2017 NFL Draft out of Tennessee. In his first two seasons with the Steelers he completed 6 of his 12 total pass attempts for 43 yards. He played 30 offensive snaps in total. Last season with the Jaguars, Dobbs didn’t play a snap.

The claiming of Dobbs on Sunday will result in quarterback Devlin Hodges being waived. It will now be interesting to see if Hodges is re-signed to the practice squad after he clears waivers.

Dobbs is scheduled to earn $825,000 in 2020, the final year of his rookie contract that he originally signed with the Steelers.

What is the main value in bringing back Dobbs? For starters, he’s and all-around better quarterback than Hodges is and he knows the Steelers nomenclature as well. Beyond that, Dobbs being back just from a scout team perspective is quite great as he will now probably give the Steelers defense good looks when imitating Baltimore Ravens quarterback Lamar Jackson in practices leading up to those contests.