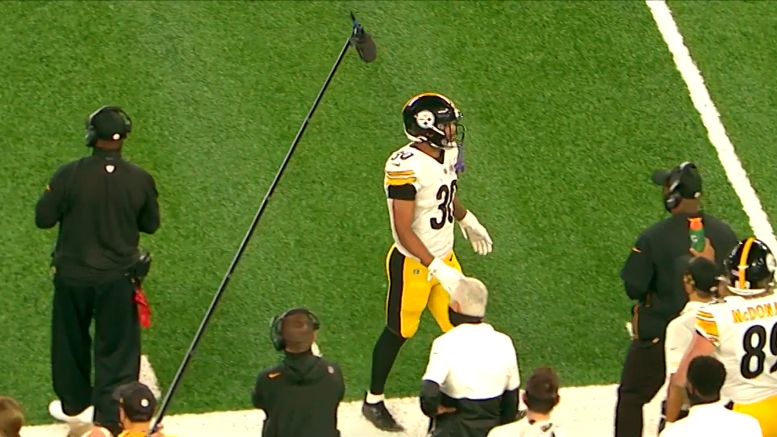 Pittsburgh Steelers running back James Conner practiced fully on Thursday with an ankle injury after sitting out the team’s Wednesday session and on Friday he indicated there’s probably a good chance he’ll play Sunday against the Denver Broncos.

Conner indicated during his Friday media session that the ankle he injured Monday night against the New York Giants is “definitely trending in the right direction.”

#Steelers RB James Conner says he's practiced the last two days and things are "definitely trending in the right direction." When asked about starting, and remaining as the starter, he says, "I'm not a selfish guy."

In Monday night’s win over the Giants, Conner rushed for 9 yards on six total carries with a long of 3 yards. He also had two catches for another 8 yards before an ankle injury forced him from the game after he had played just 15 snaps. Conner was mainly relieved in the contest by Benny Snell Jr, who managed to rush for 113 yards on his 19 carries.

Assuming Conner practices fully again on Friday, it will then be interesting to see if he winds up starting over Snell on Sunday against the Broncos. Conner was asked about starting, and remaining as the starter, on Friday during his media session.

Even if Conner does start against the Broncos, odds are good that Snell will wind up getting a fair amount of carries as well. On Thursday, Steelers offensive coordinator Randy Fichtner praised Snell for his play against the Giants.

“But I was proud of Benny” Fichtner said. “Benny just keeps improving. He’s part of that young group, him and Diontae [Johnson]. Just that natural development from year one to year two is exciting to watch. You see it being developed. I think I had mentioned it a couple weeks back in training camp that both of those guys came back in excellent position, right frame of mind, and have done nothing to but put themselves in position to continually get better and they have to.”

The Steelers Friday injury report will be out after the team finishes up their practice.