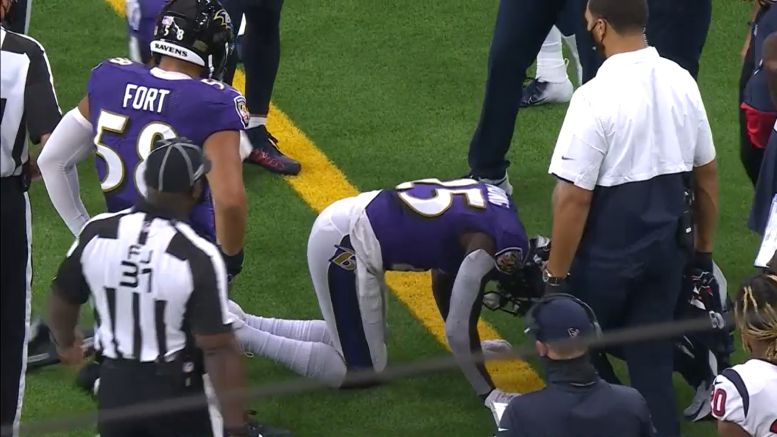 The Baltimore Ravens are 2-0 with another convincing win, this time against a known quality opponent in the Houston Texans, even if they are now 0-2 on the season—with two losses to the top two seeds in the AFC a year ago. And they will visit the Pittsburgh Steelers next week.

Baltimore’s next opponent is no slouch, either, as they will host the Kansas City Chiefs, but when they do, they will be down one defensive back, as they believe that nickel back Tavon Young will be lost for the season after sustaining an injury in their victory on Sunday.

If proven true, it will be Young’s third season-ending injury in five seasons. He already missed all of the 2019 season and all of the 2017 season due to separate injuries. But for the 33 games he has been on the field, he has performed at a high level, including seven takeaways and two touchdowns.

Early in the game, on the Ravens’ second defensive possession, Young came down awkwardly after going up in the air to attempt to break up a pass. He left the game with a knee injury and never returned. He likely will not return this season.

Fortunately for Baltimore, they already have the best starting cornerbacks in the NFL in Marcus Peters and Marlon Humphrey, both of whom were All-Pros last season. Peters had a great diving interception yesterday, and Humphrey forced yet another fumble—which L.J. Fort recovered and brought into the end zone for a score.

While the loss of Young will be a blow to the secondary, the reality is that they went 14-2 without him just last season. They have a number of options for that role, including Jimmy Smith, a former long-time starter on the outside, as well as Anthony Averett.

Prior to the start of the 2019 season, the Ravens made him the highest-paid player in NFL history who exclusively played in the nickel, giving him a three-year extension worth nearly $26 million. Since then, he has played in one full game and about a quarter of another.

It’s terrible luck for a legitimately good player, and it’s tough to see, regardless of the potential competitive benefit the Steelers might see as a result of their losing a good player. He is already the second significant loss to their starting five in the secondary after they were driven to release Earl Thomas for his conduct they deemed detrimental to the team.

But they will stick by Young as he heals, and I think we know they will also continue to win games without him. The Steelers just have to hope that they can rack off win for win and then worry about their head-to-head matchups when they arrive, starting in Week Seven.