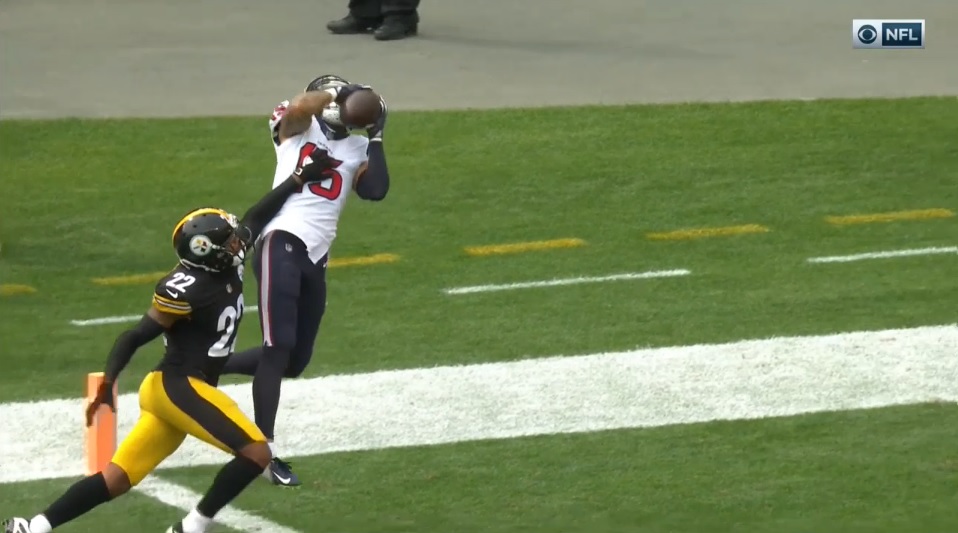 It wasn’t a promising start by any means, but all that matters is the finish and the Pittsburgh Steelers closed it out in style, punishing the Houston Texans in the second half, picking up a 28-21 win to move to 3-0 on the season.

The win on Sunday at Heinz Field sent Ben Roethlisberger into the franchise record books in style, giving him a win in his franchise-record 221st game in Steelers’ history.

At the half things were a bit concerning as the Texans struck late, but make Houston 37-4 in games that they lead at the half under Bill O’Brien as the Steelers mounted a comeback in the second half to remain perfect on the year.

Roethlisberger looked really shaky early as he misfired on a handful of deep balls to Diontae Johnson and James Washington, but he threw a beautiful strike to Eric Ebron for a touchdown and took advantage of a coverage bust for a 26-yard touchdown to JuJu Smith-Schuster.

I thought Ben was a lot better in the pocket today and extended some plays to give his receivers some chances downfield, and I don’t care what the final ruling was on that scramble against Whitney Mercilus; that was a first down and a great job by Ben.

I’d like to see him figure out the deep ball over because he’s hot and cold week to week, but it’s tough to find much to complain about with Ben right now. He’s making all the right reads and getting everyone involved.

I feel sorry for the people who wrote him off after Week 1 and were ready to hand the backfield to Benny Snell.

Conner was terrific on Sunday, forcing missed tackles, getting downhill behind a convoy of blockers and really helped the Steelers take over the game, especially late. It’s so good to see him healthy.

Make it back-to-back 100-yard games for the Pittsburgh product.

Aside from Conner, it was great to see the rookie Anthony McFarland have such a big role. I knew he’d rip off an explosive run or two, and he did that right away. His speed is game-changing, just please don’t use him in short yardage again, Randy Fitchner.

Snell did what he had to do when he saw that field, and that was convert short-yardage situations.

I really like the makeup of this room if it’s this trio getting the touches.

Not the best day overall for this group, but they did what they needed to do drive after drive to help the Steelers win the football game.

I continue to be really impressed with Smith-Schuster’s physicality early in the year. That first down he converted early in the game was pure determination.

James Washington continues to look like a real possession receiver. He flashed strong hands throughout the game despite one drop across the middle.

Chase Claypool was targeted quite a bit but had just the one catch for 24 yards to show for it. He should have drawn a pass interference or holding call on Bradley Roby in the second half, but the refs missed it. He also needs to show better ball security, especially late in the game. That fumble late can’t happen.

Welcome to the Steelers, Ebron.

That was a really good game for the free agent acquisition. He lined up all over the field and had a ton of success against defensive backs, taking advantage of mismatches while helping put points on the board and move the chains.

Vance McDonald had a really solid game as well, showing his power after the catch a few times and really came to life as a blocker as the Steelers really punched the Texans in the mouth. His pull left late in the game helped spring Conner on his 25-yard run.

It certainly wasn’t pretty early from a pass blocking perspective, but the Steelers’ offensive line adjusted to give Roethlisberger time, and later got downhill in a hurry against Houston’s front seven, helping seal the win.

I was really pleased with Chukuma Okorafor against the Texans, as he helped thwart JJ Watt and Jacob Martin throughout the game. Neither Watt nor Martin recorded a quarterback hit or tackle for loss in the Steelers’ win.

Inside, it was great to have David DeCastro back from injury. I don’t think it’s a coincidence that the run game, especially power, got going for the Steelers with DeCastro out in front.

Talk about taking the run game away completely.

Tuitt was flat-out dominant, recording a sack, four tackles and four quarterback hits in the win, while Heyward and Alualu held strong against the point of attack. Alualu batted down a key pass in the win as well.

Vince Williams is quite the player at this point in his career. He really set the tone early, lighting up David Johnson in the backfield and sacking Deshaun Watson.  I thought Williams was pretty solid in coverage as well.

Devin Bush continues to flash sideline to sideline and finally caused some havoc in the backfield with half a sack on Watson.

Outside, Bud Dupree and TJ Watt are just an incredible duo. Sure, they didn’t have the massive stat lines on Sunday, but they got the job done when needed as both finished with at least a sack. In fact, the duo combined for six quarterback hits on Watson.

I also really liked what I saw from Alex Highsmith and Ola Adeniyi in limited snaps. Highsmith had a great tackle for loss on David Johnson, and Ola flashed some juice as a pass rusher.

I’m starting to get worried about Steven Nelson. He gave up an easy touchdown to Will Fuller V as he was late to get his head around. Teams are really starting to go after him.

Joe Haden really didn’t give up the big play on Sunday, which was a positive.

All that said, the best player on the field for either team Sunday was Mike Hilton. He’s going to get PAID.

Hilton led the Steelers with eight tackles, had a huge tackle for loss on a screen pass, and picked off a pass that helped turn the tide for the Steelers on Sunday.

At safety, I thought Minkah Fitzpatrick had a better game compared to last weekend, while Terrell Edmunds built on a strong game last week with a really sound game Sunday. He’s tackling well and is finding himself around the football more and more.

Obviously the Texans struck for some big plays through the air, but guys can only cover for so long. Watson created a number of plays with his legs, which led to some throw windows opening up down the field as the play breaks down.

What a find Ray-Ray McCloud has been.

Filling in for Diontae Johnson, who was concussed early in the game, McCloud handled punt return duties well and made something happen on both returns. As a kick returner, McCloud is so close to busting one for a touchdown. He’s getting so close. It’s only a matter of time.

Chris Boswell was solid once again, drilling both kicks. Punter Dustin Colquitt had a much better week, averaging just over 44 yards per punt, getting good hangtime on punts to give his coverage units a change.

The only real gaffe on special teams was Johnson catching the first punt of the game at his own 4-yard line. Danny Smith has got to get him to clean that up.