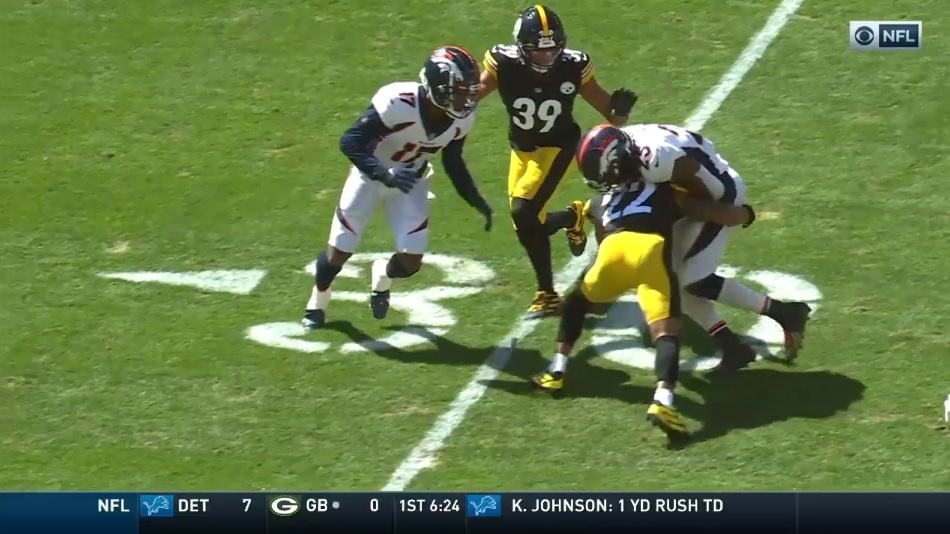 As the Steelers move further along into the 2020 regular season, the tackling is getting better and better.

One week after opening the season with 11 misses at the New York Giants, the Steelers returned home to Heinz Field against the Denver Broncos and improved upon their tackling performance. Additionally, the Steelers saw a young emerging star rack up an insane amount of forced missed tackles against the Broncos, giving Steelers fans a taste of what’s to come this season.

Bud Dupree is on some kind of tear to open the season, but I’m sure he’d like to have a couple of missed sacks back in the process. The same goes for TJ Watt and Stephon Tuitt. Sunday’s game could have been a lot uglier for Broncos quarterbacks if Dupree, Tuitt or Watt could have finished off sacks.

Aside from the missed sacks on Sunday, you’ll notice not a single special teams tackle was missed by the Steelers, showing a marked improvement from Week 1.

Overall, you’d like to see guys like Minkah Fitzpatrick and Devin Bush clean up some misses from Sunday, but it’s going to happen when you’re around the football as much as those two are.

Let’s take a look at some of the misses from Sunday.

I went back and forth on this one multiple times, but decided to give both Tuitt and Dupree misses here on Drew Lock early in the game. The Tuitt one was tough because it’s a tough play to make, but it’s one I’ve seen him make time and time again in his career.

Same for Dupree’s miss on the perimeter. Lock did a nice job keeping the play alive though.

If you feel it’s not a miss for either guy, let me know in the comments below.

Later in the first quarter, the Broncos got Melvin Gordon III going and he really started dishing out some body blows to the Steelers’ secondary.

First off, that’s a massive cutback lane the Steelers’ front seven left for Gordon to reach the secondary.

Once he’s there, Minkah does a really good job of breaking down to fill the lane, but he dips his head at the last second, allowing Gordon to have the final move and spin out of it. The spin off of Fitzpatrick likely played a role in Steven Nelson’s miss as Gordon continues to spin after contact there before being wrestled to the ground.

The last miss by the Steelers’ defense I wanted to highlight here was this catch-and-run by Denver rookie Jerry Jeudy.

He runs a delayed route into the flat after having two clear-out routes over the tope, giving him a ton of room. Bush does a good job coming downhill to cover Jeudy, but he overpursues slightly as Jeudy stops on a dime and turns back inside, forcing the Bush miss.

Dupree tries to clean it up, but he’s out of control as Jeudy slip inside him. Fortunately for the two Steelers’ linebackers, Bush stayed in phase and recovered to make the stop.

Johnson forced nine misses on the afternoon with the football in his hands and should have had 14 total if not for his punt return for a touchdown called back on a block in the back on Cameron Sutton.

Johnson is simply electrifying in the open field.

You’ll all undoubtedly seen the Johnson return on the punt following the safety in which he forced five missed tackles in a dazzling display of elusiveness.

How about his first punt return of the game though? Johnson showed some power to break through some tackles on the 18-yard return.

I’d like to see him not catch the ball inside his own 10-yard-line on punts, but when he does stuff like this, it’s hard to get mad at him overall.

One thing I loved about Smith-Schuster’s game on Sunday was that when he was near the boundary there wasn’t a thought of going out of bounds at all. His second catch of the game he bowled through a pair of Broncos defenders to grab a handful of additional yards. Here, he threw Ojemudia into the turf with the pylon in his sights, setting up James Conner’s 2-yard plunge one play later.

Smith-Schuster is setting the physical tone for the Steelers’ wide receiver room. Let’s see if it continues to pay off.