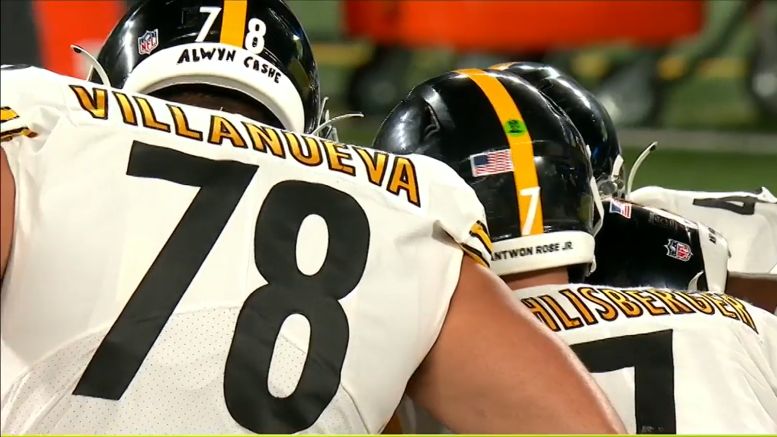 It’s a good thing there won’t be any fans when the Pittsburgh Steelers take the field for their home opener on Sunday against the Denver Broncos. It will ease any burden, such that there is, that was placed on the roster after the team at the organizational level bungled their ‘united’ social justice messaging during the season opener.

While it got off to a good start, with everybody participating in raising a banner that simply read, ‘STEELERS AGAINST RACISM’, the prior words and documentation of claims that the team would present a united front and everyone would wear the same name of a victim of a police shooting immediately backfired when Alejandro Villanueva opted to wear another name.

We have discussed the matter at length already, but it has I believe been put to bed over the past 24 hours, and the blame appears to fall squarely on the shoulders of the higher-ups, rather than the players, including Villanueva, who was made once again to look like a rogue agent due to the lack of clarity available.

Yesterday, Minkah Fitzpatrick told reporters, “we knew we were going to have somebody on the back of our helmets and it wasn’t exactly clear on what it was going to be”, according to Will Graves of the Associated Press. “It was mostly made by everyone upstairs”.

Similarly, linebacker Vince Williams the day before said on Instagram live that there was some confusion, and that he didn’t even know or look at the back of his helmet. From appearances, it seems as though the decision that players would wear one name, and what name that would be, was primarily a matter decided above players’ heads, without a great deal of final input as a group. Still, nobody believes this will be an issue, ongoing or otherwise.

“We all come from different places, different backgrounds, everything else like that but when we’re out on the field, we have the same goal, the same mindset and that’s to win a game at hand”, Fitzpatrick said. “We’ll go out there in the locker room, be a team and work it out”.

He said that there are no cohesion issues, that they’re all “grown men”, and while these issues do matter to the players, “we’re going to put our opinions to the side and go out there and we’re going to have our conversations and talks in the locker room”.

As I stated yesterday, this was an easily avoidable an unnecessary controversy that created a lot of hurt and rancor for no reason, to the point that Art Rooney II felt the need to issue a statement letting it be known that the organization supports the right of players to make their individual decisions.

It is readily apparent by now that not all players will be wearing the same name on their helmets this week as they did on Monday night. Maurkice Pouncey, for example, said on Instagram that he felt he had limited information at the time it was decided what the team would do. Some players may not even have been aware of what name was on their helmets—or even who that name belonged to.

As you can no doubt see, we have chosen to leave the comments open for this article after holding a discussion about it. We believe the further developments over the past 24 hours and the time that has passed may lead to the community being more tactful and respectful in their discussion on the matter.

If it is not, however, please be advised that we will close the comments, and will have to again reconsider continuing to do the same for further articles in the future. Accordingly, we will be monitoring the comments section—not policing it, but seeing how it is handled and whether or not it is contributing positively or negatively to the community that we have built here and depend upon for more than a decade.