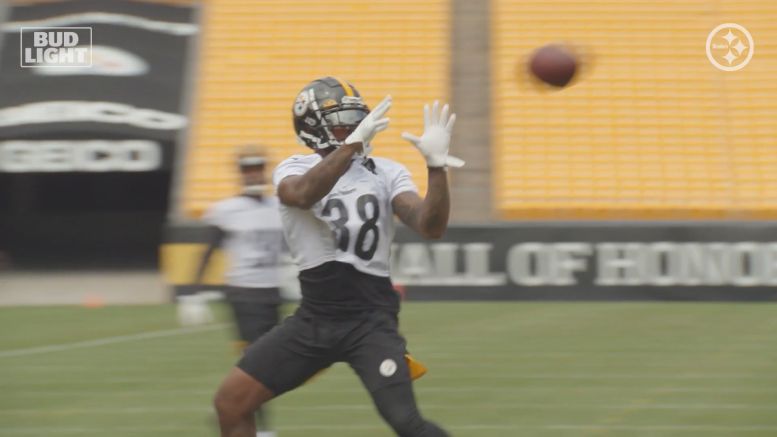 With the Pittsburgh Steelers drafting their fourth running back in as many years in the middle rounds of the draft, many questioned the job security of third-year back Jaylen Samuels entering the 2020 season. We will know in two days what the team is thinking in that regard, but head coach Mike Tomlin offered him some praise after practice today.

It is noteworthy because he is a player that we have heard little about, even within the running back room. Aside from Trey Edmunds and Kerrith Whyte, who has missed time with injury, he is probably the player about whom we have heard the least, and he plays a position that gets attention in a practice setting.

“He’s continuing to be impressive with his versatility”, said Tomlin, though it is a remark that might be perceived as sort of a backhanded compliment. “I think that is the thing that has always kind of distinguished him in a competitive setting among his peers, his ability to do a variety of things at a relatively high level, particularly in the passing game and outside the backfield with his hands and route-running. It is above the line from a running back perspective for sure”.

A fifth-round pick out of North Carolina State in 2018, he had a rookie season notable enough that the Steelers ended up hiring his college position coach to be their running backs coach in 2019. That year, he rushed for 256 yards on 56 carries, but more notably, caught 26 passes for 199 yards and three touchdowns. He averaged 5.5 yards on 82 touches with three scores.

The 2019 season did not go nearly as well for him. In fact, it was frequently quite bad. It did not help that he suffered a knee injury that necessitated a quick in-season cleanup procedure and cost him two games, but by the end of the season, he gained just 2.7 yards per carry on 66 attempts, and his receiving efficiency dropped as well—not to mention, he dropped a number of passes, which wasn’t an issue in his first season.

I think it’s fair to say that he was not himself a year ago and can certainly offer better. Still, his even making the roster is predicated on the team’s willingness to carry four running backs in addition to a fullback, behind James Conner, Benny Snell, and rookie fourth-rounder Anthony McFarland.

I do believe that they will carry four backs, and he is the most likely of the group to be that fourth, but veteran Wendell Smallwood is also in consideration. Whyte’s missing time in practice has done him no favors (Smallwood missed time as well), but Samuels’ receiving ability and special teams reps give him an edge in a truncated offseason.