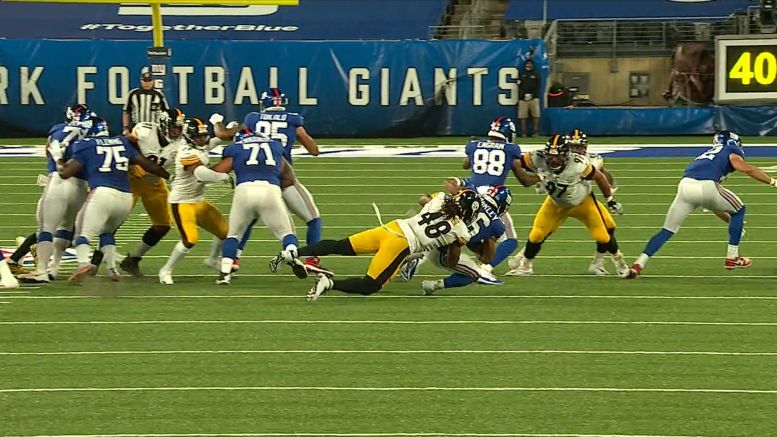 It’s fair to say that, even without an official sack, Pittsburgh Steelers outside linebacker Bud Dupree had an awfully good game on Monday night against the New York Giants. He finished with four total tackles, including two tackles for loss, one quarterback hit, and a pass defensed, which led to Cameron Heyward’s interception in the end zone.

But as is usually the case—or always the case—the stat sheet doesn’t tell the full story. It doesn’t account for his success against the Giants’ left tackle, a matchup that he clearly won, and through which he was able to generate a good deal of pressure. Even Pro Football Focus had him as one of the highest-graded defenders of the week.

“Bud is a dangerous guy”, head coach Mike Tomlin told reporters yesterday during his Tuesday pre-game press conference. “As is T.J. When you get an outside linebacker tandem like that in the 3-4 defense, you have an opportunity to play great defense, and we’re cognizant of the contributions of those two men and appreciative of it, and that’s why we’re excited about the group that we have”.

Of course, Dupree is only one half of the Steelers’ pass rush duo, the other half being T.J. Watt, now in his fourth season. Neither of them actually managed to get on the stat sheet in terms of sacks, but both were dynamic and impactful players over the course of the game—and while Dupree’s pressure led to an interception, Watt got one for himself.

Dupree is now in his sixth season in the NFL since the Steelers used their first-round draft pick on him back in 2015. He had a breakout season in year five in 2018 while playing under his fifth-year option, registering 11.5 sacks and 16 tackles for loss, in addition to four forced fumbles, and two recoveries.

As for Watt, we remember what he did last year, coming close to winning the Defensive Player of the Year Award, which would have made him the first Steeler to win since Troy Polamalu secured the honor at the end of the 2010 season when he led the league with seven interceptions.

The two of them together, particularly since the start of last season, has been a lethal combination that defenses are finding it hard to combat. When you add in Heyward and Stephon Tuitt in the middle, it’s only more hectic.

But how much longer will it last? With the expected collapse of the salary cap next year, it doesn’t appear to be a very realistic prospect that the Steelers would be able to afford to retain Dupree in free agency in 2021 the way they did this past year, using the franchise tag.