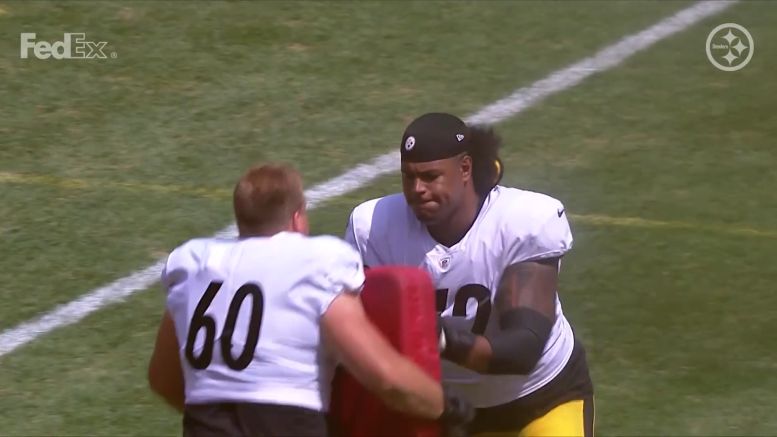 While Pittsburgh Steelers head coach Mike Tomlin sounded fairly optimistic about the nature and severity of the injury suffered by veteran offensive lineman Stefen Wisniewski, who started last night’s game in place of the injured David DeCastro, it is not immediately clear if he will miss time, and if so, how much.

Provided that Wisniewski is out, that would thrust rookie fourth-round pick Kevin Dotson into the starting lineup—with some trepidation, as Tomlin acknowledged. It would also seemingly put first-year center J.C. Hassenauer one step away from playing in an NFL game for the first time in his career, after making the 53-man roster this season as the ninth lineman.

A product of the Alabama pipeline, which is known to produce offensive linemen, Hassenauer wasn’t one of the premiere prospects, going undrafted in 2018. He was signed by the Atlanta Falcons, and spent most of the year on the practice squad.

After failing to find a contract, he joined up with the Alliance of American Football and played for the Birmingham Iron, eventually working his way into a starting role. The Steelers signed him after the league folded. While he didn’t make the practice squad over Patrick Morris, he was signed after Maurkice Pouncey was suspended after Week 11, and remained there after Morris was claimed off waivers.

So long as Wisniewski is sidelined, Hassenauer, who did dress last night because of DeCastro’s injury, will be the backup center unless the Steelers add another lineman. Based on Tomlin’s comments earlier today, it doesn’t sound as though that is the plan.

“He’s a very capable backup”, he said. “A guy that we are comfortable with in terms of knowing what to do and having an understanding of his skillset. He’s an interior backup rotational player that is capable of being called upon if need be”.

Hassenauer played 90 snaps for the Steelers during the 2019 preseason, with over a third of those snaps coming at center. Of course, he did not play in the preseason this year because there wasn’t any, but the team obviously felt good enough about his showing that they felt comfortable keeping him on the roster.

This is the second time that he has been on the 53. He was also the backup center for last year’s season finale after Pouncey suffered an injury in Week 16. B.J. Finney started at center. Hassenauer was all that they had left.

They do have one option to bring in a player with experience. Morris did not make the Denver Broncos’ 53-man roster earlier this year, but he was re-signed to the practice squad. The Steelers could sign him to their 53-man roster if they still believe he is the better player—provided that Denver doesn’t protect him.

The Broncos did not protect Morris last week, but they did protect another former Steelers lineman in tackle Jake Rodgers. Safety P.J. Locke, who was in camp with the team last year, was also protected.