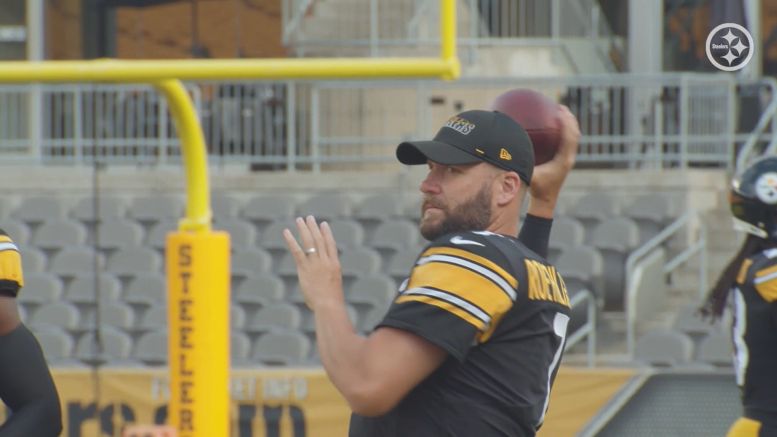 There is no bigger question surrounding the Pittsburgh Steelers’ 2020 season than the health and performance of quarterback Ben Roethlisberger. This is generally true of the franchise quarterback of any team in any given year, but it takes heightened importance when that quarterback is 38 years old and coming off of a surgery that is apparently a first, reattaching three tendons in your throwing elbow.

The news has been consistently positive in his recovery, of course. As head coach Mike Tomlin said yesterday on the appropriately named Mike Tomlin show, the team “had very little medical reservations as it pertained to his health”.

“We just relied on the expert medical advice of our medical team, and they’ve been in continual and constant communication with him”, he said, “not only about the surgical procedure, but the aftermath, the rehab, and they’ve all done a good job, including Ben, in terms of communicating and approaching that in the appropriate, yet aggressive, manner”.

Throwing the ball in his backyard and going through training camp are different stories though. There was a whole new set of questions with each step of the way—and there are still more questions to come, including whether or not he will continue to improve.

“In terms of his overall health, I think it’s been really good. I think it hadn’t affected how he’s worked at all”, Tomlin said of Roethlisberger through the training camp experience. “He’s worked in a very similar manner that he has during preseason processes in recent years”.

Tomlin mentioned early on in training camp that there were still things from Roethlisberger physically that he was looking to see. One was velocity. The other was the spiral that he was putting on the ball. One was taken care of, while the other remains a work in progress.

“I see no issues relative to his velocity. He and I both have spoken about it a number of times. I’ve seen his spiral tighter in the past, and so has he, but we are both comfortable in believing that that’s gonna develop over time as he continues to get back on track”, he said. “But from a velocity standpoint, his ability to deliver the ball to different points on the field and the things that we’ve become accustomed to him displaying appears to be ready to go”.

Truth be told, Roethlisberger has never delivered the tightest ball in the NFL. Look at any highlight reel and you’ll see plenty of big plays being made on balls that don’t look like they have any right to be able to get to where they were going.

But from the sounds of it, Roethlisberger and Tomlin appear to believe that there is still room for improvement from the quarterback in terms of how he will throw the ball in 2020. Assuming that that growth is needed, then that is a good thing. Let’s just hope it gets there sooner rather than later.