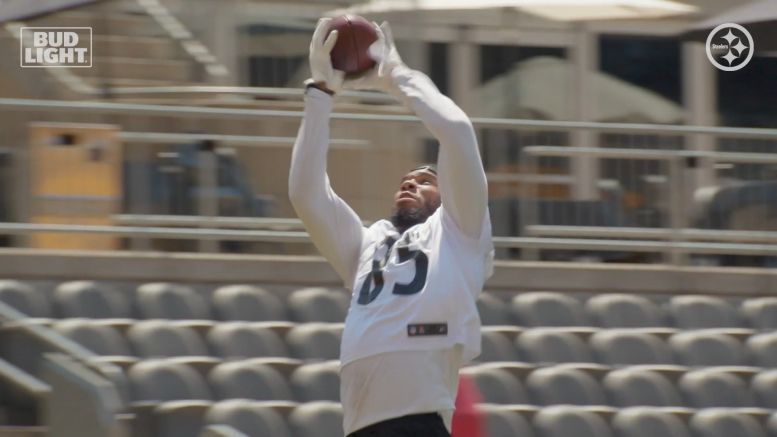 When you play against a guy and you go through game prep and you realize that you have to make specific plans for one person in particular, trying to find ways to prevent him from beating you, you might have a tendency to want him on your team down the road.

This is a preferable strategy to relying on just looking at who beat your team and assuming they’re really good and signing them, rather than looking at your entire body of work, which some teams can be guilty of at times.

That’s not the case for the Pittsburgh Steelers’ signing of Eric Ebron, who has a consistent but (generally) ascending body of work as a receiving tight end since being drafted in the first round of the 2014 NFL Draft by the Detroit Lions.

Thanks to the coronavirus, and to his recovery from ankle surgery to repair a torn ligament, the team wasn’t able to get their hands on him until training camp opened up a little over a month ago, but head coach Mike Tomlin has liked what he’s seen so far.

“Just from a coach’s perspective that’s been in this league, it’s great to have a guy like him on your team as a guy who’s had to gameplan against him and work schematic matchups, particular in situational ball, possession downs, red zone”, he told SiriusXM Radio on Thursday with Pat Kirwan and Jim Miller.

“He’s been a challenge for everyone he’s faced on whatever team he’s been on over the course of his career, and that has proven to be true in a training camp-like setting. This guy’s made some exciting plays for us, particularly in those spaces”.

Ebron has been one of the deadliest players, not just tight ends, in the red zone in recent years, and the Steelers expect him to be a scoring threat for him in that area going forward. What little work they have been able to put him through in training camp in that regard has been encouraging.

Ebron himself said that he thinks the entire league is going to be sloppy in week one, but that might especially be so for players in new systems coming off of injuries—and playing with a quarterback who is also coming off of an injury. I just hope fans don’t immediately jump on him if he gets off to a slow start.