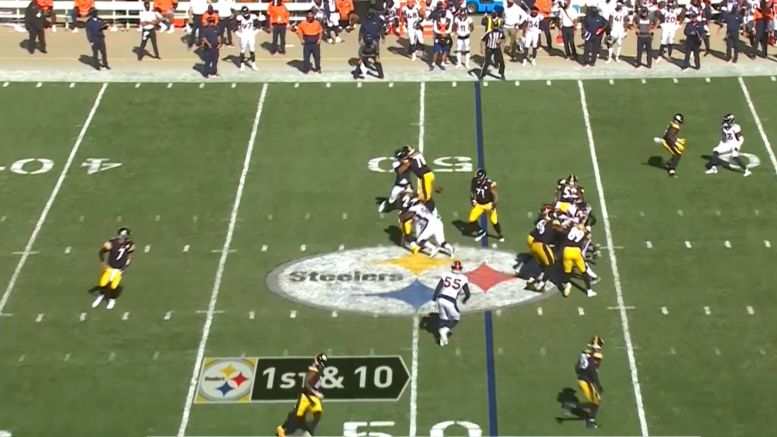 Benny Snell had everyone running around Pittsburgh shouting Snell Yeah a week ago. it’s a different story this Monday after the second-year back rushed for just five yards on three attempts, one of which he put on the ground and allowed to be recovered by the Denver Broncos defense—he also had one reception that lost four yards, giving him one yard from scrimmage on four touches.

It wasn’t the sort of encore performance that the Pittsburgh Steelers’ second-year back was looking to have, but all was not lost, by any means. James Conner, who missed most of the opener because of an ankle injury, was able to make it back in less than a week to rush for 106 yards on 16 carries, 59 of which served to ice the game on a career-long run late in the game. He also got into the end zone for the first time on the season.

With two fumbles in as many weeks, one has to wonder if Snell has a handle on the issue, or he has an issue with his handles, and that’s a question that Mike Tomlin will have to contemplate over the course of the next week as he gives consideration to the running back rotation heading into next week’s game against the Houston Texans.

When asked after yesterday’s game what his level of concern was regarding Snell’s ball security, he said, “I don’t know that I have a level. I know that I’ve got some concern, because we’ve got to maintain possession of the ball, particularly in those significant moments”.

And it was a significant moment, to be sure, an opportunity for the Steelers to turn the tide of the game and put it away. With 11 minutes to go, Ben Roethlisberger just put the Steelers ahead by 10 as a response drive to Denver closing in on them, making it 17-14 from 17-6. Then the defense forced a three-and-out, and they ended up with a safety when the punter muffed the handle.

Diontae Johnson, who caught the touchdown, did a nice job with the safety kick return, bringing it out 24 yards across midfield, but that was when Snell promptly fumbled on the next play, completely swinging the momentum and giving Denver a short field.

“He’s a young guy growing in terms of situational awareness and things like that”, Tomlin said regarding Snell’s need to understand that ball security is the top priority in those situations in particular. “I’m sure it’ll be a growth experience for him, but we’ve got some work to do there”.

It’s been something like a season and a half since the Steelers last had a game in which they didn’t turn the ball over. Earlier in the game, Johnson botched a handoff for an end-around, which was only saved because he was able to fall on it for an eight-yard loss. This pair of second-year players must respond proactively over the next week.