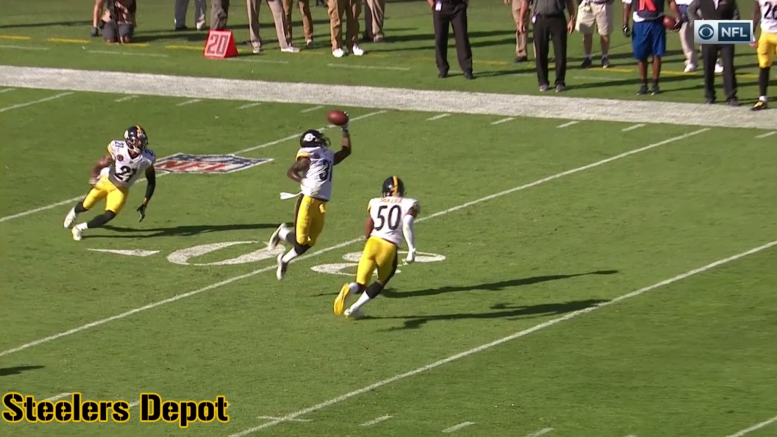 Whether they talk about it publicly or not, almost every player in the NFL probably sets goals for themselves for each season. For the Pittsburgh Steelers, T.J. Watt is famously a player who doesn’t talk about the individual goals that he has in mind. Minkah Fitzpatrick and Joe Haden were more open to letting out the number of interceptions they were looking to make this season.

Slot cornerback Mike Hilton was on with fans on Steelers Nation Unite yesterday, and he, too, was asked about his own goals for the season, specifically what he was looking for in terms of taking the ball away out of the air.

In his fourth season, he is looking to double his interception total, coming into the year with four over the past three years. “I’m aiming, because slot is a hard position to get interceptions, I’m gonna say around three”, he said. “I can do three or four. I feel like I had some opportunities to make three or four last year, so I feel good about this year and my chances to make those”.

Hilton intercepted two passes during his first season with the Steelers in 2017. Since then, he has picked off a pass each year. Last season, however, he also had 11 passes defensed, showing that he is getting closer and closer to the ball. He had 14 passes defensed combined in his previous two years.

Somewhat rare is the fact that he also has six and a half sacks out of the slot over the past three seasons, even if four of them did come in one season—three in the same game. He was asked by another fan which he finds more satisfying: the sack, or the interception.

“Just being a DB, it’s getting our hands on that ball”, he said. “That’s what everybody wants to see us do, and when you’ve got a chance to make a play and get an interception, it’s a great opportunity. I know a lot of people want to see some defensive players with the ball in their hands in space, so I would say getting that interception’s the thing”.

The Steelers as a defense had the second-most interceptions in the league last season with 20, half of them coming from Haden and Fitzpatrick, though one also actually came on special teams from, of all people, Trey Edmunds.

The defense did a much better job last season of taking the ball away, after leading the league in 2018 in potential interceptions dropped. They were more successful in capitalizing on their opportunities in 2019, and that is what the comments of their three top cornerbacks reflect in talking about their interception goals, taking their totals from last year and adding in the ones they felt they should have had.