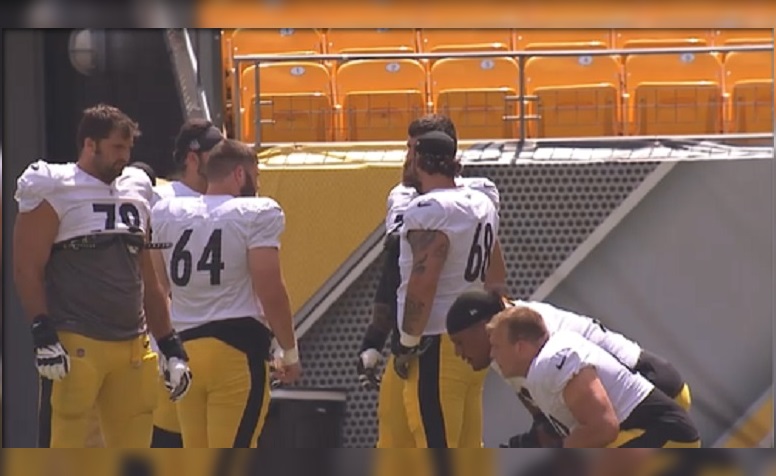 Cut down day is coming so here is my final crack at the initial 53 man roster after the cuts and prior to any players picked up before cuts.

Analysis: No change here for me. I personally never had any confidence in Paxton Lynch making a push here despite what the Steelers staff was saying in previous months. A healthy Roethlisberger makes this offense formidable so here’s hoping the backups stick to clipboard duty.

Analysis: If they don’t plan on resigning Conner they will use him all they can.  I think the majority of the passing game will go through Conner with McFarland getting some opportunities. I like Snell as the number 2; he can carry the load if needed.  McFarland will have his package of plays and a chance as a returner.  Edmunds is #53 for me and I keep him because he is a better special teamer than Jaylen Samuels.

Analysis: Watt replaces Roosevelt Nix as the team’s fullback and will be a key special team player.

Analysis: The entire group is young and the top three are poised to do big things this year. I wouldn’t be shocked if JuJu, Washington or Johnson hits the 1,000 yard mark.  Claypool brings size and speed to the position, will be a red zone target and was a fantastic special team player in college. Switzer is coming off and injury but showed good things in the second half of 2018. Cain took over the Johnny Holton role late in the year and was able to produce in limited opportunities but without special teams experience will likely be the odd man out on game day.

Analysis: This group looks to be set and if they all are active on game day it will give the team more options to use 2 and 3 tight end sets like they did in 2018.

Analysis: Big Al is locked in on the left side and I get the feeling that Okorafor will be the right tackle. Banner will be the swing tackle and will likely continue being used as a blocking tight end when needed.  I’d expect the team to keep their eyes open for a veteran tackle after cuts are made for the practice squad.

Analysis: Feiler, Pouncey and DeCastro will be your starters.  Wisniewski is the cagey veteran who will be able to play any of the three inside spots.  I think the team thinks very highly of Dotson as do I and he’ll likely be in a watch and learn role this year.

Analysis: Heyward and Tuitt are about as good a pairing as you’ll find in the NFL.  Wormley I see as a defensive tackle (1T, 3T) that can spell the starters or even take snaps at the nose.  I’m looking for Buggs to improve on his solid rookie year that can back up the starters.

Analysis: You have to love veterans like Alualu. Entering his eleventh season and willing to take on a new position.  I think they may use the nose tackle even less than previous years but Alualu can handle it.  McCullers showed improvement over the last couple seasons despite it not showing up in the stats. He’ll get 100-120 snaps.

Analysis: Watt and Dupree rarely come off the field. Adeniyi will start the season as the number 3 but Highsmith is going to push him. The backups need to start applying pressure to the QB when given the chance. The final spot in this group is between Skipper and Jayrone Elliott and it could be either. It will come down to who can play special teams.

Analysis:  These four are locked in. Interested to see how the ILB’s are used on passing downs but I have confidence in them.  Gilbert and Spillane will make their biggest impact on special teams but the former may see some sub package defensive snaps this year. This is another position they may grab a free agent from for the practice squad.

Analysis: The top three are one of the best groups in the league. Sutton has improved each season and has value inside, outside and backing up at safety.  Not a lot of chatter about Layne this preseason which could be good or could be bad.  Pierre has made some noise and may have earned himself a roster spot at least initially.

Analysis: Dangerfield is another guy who excels on special teams and can back up the strong safety position. Riley was brought in a couple weeks ago and can back up either of the safety spots.

Analysis: Big bounce back from Boz last year becoming better than before.

Analysis: Expecting the Berry from the earlier part of 2019 when he was actually having a pretty good season.

Analysis: They had to bring in Liam McCullough recently with Canaday a little banged up but if healthy, it’s Canaday.

Practice Squad Analysis: With the Covid situation I’d expect a player on the practice squad for each position group. Lynch was the only other QB in camp so he gets the nod.  At RB Whyte has potential and Smallwood can run, receive and return if needed.  McCloud could be a good returner if he can learn to hold on to the rock.  Rader is a solid blocker and doesn’t have much competition here.  On the OL I’m keeping a center, guard and tackle.

On the defensive line Mondeaux and Walker have pro experience. Elliott could push Skipper and the Steelers are familiar with him.  I expect an ILB to be signed after cuts.  Bandy will be groomed as a potential slot corner replacement for 2021. Allen is trying to add to his flexibility playing ILB but I think there is more hope there than realistic potential.  It’s been quiet regarding Brooks but he’ll be another they look to groom for the future.