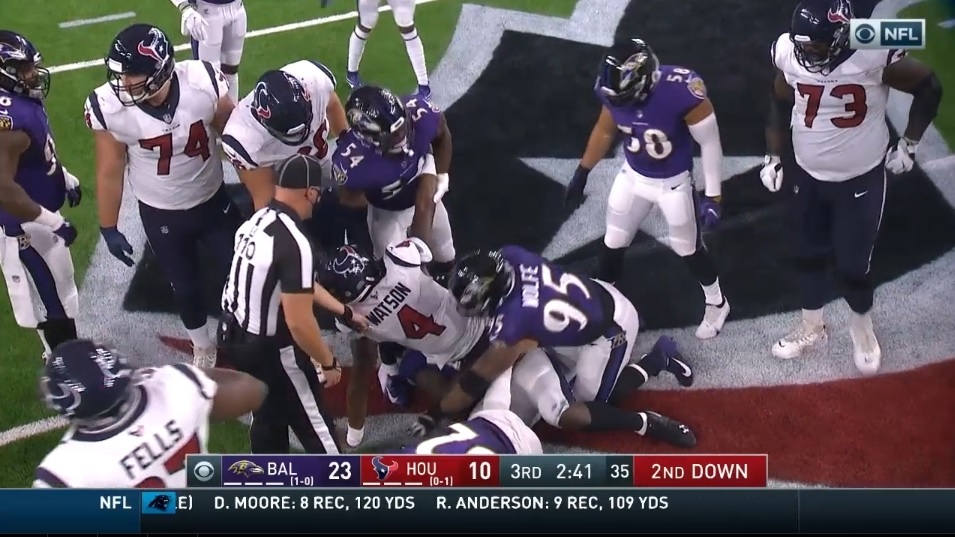 The matchup to watch last week for the Steelers was their receivers making guys miss underneath against the deep zones played by the Broncos defense. They were up to the task, specifically JuJu Smith-Schuster and Diontae Johnson. The latter made almost the whole Broncos defense miss on a single play. That will need to be a common theme for Pittsburgh’s offense to extend drives this season. It helped the Steelers move to 2-0 for the first time since 2017. Now they try to improve to 3-0 for the first time in a decade against the 0-2 Houston Texans. It’s easy to see their record and assume they’re not a good team. However, they might have played the top 2 teams in the AFC in back to back weeks in the Chiefs and Ravens. I don’t expect them to be a slouch by any means as they travel to Pittsburgh Sunday.

There’s going to be a ton of talk about the 3rd and most distinguished Watt brother, JJ, coming to play his brothers, TJ and Derek, this Sunday. And JJ Watt certainly will be one to watch as the Texans move him all across their defensive line. But the real difference-maker in this game is going to be the Texans newly-extended quarterback, Deshaun Watson. He’s one of the most fun young superstars to watch in the NFL with his ability to move around the pocket and make throws on the run. We’re going to breakdown what he does well and what the Steelers need to do in order to hinder his playmaking ability.

Even after trading Watson’s top target, DeAndre Hopkins, this offseason the Texans still bolster a solid receiving core with the likes of Brandon Cooks, Will Fuller, Randall Cobb, and Kenny Stills. Watson loves to spread it out with 5 of his receivers reeling in 5 or more catches through 2 games. With heavy usage of the RPO’s (run-pass-options), in this offense, a good majority of Watsons’ throws will be short and quick. The problems start to show for this team once they try to throw it down the field. If you sit down and watch the Texans, if Watson isn’t throwing a quick slant on an RPO or a quick sit route to tight end, Jordan Akins, across the middle it feels like he’s constantly running for his life.

According to Pro Football Focus, Houston leads the NFL in the most pressures allowed through Week 2 with 57. Accompanied by those 57 pressures are 20 QB hits and another league-leading 8 sacks on Watson. It’s important to note that not all pressures are solely on the Texans offensive line as the mobile QB loves to extend plays with his legs outside the pocket, but he can certainly get himself into some trouble by holding on the ball for too long.

Now, the Texans head to Pittsburgh where It’s been well documented this week about the Steelers’ blitz rate through 2 games. It currently stands at 57.8% which many are saying is a non-sustainable number. Per Next Gen Stats, Pittsburgh is getting a pressure 51.9% of the time when blitzing and 36.8% on non-blitzes, both league highs.

If you haven’t gotten the point yet, you have a team’s biggest weakness going against a team’s biggest strength. On paper, this is an awful matchup for the Texans. However, what the stats don’t show you are Watson’s ability to improvise and make great throws out of the pocket and under duress. That’s where this becomes the matchup to watch. None of this is new to Watson as he’s been under siege almost his entire career. In 2018, he endured a league-high 62 sacks and the Texans followed that up with 44 sacks allowed on Watson in 2019. All that said, the Watson still went 21-10 as a starter, winning the AFC South in back-to-back years while throwing  52 touchdowns to his 21 interceptions. So while reading into Houston’s pressure stats this early into the season, you have to assume Watson is taking an “ain’t s*** changed” approach.

With all of those hits and sacks and he’s never missed a game for the Texans in the last 2 years other than the 2019 season finale against the Titans where the division title was already locked up. There’s no question he’s one tough dude. Not one that will crumble after you hit him in the mouth 1,2, or 10 times.

In 2019, Watson was 2nd to only Patrick Mahomes with 10 touchdown throws out of the pocket. Below, is a great example from last week against the Ravens of how he can extend plays with his legs. He steps up into the pocket well, then stiff-arms the defender before scrambling out of the pocket. He’s always keeping his eyes downfield and delivers a bullet to his receiver for the first down. Peak Watson.

This may have been the best throw that no one is talking about from last week. Again, Watson is under duress, casually side steps to his right and delivers a dime to Brandon Cooks on the deep over route. The end zone view really gives you an outstanding angle of how ridiculous a throw this is.

The other thing Watson can do is extend drives with his legs. Here he is against the Chiefs in Week 1. He ends up with his guard and center in his lap from bull rushes and bounces the play outside. With the Chiefs EDGE performing a stunt inside that leaves no contain on the left and Watson easily gets past the sticks before trotting out of bounds.

Plays like the one above are ones that need to be taken into account come Sunday or the defense is going to see some long drives again this week. While not as athletic as Watson we saw Daniel Jones outrun the Steelers defense a few times for first downs in week 1 to extend their 19-play drive.

I went back to watch the Ravens game from week 5 of last year to see if the Steelers did anything special in terms of spying Lamar Jackson. It was a pretty clear no. Their solution was making him have to throw the ball downfield. When he was asked to do that, he struggled, throwing 3 interceptions and taking 5 sacks. The 5 sacks are shown below and you can see almost all of them are coverage sacks where the D-Line is extremely disciplined in their gaps and are careful to not leave him anywhere to go. The pass rush was relentless. No matter where Jackson turned there was another rusher ready to pounce. This is going to have to be similar against the Texans where the Steelers collapse the pocket around Watson, not allowing him to escape and make big plays.

It’s not to say Watson can’t get out-schemed either. Here’s a sack from the Ravens games where the Ravens simply bring 6 against an empty set. Watson doesn’t appear to even look to throw hot and gets sacked by the blitzing safety off the edge.

It’s no secret that Watson is going to be the best QB the Steelers have seen so far this year with his ability to scramble and make throws under pressure. He’s going to provide a great test for how good this defense really is. Backup-QB Jeff Driksel started to poke some holes in the pass defense last Sunday, so it’s going be very interesting to see how this defense reacts to a guy like Watson. If he can extend some drives with some 3rd down scrambles and turn missed sacks into big plays, I very much expect this game to come down to the defense having to make a play on the last drive just like Denver.