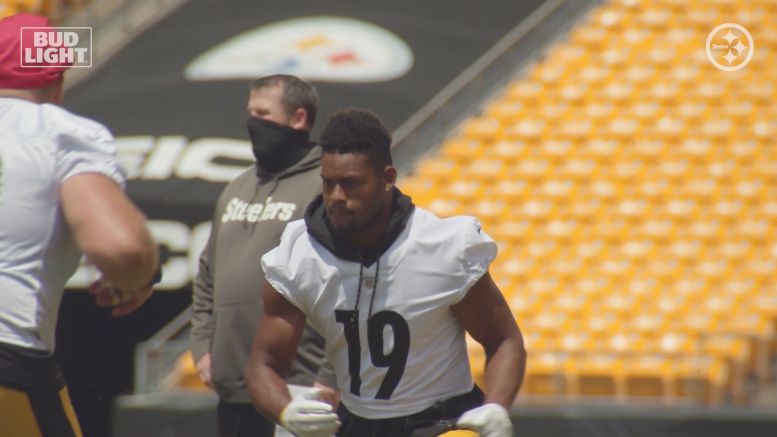 So much about the 2020 season for the Pittsburgh Steelers rests on the elbow of Ben Roethlisberger. But he also has to have a number one target to throw to. Last year, that was supposed to be JuJu Smith-Schuster, just a year after he went off for 111 catches and 1426 yards, both leading the team, with seven scores.

Suffice it to say that he fell far short of those numbers in 2019, but he also barely played with Roethlisberger because the quarterback went on injured reserve after the second game of the year. the receiver had injuries of his own. But no matter what excuses there are, the bottom line is that he enters the final year of his rookie contract with a lot of questions to answer.

That’s what Kevin Colbert acknowledged yesterday while appearing on The Fan Morning Show with Colin Dunlap and Chris Mack. He was asked about whether or not the bar was set too high for Smith-Schuster by Antonio Brown in terms of realistic expectations.

“When JuJu had his most recent great season, when he was healthy, we did have Antonio Brown”, Colbert said,. so, to minus Antonio from that equation would be erroneous to us quite honestly, and JuJu understands that”.

“JuJu wants to be, and he is our number one receiver, but he wants to separate himself and make that for himself”, he went on. “And I know that he wants to prove who he is independent of anybody else, but he also wants to win. JuJu’s a very driven young man. He had a great offseason so far in camp. He’s been very impressive, and I know we we’re real anxious to get that group back out there together”.

At this time last year, the Steelers were counting on free agent Donte Moncrief to step in and take over the number two receiver role. That lasted about five quarters before he was benched for most of the rest of the year.

Meanwhile, James Washington was coming off of a disappointing rookie season, while Diontae Johnson was just getting his feet under him. He was the first to admit that he wasn’t supposed to play nearly as much as he did in 2019, and even as he became more and more important to the offense, they tried to find ways to limit his snaps.

Along with the maturation of these two  young receivers, and bringing in Eric Ebron and drafting Chase Claypool, this offense has a lot more weapons , more variety around Smith-Schuster than it did in 2019 in effect.

The conditions are better for the fourth-year receiver to maximize his skills, something that didn’t materialize last year, for a variety of reasons that, yes, includes issues with his own play. But that was last year. This is 2020, and he’s eager to prove that his Pro Bowl season wasn’t a fluke, or due to anybody else but himself.