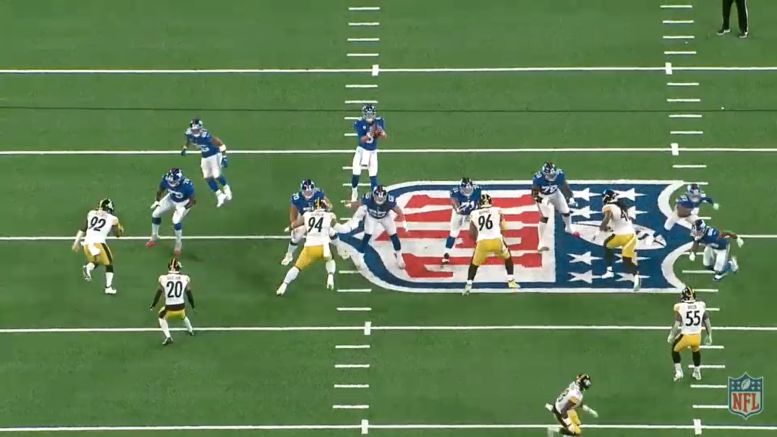 Isaiah Buggs was a healthy scratch for the first six games of his rookie season a year ago after making the 53-man roster as a former sixth-round draft pick, serving as the sixth defensive lineman, who very rarely dresses except in the case of injuries opening up opportunities.

The Pittsburgh Steelers must have felt good about the progress he has made since last season, however, since they have now installed him as one of their two game-day reserves, playing both tackle and end. He saw a career-high 17 snaps on Monday against the New York Giants, joining Tyson Alualu on one tackle in the game, a run stop against Saquon Barkley.

Said defensive coordinator Keith Butler via transcript about Buggs and his playing time, “I think we have to rest those interior guys a little bit every now and then”. He added that “Isaiah is trying to lose weight, keep his mobility [up]”.

“I think he’s strong for us or has been strong at the point for us. He just has to make sure he stays in the proper gap in some of the blocking schemes”, he added. “I think he is going to get better and better at that the more he plays”.

The departure of Javon Hargrave in free agency was part of the process of the door opening for Buggs, with Alualu moving to a nose tackle role, though he also features at end in the 3-4 front. In fact, all of the linemen who dress are end-capable in the traditional front, but they are relying on Buggs’ ability to play at all spots.

“We need him”, Butler said. “We have some good interior linemen. We have three good ones that I think anybody in the NFL would love to have. We have to give them some backup and give them some rest sometime. Isaiah’s got to fill that hole for us”.

The sixth lineman on the roster to make the team is rookie seventh-round pick Carlos Davis, perhaps the player on the roster we know the least about, because there has been no preseason. The only hint that we have that he had a good training camp was the fact that he made the team, and a reference by Butler several weeks ago to liking a few of their young defenders he didn’t want to name so as to draw attention to them.

The emergence of Buggs is admittedly something that I am excited about, as I believe he can develop into a valuable rotational play, especially now that he is showing the level of versatility that allows him to play both nose tackle and end. His ability to provide something of a pass rush from thee reserve is something the Steelers have lacked for a while now.