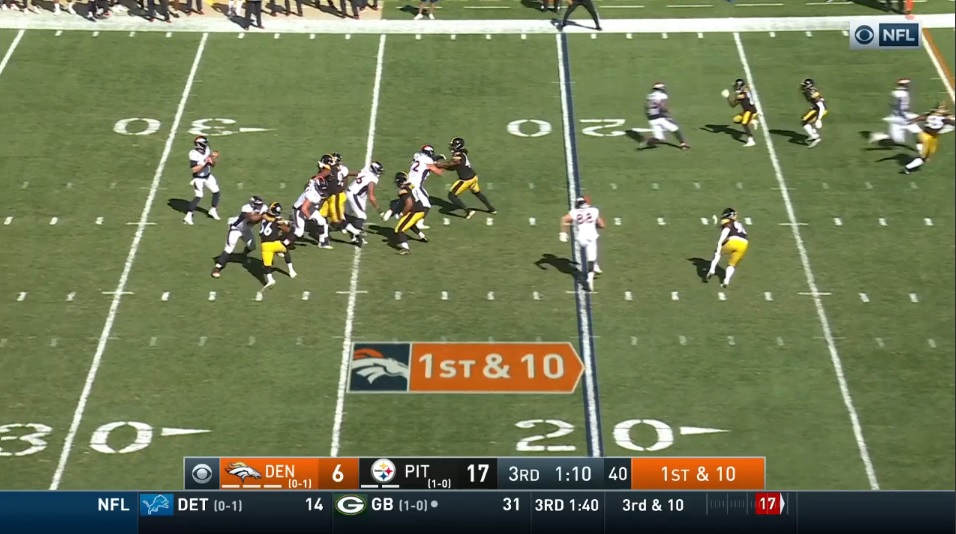 Earlier this week, we broke down what we believed went wrong on Noah Fant’s 20 yard touchdown. Now defensive coordinator Keith Butler has weighed in. Though he isn’t getting into specifics about whose fault the play is.

Speaking to reporters Wednesday, Butler was asked his assessment of the play.

“We screwed it up,” Butler told reporters via a team transcript. “I’m not going to tell you what we did and what we didn’t do because I don’t want to tell them what we did or didn’t do to be honest with you. We messed it up. We dropped a coverage. We didn’t go. We had somebody who was supposed to blitz, and they didn’t blitz. I’m not going to name them.”

Here’s another look at the play.

Considering how much he’s done it through two games, it sounds like Mike Hilton was expected to blitz on this play. Terrell Edmunds of course had the fourth down sack but Hilton’s been sent a whopping 23 times the first two weeks. So while it’s not known and Butler certainly isn’t divulging information, it’s reasonable to believe Hilton was supposed to blitz off the edge.

Regardless of who was supposed to blitz, it doesn’t seem to make life any easier for Devin Bush. Assuming one of Edmunds or Hilton were supposed to rush, Bush is still one-on-one with Fant. Bush’s inside leverage makes it difficult to play the out-breaking corner route.

Of course, if the blitz gets home, Jeff Driskel wouldn’t have had a clean pocket to make an on-target throw. Denver ran the same concept in the fourth quarter, a 22 yard juggling catch by Fant, with Bush again one-on-one. This example is the Steelers out of base defense, not nickel like the above example, with a five man rush.

Butler opted not to call out the player who screwed up on the play.

“My guys do a good job. They hustle for us. They play hard for us, and stuff like that. I’m not going to be critical of them, publicly. When we get in our room and make corrections and stuff like that, then I’ll do it then. Publicly, I don’t particularly like to tell who did this and who did that so the blame can go to them. There was blame to go to somebody there. We just didn’t run the blitz. We didn’t execute like we should have.”

An expected answer but the right thing to do in avoiding throwing anyone under the bus. The Steelers’ defense had multiple coverage busts and mistakes against the Broncos, some that were costly, some that weren’t, and that’ll need to be cleaned up for Sunday’s game against the Houston Texans. With the speed they have at receiver, led by Will Fuller and Brandin Cooks, one mistake could result in a long touchdown.