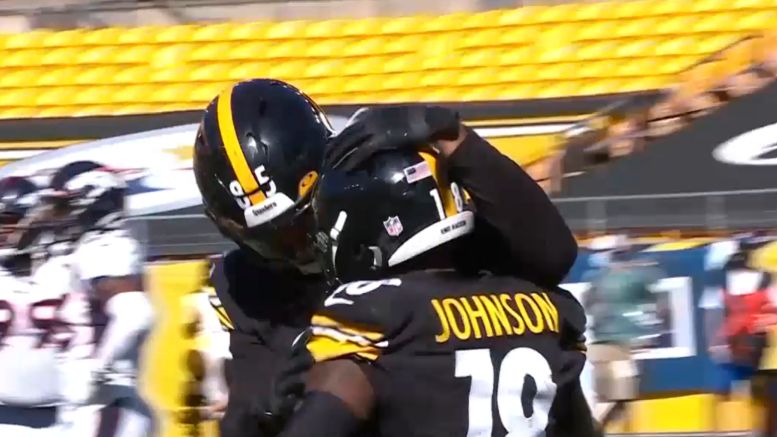 The Pittsburgh Steelers don’t have a 100-yard receiver yet in 2020, though they do have two 100-yard rushers, and three wide receivers with over 100 yards for the season. Four different wide receivers have also gotten into the end zone already.

Still, at the top, you have two wide receivers with 13 and 14 receptions, and then nobody else with more than five. JuJu Smith-Schuster and Diontae Johnson combine for 37 targets so far this year (Johnson alone has 23), while nobody else has more than eight so far.

With so many skill position players who are ready and able to contribute to the passing game, how do you keep everybody happy with their role and distribute the ball? The running backs and the tight ends so far, for example, haven’t gotten significantly involved.

“It’s not about keeping happy. It’s about winning games. If you win games, it goes a long way. If you win the Super Bowl, everyone gets paid”, Smith-Schuster told reporters earlier today. “Like with the Chiefs, everyone’s getting paid. At the end of the day, we know we all support each other, we’re all brothers”.

Though he is one of those players who gets a larger share of the opportunities, Smith-Schuster is also one of those on the team who does the most to foster camaraderie, including with his celebrations. He acted like a fan after Johnson’s touchdown on Sunday, for example.

“Like Ben said, stay calm, stay patient, and when it comes your way, make a play”, he said of the message conveyed by Roethlisberger—probably a message better received without Antonio Brown in earshot. “And that’s what we do. Everyone’s making a play. Diontae scored, Chase scored, I scored, James scored. Everyone’s touching the ball, so it is what it is. We just want to win games and be happy and get out of the stadium”.

The Steelers have plenty of talent at every skill position on offense, with the right quarterback, and an offensive line that through two games has looked up to the task, even with moving parts. The offense has to do better on critical downs than it did Sunday, but that figures to be the aberration rather than the norm.

And the ones making plays will no doubt change from week to week. Smith-Schuster and Johnson don’t need to put up big numbers every game when you have somebody like Eric Ebron or James Washington or James Conner capable of going off. Meanwhile, Chase Claypool is just getting started. It’s not about putting up huge numbers. It’s about contributing to a championship-quality team and to wins.