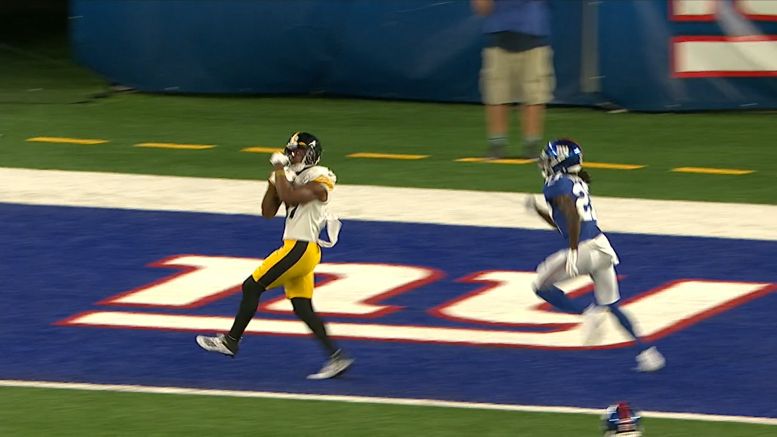 JuJu Smith-Schuster sat out of yesterday’s practice while nursing a knee injury. In fact, he was one of a number of players listed on the injury report for the Pittsburgh Steelers—but that is not uncommon for Wednesday practices following a Monday night game. The short week leads teams to be more cautious about their players’ bodies. And, of course, they have had a shorter time to heal.

Of those listed on the injury report, I’m not concerned about any of the players who were not already known to be injured—James Conner, David DeCastro, and Stefen Wisniewski. The rest will likely practice today, or at least tomorrow, and then play on Sunday.

That will surely be the case for JuJu Smith-Schuster, who is coming off a satisfying 2020 debut in the team’s win against the New York Giants earlier this week. While he was only targeted six times during the game, he caught all six of those targets for 69 yards, and two of them were in the end zone. It was his third-career multi-touchdown game, and his second with multiple receiving touchdowns.

Though he wasn’t necessarily a high-volume target to start the season, his connection with quarterback Ben Roethlisberger was clear, obvious, and critical to the end result of the game, and not just thanks to the two times they hooked up for six. And that is also one of the reasons he came into this season more motivated.

“For myself, having the first two years I had good seasons, being able to play with Ben”, he told reporters yesterday, according to Teresa Varley. “Coming into this season I had a chip on my shoulder saying that I have to come out here and prove myself. It was great to have everybody out there, everybody be able to play ball again”.

The numbers speak for themselves. Through his first two season, he recorded 169 receptions for 2343 yards and 14 touchdowns. While he missed four games due to a knee injury in 2019, he still finished the year with just 42 receptions for 552 yards and three scores.

A lot of that had to do with Roethlisberger missing most of the season after tearing tendons in his throwing elbow, combined with his own injuries and issues. The end result was a miserable disappointment of the season and really just not very fun.

Smith-Schuster was also subject to a good deal of fan criticism during his injury in particular. His fun-loving attitude didn’t seem to sit well with fans who were watching the offense struggle and the team start to lose games while he was sitting at home nursing his knee injury and promoting his brand on social media.

The best way to silence critics as an athlete is to play well on the field. So far, so good on that front in 2020. But he may not want to lose that chip, either.