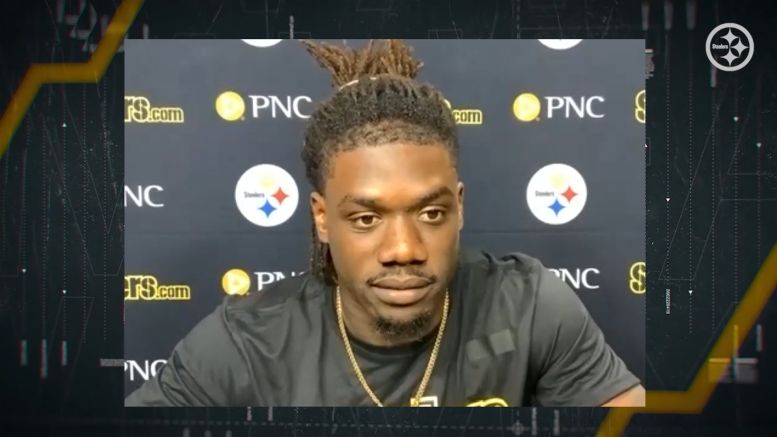 Being a rookie in and of itself is a wild ride. Going undrafted through the process adds another layer still. Throw on top of it actually making the roster—and through a pandemic for the sprinkles—and you have the story to date of James Pierre, the lone college free agent to make the Pittsburgh Steelers’ 53-man roster.

Coming out of Florida Atlantic, he was fortunate to have been signed after the draft. Many players in a position similar to him went unsigned, and this year, teams were not even able to give those players the opportunity to try out for a roster spot during rookie minicamp.

Being an undrafted free agent is an uphill sprint that last months and is almost singularly focused on just one thing, something that may seem out of reach and unrealistic: making the team. But now that Pierre has made the team—assuming that he is still on the roster come Monday night, the shift changes abruptly, and jarringly.

“Today was like, ‘I’ve got to get ready for a game’”, he told reporters earlier in the week when speaking about the feeling of coming into the UPMC Rooney Sports Complex the day after learning he had made the 53-man roster. “It’s not like I’m coming out to practice anymore”.

“I’ve really got to get ready for a game, see what I’ve got to do, attack the week. Just watch the older guys, lean in”, he added. “Like Coach Tomlin said, lean in, watch what the older guys do, how they go within a game week. So I’ve just got to keep taking notes from them”.

At 6’2”, Pierre has a natural physical trait that is appealing, and something that the Steelers will want to try to nurture and develop over time. With that said, it is not hard to imagine that his is probably one of the lowest spots on the depth chart, meaning that he would likely be one of the first players released if changes were to be made to the roster.

Other than that, there likely won’t be much in the way of expectations for him in year one. For starters, he is sixth on the depth chart at his position, behind Joe Haden, Steven Nelson, Mike Hilton, Cameron Sutton, and Justin Layne. It would take at least two injuries before he would even be likely to be considered for playing time.

But he still has to know what it’s like to go through a season. Learning how to be a professional and how to plan for games is every bit as important as doing all of the physical work on the practice field. And leaning upon the veteran experience of others is something that he has been more than willing to do.