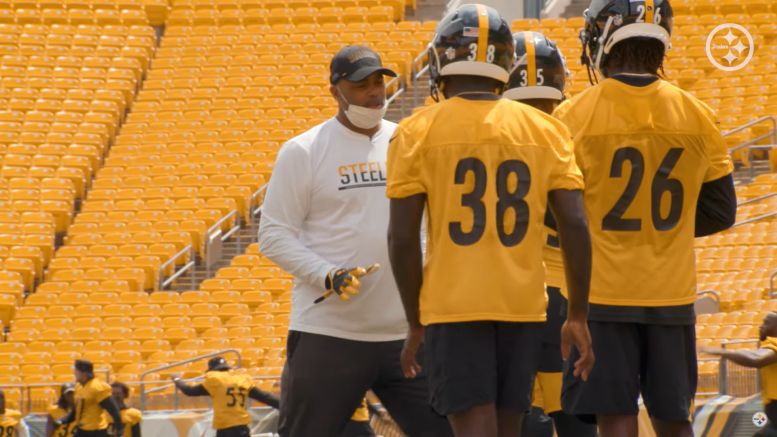 Jersey number changes are a part of roster turnover every year when we move from the offseason to the regular season. Most of the time, they’re necessary changes when offensive and defensive players who had been wearing the same number both make the team. Sometimes players opt to take a new number they prefer when it becomes available.

The Pittsburgh Steelers have a number of players changing their numbers from training camp, according to the updates on the roster from their website, including a couple of undrafted rookie defensive backs, so we’ll run them down for you.

Rookie college free agent cornerbacks James Pierre, who made the 53-man roster, and Trajan Bandy, who is on the practice squad, both changed numbers. Pierre, who is listed as a DB, switched from 26 to 42. Rookie fourth-round running back Anthony McFarland has 26. Bandy switched from 38 to 40, as third-year running back Jaylen Samuels has 38.

Another number change on the practice squad was for first-year offensive tackle Jarron Jones, who was wearing Javon Hargrave’s 79 in training camp. He has now taken 74, a number that was worn by Christian DiLauro in training camp. The converted defensive lineman wore number 94 at Notre Dame, and offensive linemen cannot wear numbers in the 90s.

Veteran running back Wendell Smallwood and safety Curtis Riley, both on the practice squad, also both changed their jersey numbers. Smallwood was wearing 21, and Riley 33. They changed to 29 and 35, respectively. 35 is the number Riley previously wore. Smallwood previously wore 28 with the Philadelphia Eagles, but that belongs to Mike Hilton.

Sean Davis, returning to the team, retook number 21, which he previously wore last season in honor of Sean Taylor. Safety John Battle also wore 21. 33 belongs to Trey Edmunds, who begins the third consecutive season on the Steelers’ practice squad. In the previous two seasons, he eventually ended up on the 53-man roster. Alexander Myres was wearing 35 at the time that Riley was signed.

As mentioned, with Davis returning, he reclaimed his number 21 jersey. Joshua Dobbs also returned to his number 5 jersey, which had been worn by Paxton Lynch in training camp. Dustin Colquitt, who wore number 2 throughout his career, took over Jordan Berry’s number 4 jersey. Mason Rudolph has held the number 2 jersey since 2018.

So to quickly recap: