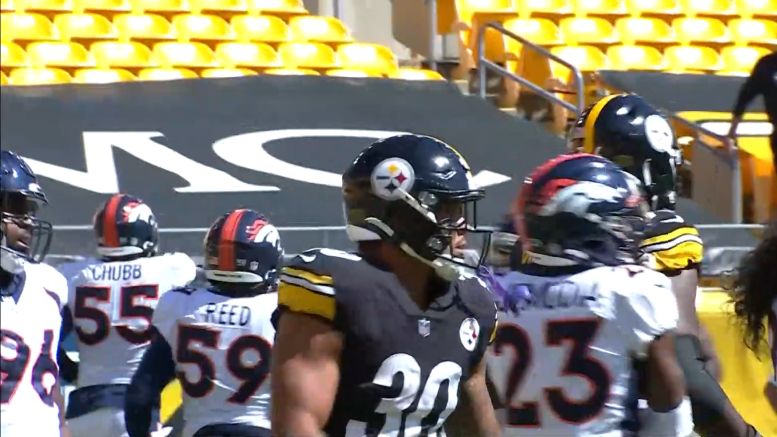 One thing that readily became apparent early in Sunday’s game was that Benny Snell’s 2020 debut did not alter the Pittsburgh Steelers’ plans in the backfield. Even with the second-year man rushing for over 100 yards while James Conner struggled, and then left with an ankle injury, it was the latter on the field for the early snaps of the game, including an impressive 11-yard run to put the offense on the 20..

While it took a third-down conversion by JuJu Smith-Schuster, who had been running well after the catch on short passes, Conner also got the opportunity to finish at the goal line, punching the ball in on first and goal from the two-yard line.

While Benny Snell and Jaylen Samuels did get some touches, Conner as the lead back persisted as a theme throughout the game. Toward the end of the first half, for example, he was again featured at the goal line, getting multiple touches, though the Broncos defense was able to get a stop on third and short, and Mike Tomlin elected to attempt the field goal instead.

Snell didn’t go himself any favors for future snaps after he fumbled late in the game, either, his second fumble in as many weeks. Last week, he had Smith-Schuster stalking the play and ready to pounce on the ball. Not so today, and the Steelers lost the ball immediately after getting a safety and Diontae Johnson getting a solid return to midfield.

Samuels didn’t look as though he was doing himself any favors early, dropping a pass, but later in the second half he was able to field a screen pass thrown behind him on third and three and converted. Both he and Snell got some touches, but Conner remained the lead back, even if it was a grind at times.

Ball security is key for any featured back, and three fumbles in Snell’s early career don’t help. That’s one of the reasons Tomlin continued to trust that Conner would be his guy, and he showed that that faith was merited with his ability to close out the game.

That included a career-long 59-yard run just after the defense forced a turnover on downs, which put him over 100 rushing yards for the game. That’s the second week in a row in which the Steelers had a 100-yard runner now, and Conner’s first since he injured his shoulder in Week Eight against the Miami Dolphins last year.

Conner finished the game with 106 rushing yards on 16 carries and his first touchdown of the season after missing most of the first game with an ankle injury, adding two receptions for 15 yards as well. It was a strong performance overall considering the fact that he was injured just six games ago.