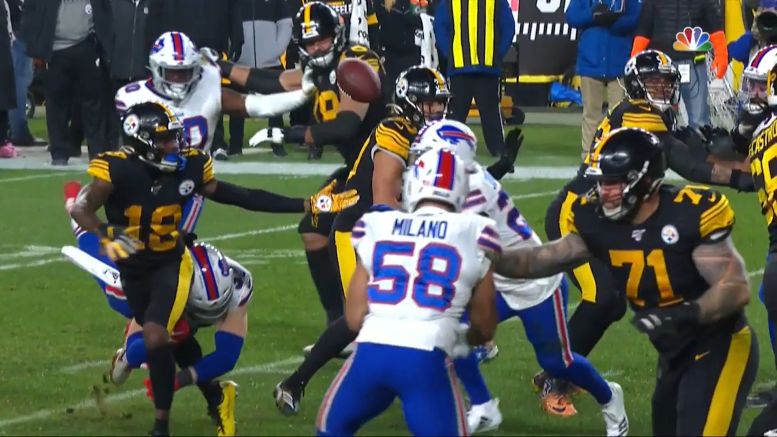 Coming into the 2019 season as a 3rd round pick out of Toledo, Pittsburgh Steelers wide receiver Diontae Johnson was relatively unknown to the casual fan. This means low expectations and the ability to “sneak up” on teams as quarterback Ben Roethlisberger alluded to last week. After Johnson’s impressive rookie season that saw him lead not only the Steelers, but also all rookie receivers in receptions, he’ll be awarded no such luxury in 2020. Diving into his game there’s so much to be excited about from his quick releases and big-play ability to his elite separation at the top of his routes. Johnson has all the tools to be a #1 receiver in the NFL.

It just made me wonder, after watching a full season, what is that one part of his game that is truly lacking? He didn’t have many glaring weaknesses. To state the obvious, it was clear he didn’t have a true starting-caliber QB throwing to him last year. Roethlisberger’s back – check. It was often mentioned that he should fill out his frame to be more physical. In turn, he showed up to camp at 191.3 lbs after weighing 183 last season – check. So, what does that leave us? Ball security.

Johnson led the Steelers in fumbles last year with 5 (T-5 in the NFL). You’d have to go all the way back to 2006 for the last time Pittsburgh had a non-QB fumble 5 or more times in a season when Willie Parker coughed it up 7 times. I’ll be the first to go on record saying I think at least 2 of Johnson’s fumbles are a little unfair.

The first is his fumble out of bounds against the Baltimore Ravens in Week 5. The cornerback made a good play and rakes through Johnson’s hands simultaneously with his tuck. The play was actually reviewed and easily could have been called incomplete, but they stuck with the original call on the field as a catch and fumble.

The second being Johnson’s first fumble in the Buffalo game. It’s hard to place the blame on Johnson here as you have a bad snap combined with a mesh from James Conner who just returned from an injury that had him sidelined for the better part of 7 weeks, which makes you question the practice reps these two were able to get on this play. When you have two guys playing out of position, running a zone read, it’s very possible for things to get messy. Johnson gets hit before he can corral the handoff and you have another fumble.

If those were his only 2 fumbles of the season it would be very easy to look past as they were sort of “freak plays” if you will and not something to be entirely worried about. However… there are 3 more for us to look into.

We’ll start with the root of the problem as Johnson likes to carry the ball low and away from his frame. Then, when he anticipates contact he covers up and protects the ball as seen below.

This is all fine until he doesn’t see a defender coming. His second fumble in the Bills game is a great example of this. It’s a shame because it comes on one of the most impressive plays from his rookie year. He toasts one of the league’s best cover corners, Tredavious White, off the line with a patient release and hand usage. He’s able to make the first guy miss before giving White a nasty stiff arm. The problem is the Bills, Matt Milano, is lining up a sucker punch on the ball. If you pause the GIF at the 8.25 mark you can see Johnson is carrying the ball well away from his body because he’s not expecting contact and gets it knocked free.

Too often you when you see Johnson catch the ball and start to set up a move, he naturally goes into a position similar to the below screenshot. 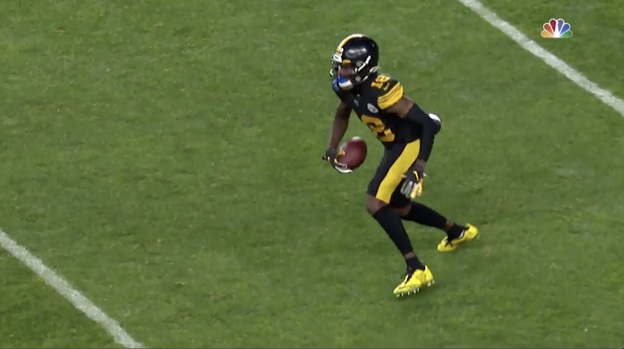 If you know anything about ball security there’s supposed to be 5 points of pressure on the ball:

Here we can grade Johnson at about a 2 out of 5. Now the above picture is an exaggeration that I could pull from his tape but it’s often no more than 3 when he’s making his moves which we can see is causing problems for him. It really got to the point last year that you were clutching the arms of your chair while he was running in the open, worried that he was going to fumble once he got hit.

Johnson’s last 2 fumbles to go over are actually eerily similar. In both, Johnson initially jars the ball loose himself either with his knee or with the ground due to not having the ball high and tight. Then almost immediately after the bobbles, he gets a punch square on the ball from a defender. He likes to sort of chicken wing the ball perpendicular to his chest when he goes into contact rather than holding it vertically tight to his chest which is a much stronger position. The technique costs him in both instances.

In comparison, watch how AB keeps the ball tight and square to this body the whole way through the run after the catch. There’s no way this ball is popping out at any point during play and our blood pressures are all much lower because of it.

Another thing I wanted to point out about DJ is he favors his right arm while carrying the ball. The general rule of thumb is to have the ball in your outside arm, closest to the sideline. Now, there are instances where this rule may be broken due to the defender being in between you and the sideline or you’re planning to cut back, etc. The point of this, other than your body creating the natural barrier between the defender and the ball, is it also allows you to have a “weapon” while carrying the football. The weapon being your opposite arm to keep the defender’s diving hands away with stiff arms. Below you can see numerous instances where Johnson either immediately puts the ball in his inside arm or he cuts back across the field without switching arms leaving him without a weapon as he meets the defense.

With a guy that already has trouble holding the ball loosely, this creates a double negative by increasing the ball’s exposure to the defense. Now, why is this so important you may ask? A prime example of this is the 2018 game at Denver where Xavier Grimble catches a wide-open pass and tries to truck the Broncos safety into the end zone. If he has the ball in his outside arm there’s almost no chance he fumbles as the ball is saved from most of the force of this big hit. Instead, it’s a touchback. And who knows what happens not only the rest of this game but the rest of the Steelers 2018 season if they score here. I’ll drop the clip below, but I’ll add a TRIGGER WARNING.

The good news is these are small, coachable elements that Johnson can add to his game. We saw how well he improved his punt return techniques the 2nd-half of 2019. And it’s truly these small aspects that turn a good player into a great player. These aren’t things that DJ hasn’t shown he can do, he has done them. All the clips below he tucks the ball in his outside arm and uses his weapon. Not only does he gain a few extra yards in doing so, but there’s also a slim chance of fumbling in any of these. You’d just like to see this on a more consistent basis as he continues to round out his game.

Here’s an example of how you can turn a good play into a great play. Obviously a fantastic catch from Johnson after Ben almost overthrows him on the drag route, but you immediately see him tuck the ball in his inside arm. This leaves him without the ability to stiff-arm. You can also see McCourty for the Pats try to punch that ball out because it’s there for the taking. Now compare that to AB’s play. He gets a better ball from Ben, but he instinctively put the ball in his outside arm and lays a violent stiff arm into Bradley Roby, giving him the space to get the first down.

Not going to make this an article about Antonio Brown but when you have Johnson, a receiver that is winning in similar ways as Brown was, it’s hard not to want him to start to implement some of the small things that AB did well. There are millions of clips AB granted us to now be able to use as teach tape. The below clip is a great one. You can get an idea about how AB was able to naturally feel where the defenders were and place the ball accordingly so he’d have his weapon available while keeping the ball safe. Watch as he catches the ball, he tucks it in his inside arm but only because he knows that the corner is in between him and the sidelines. As he turns up-field he starts to make the transition to his other arm as the safety is coming down, but he doesn’t fully commit to the outside tuck until he safely can feel the corner dive behind him. Then he uses his weapon and slides out of bounds, keeping the ball safe and sound.

Ball security is one of the few things in football that an individual can control. There will be times where mistakes happen and you may lose the football. But it’s all about risk management and damage control. If Johnson can start to implement and fix some of the elements I highlighted in the article I really can see him taking his game to the next level because the rest of the tools are already there. The fact that he is entering his second season and we are only what some may call “knit-picking” parts of his game is extremely exciting. The Steelers do have as Mike Tomlin so greatly put it, a “young gun in 18.” Let’s just hope in 2020 we are seeing that same big-play ability from Johnson without having to hold our breath that he’s going to fumble.