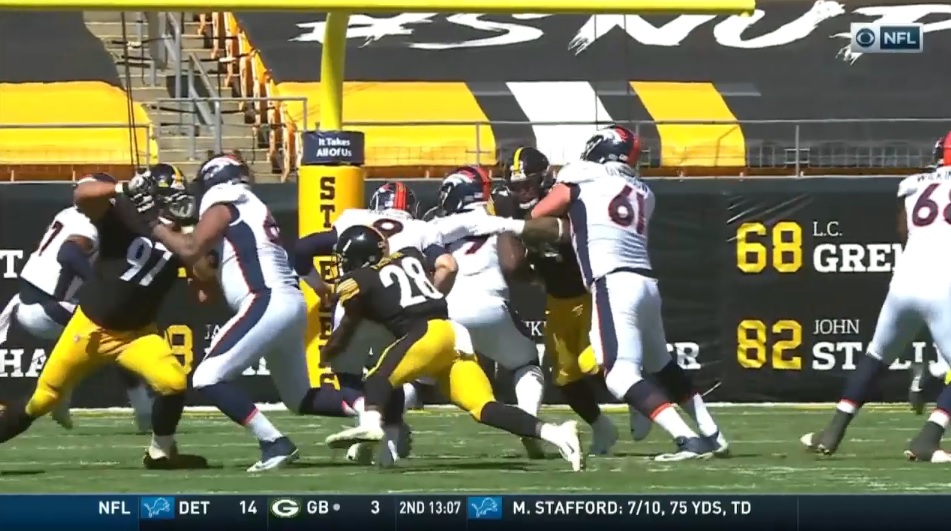 The Pittsburgh Steelers have led the NFL in sacks for three years running. They are currently in second place in 2020 through two games with 10 sacks, one behind the Washington Football Team, but they have been generating by far the highest rate of pressure in the NFL, led by a dominant front four in T.J. Watt, Bud Dupree, Cameron Heyward, and Stephon Tuitt, who have combined for five sacks and more than 50 pressures so far.

But it hasn’t come just from the front. Of their 10 sacks, four have come from off-ball players, including three in the secondary. Mike Hilton already has two. Terrell Edmunds had the game-sealing fourth-down sack on Sunday. Vince Williiams had one of the fastest sacks of the season back in week one. And they’re getting the pressures as well.

The Steelers have, in fact, been the most blitz-happy team in the NFL, with Next Gen Stats having them at a blitz rate of a mind-boggling 57.8 percent over the course of the first two games. Of course, that’s a small sample size, and the media is reading much more into it than the Steelers are.

Back in 2017, when the pass rush was still evolving into its current form, the Steelers still relied heavily on the blitz just to generate pressure, because the four-man front wasn’t getting the job done (Watt was a rookie, Tuitt was injured, and Dupree was still maturing—and probably injured as well, if memory serves).

At the time, Mike Tomlin stressed that while the pressure was good, the mark of a truly great pass rush is being able to win with four. That’s what they did a year later, but over the past season-plus, Keith Butler’s unit has been mixing in blitzes more frequently again—to great success.

The thing is, this is a team that can win both ways. They have a front four that can beat any offensive line in the league, but they are also skilled in how they deploy their blitzes and have the personnel, such as Williams and Hilton, able to execute it.

At the end of the day, if you can win both ways, it doesn’t matter how you get to the quarterback, as long as you get him on the ground. And showing both on tape will only make your pass-rush stronger by being more unpredictable. Imagine biting into a cake not knowing if it were chocolate or…whatever flavor you don’t happen to like.