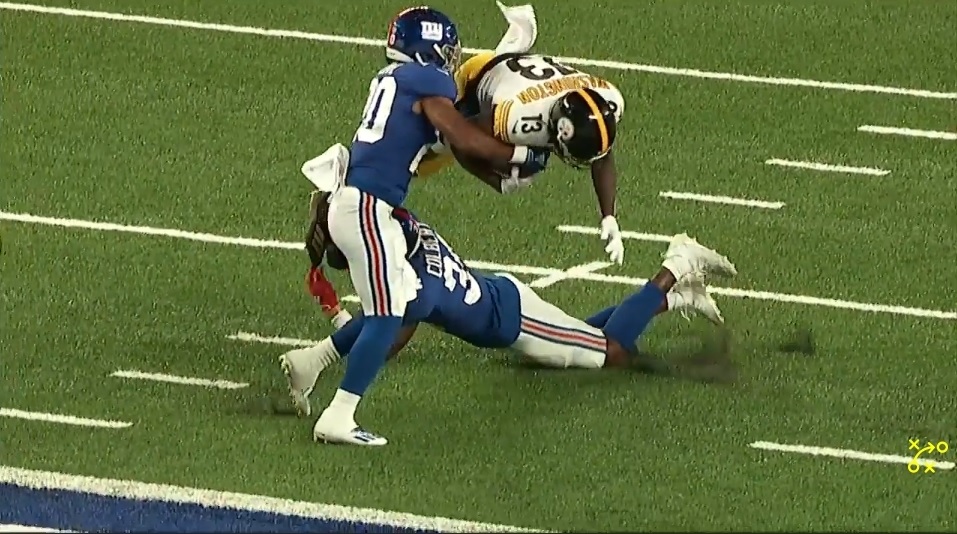 High expectations surrounded the Pittsburgh Steelers this offseason with the anticipated return of Ben Roethlisberger from an elbow injury that put his career in jeopardy. The offense possesses a bevy of weapons, and despite having to play three different quarterbacks last season, nearly made the playoffs a year ago.

Fast forwarding to Monday night, all eyes were on JuJu Smith-Schuster, who is still trying to prove he is a capable top dog at receiver. Many pundits and those around the team expected Dionate Johnson to step up and be that consistent second option for Big Ben.

However, don’t sleep on third year receiver James Washington as a candidate to emerge as Ben’s second best option. Last season, he put the league on notice, catching 44 passes for over 700 yards and three touchdowns with the uncertainty at quarterback last season. Against the Giants on MNF, Washington hauled in just two catches, for 34 yards, but his lone touchdown capped an impressive drive right before halftime.

Although he only saw three targets, he made the most of them. Below are some observations drawn from watching every snap he took against the Giants.

The way Washington gets off the ball and can easily open his defenders hips helps him create separation. He is not an elite burner downfield, but is a physical receiver who understands leverage and positioning. On his touchdown reception, he makes the defender hesitate and stop in his tracks with his release, uses the natural rub from JuJu’s route effectively, and immediately flashes open to Ben. Now, once the ball is in his hands, Washington displays his play strength and grit, and finds his way into the endzone. Those are things you love to see out of your third year receiver who is hungry for YAC.

On Monday, he caught just two passes for 34 yards, but an impressive touchdown here.

Beats his man off the line, nice natural pick from JuJu, catches the ball and powers in the endzone. Capped off bug drive before half. pic.twitter.com/KO9VRewbEu

On that same drive, Washington shows off his football acumen and IQ as a receiver. On this go route converted to a back shoulder fade, he understands he won’t beat Bradberry over the top. Bradberry is in his hip pocket, ready to make a play on a deep pass.

However, it starts with the release once again. Watch below, as Washington opens Bradberry’s hips forcing him to turn and run with him. When Washington realizes Ben wants to throw his way, he throttles down and uses his body as shield against Bradberry and goes up, highpointing the pass. On this stop route, Washington uses Bradberry’s momentum against him, and picks up a huge 21 yard gain late in the second quarter.

On that same drive he scored, Washington and Big Ben connect for a nice back shoulder.

Washington does a nice job throttling down when he realizes he won't beat Bradberry over top, makes nice adjustment, high points the ball for a first down.

There wasn’t too much to criticize about Washington’s game in terms of downfield blocking and catching the football. There is, although, a moment where he could have picked up another big time catch early in the third quarter, when the Steelers were in the midst of closing out the Giants.

The Steelers offense dialed up a slot fade for Washington, essentially giving Ben a decent sized window to drop the ball in. Washington, lined up in the slot, beats his man off the line and doesn’t create much separation. He does a nice job slowing down, preparing for the arrival of the football, and goes up to meet the ball at its highest point.

The way he attacks the ball, however, is what allows Bradberry to deflect the ball away. Washington tries to catch it like it’s an over the shoulder pass instead of turning his body in the air and flipping his hands to catch it like a slant pass that is out in front. Because of that, Bradberry disrupts the catch process and causes Washington to drop the ball.

This play could have been another big gainer for the #Steelers WR James Washington. Operating out of the slot, he gives Ben enough room to drop it in,.

However, Washington does not high point it and use his body to shield off Bradberry, giving him a chance to break up the pass. pic.twitter.com/PVAfAsk5In

While this is a minor flaw in his game from Monday, it would have set the Steelers up with a nice opportunity near the redzone if he hauls it in.

All in all, James Washington put forth a solid effort in game one. With no preseason and reps to get the timing down with Big Ben, Washington and the receivers still went out and made some big plays when called upon. Expect Washington to see more than three targets against an injury riddled secondary in the Denver Broncos.