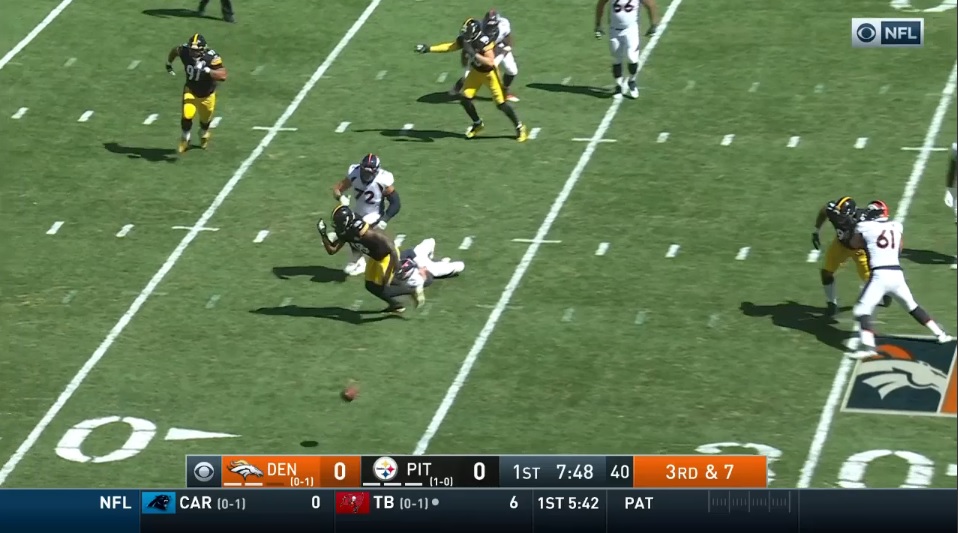 Rush and coverage goes together. That’s the old saying. We hear that from everyone. Players, coaches, analysts, you’ll hear Dave Bryan and me talk about it all the time on the podcast. The better your rush is, the better your coverage is and vice versa.

So what does it actually look like on Sunday’s? Bud Dupree’s sack/forced fumble of Drew Lock Sunday is a great example of rush covering for coverage. And there was some great technique by the front four to get to Lock so quickly.

Starting with a look of the play from above. Four man rush gets home in 2.5 seconds with TJ Watt generating the initial pressure off the right side. Dupree cleans it up with the sack/fumble. It’s a good thing the rush got home and got home quickly. Check the slot to the bottom. KJ Hamler beats Mike Hilton on this dig route, Hilton losing his footing as the twitchy Hamler stems inside. He’s wide open over the middle, easily going to convert on 3rd down and potentially find the end zone. But because Watt is in Lock’s face almost immediately, he has to focus on avoiding pressure, rolling out, and trying to keep the play alive.

So how did Watt win? Just a great dip and rip past RT Elijah Wilkinson. Great burst off the line, wins the edge to stress Wilkinson’s set, and gets skinny as he turns the corner. Simply no surface area to Wilkinson to punch at that’d steer Watt upfield and out of harms way.

Watch how low Watt gets while still being able to corner and turn to the QB. Incredible ankle flexion. That’s where that sub-7 three cone he ran at the Combine comes into play.

But Watt didn’t record the sack. Lock escaped and rolled right. It was Bud Dupree who finished the job and knocked the ball free. Dupree rushed free running a T/E stunt with Cam Heyward. Heyward was the crasher, hitting the B gap between left tackle and left guard. Once he crashes, Bud Dupree loops over the top and is free to the quarterback.

It’s a well-run stunt, one the Broncos don’t pass off well between LG and LT. But I love the details from Heyward as the crashed. As he’s hitting the B gap and LT Garrett Bolles is trying to mirror Dupree, Heyward picks/rubs Bolles to bump him off track. It isn’t a hard shot but it doesn’t need to be. Sneaky, veteran play.

Bolles has no chance to work back to Dupree and attempt to bump him as he loops. Dupree has a free shot to the quarterback. He closes quickly and finishes with violence, attacking the football and knocking it loose.

The irony here is Mike Hilton, the man who slipped in coverage, who should’ve given up the big play, ended up jumping on Dupree’s forced fumble. Had the pass rush not gotten home, this is a first down, a big play for Denver, a drive that likely ends in points. Instead, it’s a turnover. That’s what an elite front four gives you.