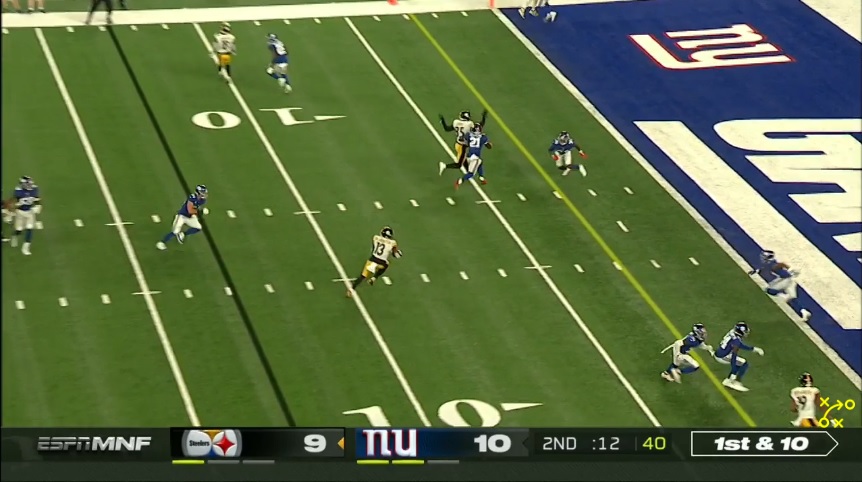 There was no bigger key to the Pittsburgh Steelers’ offense than Ben Roethlisberger’s return. But as Mike Tomlin and the Steelers preached all summer, simply adding Roethlisberger didn’t mean the rest of the offense got to sit on their laurels. A great offense has excellent talent and scheme. Pittsburgh showed both Sunday.

On two of Roethlisberger’s three touchdowns, the Steelers exploited the Giants’ man coverage, using picks and rubs to create separation near the goal line.

Let’s take a look at both plays.

Starting with the first touchdown to James Washington. Steelers line up in an empty set. Slant/wheel combination to the bottom between James Washington and JuJu Smith-Schuster. Washington takes a good angle to work under JuJu as he heads to the flat, forcing LCB James Bradberry to try and work over the top.

But he runs into rookie slot corner Darnay Holmes, the rub executed perfectly. This isn’t even risking an OPI with a Steelers player setting the pick. The two defenders are crashing into each other. Washington is now free underneath with Bradberry taken out of the play. Roethilsberger hits him and Washington does the rest, barreling into the end zone with his grew-up-on-a-farm strength.

Similar design on Smith-Schuster’s second touchdown. It’s the same concept, a slant/wheel route between both. This time, the RCB avoids getting picked but the slot corner has to pause to avoid the collision. It gives Smith-Schuster a couple steps vertical and an easy, game-sealing score.

The Giants aren’t doing a terrible job aligning themselves here. Pre-snap, both corners are doing a good job of playing at different levels to better avoid getting picked. But they still end up on the same level with the way Pittsburgh’s designed these routes. It’s also probably good scouting from Pittsburgh, either pre-game or in-game, seeing the Giants aren’t “banjoing” these routes – passing them off to the other corner – to avoid getting picked. New York tried a simpler, faster scheme with so many new and young faces in the secondary. Bradberry is in his first year with the team while Holmes is a rookie.

This isn’t Pittsburgh doing anything unheard of or innovative. Just quick, simple scheme that the Giants couldn’t stop and didn’t adjust to. And it led to two of Big Ben’s first two touchdowns in his return. For a red zone offense that was dead last in 2019, this was a refreshing change in so many ways.