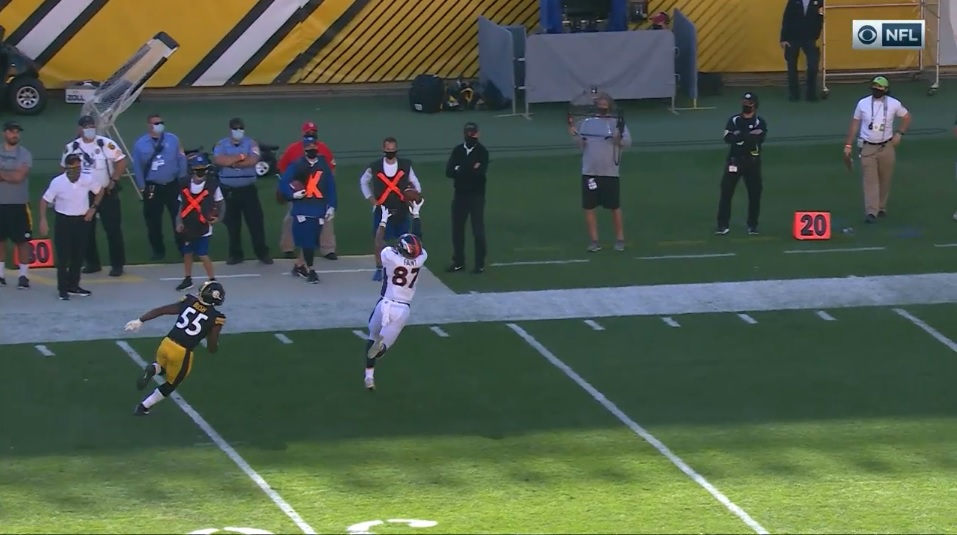 The Steelers pass defense was tested on Sunday vs Broncos as the backup quarterback, Jeff Driskel, threw for 256 yards and two touchdowns. The concerning part was him taking advantage of some coverage busts in the Steelers secondary. A few were centered around 2nd-year linebacker, Devin Bush. Heading into Year 2, it was expected that Devin Bush was going to be the Steelers every-down linebacker and he’s lived up to that so far as he’s literally played 100% of the defensive snaps through 2 games. It comes with the territory that you have to be able to cover to be an every-down linebacker in today’s NFL. Thanks to some struggles last season and the Broncos game last week, fans and analysts alike are starting to grumble about Bush’s coverage ability and if he can be trusted consistently in that area.

So how did Bush’s coverage stack up on the All-22 view of the game? Let’s dive into the tape and break it down.

Let’s start with the good from Sunday. A large majority of Bush’s coverage reps are him running out to the flat. With his sideline-to-sideline speed, he’s able to cover these with ease on a consistent basis. Here’s just one example against the Broncos where he stays patient and trusts his eyes on the play-action then finds the tight end after his block release and forces a throw away from Driskel. A relatively simple play, but one that you can see linebackers screw up on a weekly basis across the league.

This play Bush is manned up with Noah Fant, the tight end that gave the Pittsburgh fits in the 2nd half. You can see him get hands-on early and easily carry him down the seam.

This is the 3rd & 2 before the 4th down sack from Terrell Edmunds that eventually won the game for the Steelers. Bush is waiting for the first “in” receiver from the Broncos’ trip bunch formation and it turns out to be the speedy rookie, KJ Hamler. Bush again gets hands-on within 5 yards, carries Hamler on the drag, and rakes through his hands at the catch point for the pass breakup. It would have led to an interception if the ball hangs in the air a split second longer. An overlooked play on the day that leads to a 4th down.

Here the Steelers are in a form of cover 2 and Bush is given the responsibility of a deep seam drop. Bush reads this well and closes quickly on the drag throw to Jerry Jeudy. You really couldn’t ask Bush to play this any better and props to Jeudy for hanging on this one even as he paid a price for it. Bush was flagged for the play, but from the TV replays, it looked like a hard, clean hit with his shoulder. In today’s’ NFL that is exactly what you should be looking to do and more times than not that hit will dislodge the football. I’ll take that play every time.

This play is another highly-questionable penalty on Bush. He’s manned up with former-Steeler, Nick Vannett. Vannett runs a simple out route at 8 yards. It’s possible the ref thinks he sees Bush’s left arm wrapping Vannett’s waist but I’ve watched both All-22 angles 100 times and can’t definitively say there’s any type of pull or grab there. Just a ticky-tack call when Bush overall had great coverage.

We’ll start to switch gears here a little and there’s no better segue than a play that is still very much in question, the Noah Fant touchdown. If you haven’t yet, go check out my breakdown of this play and how we THINK it should have played out. However, since my breakdown was published Keith Butler has come out and said someone was supposed to blitz on the play and didn’t as well as Minkah Fitzpatrick saying that the defense put Bush in a tough position on the play, but adjusted after. I’ll post the play below, and stick with my initial reaction that I’m not sure how you can expect any player, much less a linebacker, to cover the corner from Bush’s initial alignment and he looks like he’s simply walling off a throw inside looking for help over the top.

Speaking of putting Devin Bush in a losing situation here is another one. Here he is matched up with KJ Hamler in the slot. Now if you’re not familiar with him at this point, he is a blazer out of Penn State. He didn’t run at the combine due to a hamstring injury, but it was rumored that he was running in the 4.27 range before injuring himself. A lot of guys end up running a slower time than what they tell reporters, but I have no qualms about calling Hamler a 4.3 guy. Regardless of Devin Bush’s speed, there’s no situation he should be matched up with Hamler 1-on-1 in this part of the field. You can see Hamler easily stair-step him and continue burning down the field on his over route. Thanks to the tight end being on a drag Steve Nelson provides Bush with some help over the top, although it’s a moot point with Haden giving up the deep ball to Cortland Sutton on the play.

The play following Fant’s touchdown, there’s no question this is on Bush. This is cover 1, which is man across the board except for Minkah Fitzpatrick patrolling the middle of the field. At the goal line, the first rule for a defender is not to get beat inside across their face. Bush makes this task difficult for himself by jumping out to be square with Fant at the snap. Then, he’s unable to get hands-on to hinder Fant crossing his face leaving it to be an easy pitch and catch for Driskel and Fant.

Here’s the 2nd corner route to Fant. This time it’s clear that Bush is man-to-man on him. I again have to question his alignment presnap, which I have to assume is more of a scheme problem than a Bush a problem. He actually carries the route well at first up until Fant distinguishes it as a corner. I’m not sure why, but Bush sinks under this almost like he thinks Fant is running an out instead and puts himself in no position to make a play on the ball. If Bush carries this like a corner he has a real chance to shut this down or at least unsure Fant doesn’t get 2 feet inbounds.

The questions surrounding Bush’s coverage skills are certainly understandable, but let’s remember that this kid is still 22 and nowhere near a finished product. You can see he’s also made plenty of plays in coverage that may go unnoticed. It takes time to learn NFL offenses and pick up on receiver/tight end tendencies. I don’t want to be seen as making excuses for Bush or excusing poor coverage in some situations, but I’m also not going to completely write a guy’s coverage ability off 2 weeks into his second season. The athleticism is there in order to make these plays and that’s more than half the battle. So let’s wait and see if he improves throughout this season and into the next when he has more experience under his belt.