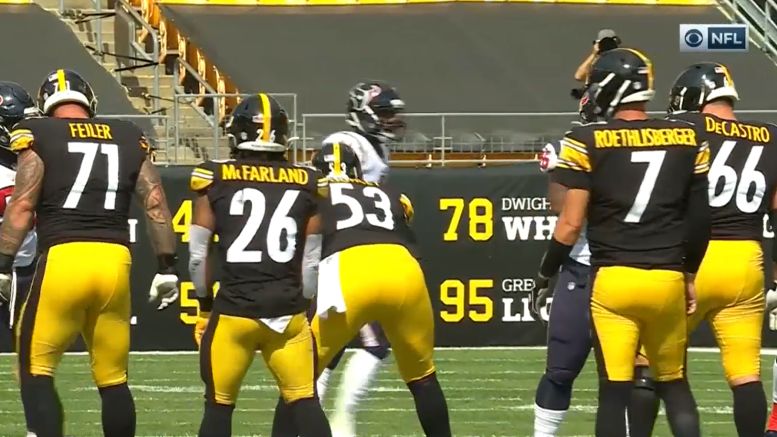 If it seems like every week we are writing an article about another Steelers rookie making an impressive NFL debut you’re not wrong. With Chase Claypool and Alex Highsmith having impressive games in the season opener, then Kevin Dotson more than holding his own in his first start against Denver, it was now Antony McFarland’s time to impress and impress he did. After getting a helmet in week 2 but not receiving a snap, it was clear the Steelers had a plan to get him involved against the Texans. He only played 10 snaps, but in the limited snaps he managed to have 7 touches, and it would have been 8 if he didn’t drop a pass. He finished with 42 rushing yards which included an explosive 20-yard run and 7 yards receiving on one catch.

With his performance, it wasn’t just fans that took notice as Mike Tomlin mentioned that McFarland has earned more snaps in his Tuesday press conference. Even an unlikely source in David DeCastro mentioned him in his press conference saying, “I like the way that he moves in space, his cutting ability, and he’s just very, very fluid. And he’s young, too, which is great at that position.” With all the praise for McFarland’s week 3 performance, it’s only right to dive into the tape and see what all the hype is about.

We’ll start with McFarland’s first career touch. As soon as he touches the ball you can clearly see he has a different type of speed and acceleration than any other back on the roster. It’s likely the Steelers haven’t had a legit running back (sorry Chris Rainey or Dri Archer) with this type of speed since the days of Rashard Mendenhall and Willie Parker. It makes McFarland extra exciting because his 4.4 speed makes him a homerun threat every time he touches the ball.

Here he follows a great kick out block by Derek Watt on his brother JJ before cutting upfield and getting 7 yards. It’s literally his first carry in the NFL but would have loved to see him sell an inside out move before crossing the 50 and testing his speed against Texans safety Justin Reid. He also is carrying the ball in his inside arm which makes it harder by not giving himself the option for a stiff arm. With the great blocking from James Washington at the bottom of the screen, it could have been a race to the end zone.

Truly not much to dissect here other than speed, speed, speed from McFarland. The left side of the line opens up a nice hole for the rookie RB and you can again see he has an extra gear pulling away from the linebacker for his longest run of the day (20 yards). Also nice to see him show a little power, finishing the run against the safety.

The Steelers dressed up a buck sweep with Matt Canada’s “yo-yo” motions with Claypool. You can see it creates a bit of a rub on the Texans linebacker that helps him get caught up in the wash. With the pullers, Maurkice Pouncey and Matt Feiler, leading the way McFarland again gets to utilize his speed to the outside. While it’s a good run you’d still like to see McFarland utilize his blocks here better. If he’s able to gear down for a split second, letting Pouncey pick up his block downfield, he’s probably able to pick up an extra 10 yards. One thing I did like to see was now that McFarland had the ball in his outside arm he was able to lay an effective stiff-arm at the end of the play.

It became very clear the Steelers’ plan in this game was to get McFarland’s speed outside in space. This time an outside zone play is called but McFarland sees the Texans DT that slipped off a cut block slanting down into the hole and cuts back. He then slips back under Vance McDonald’s block for a modest 2 yard gain. This is another situation where I’m fine with McFarland taking what’s there, but at the same time, I wouldn’t mind him trusting his speed and bending this the whole way back hitting all that grass on the right side of the field.

Many Steelers fans may have not been able to believe their eyes as this is one of those rare successful RB screens for Pittsburgh. It’s yet another designed play to give McFarland a chance outside in space. He may have gotten a little overzealous on this play and got too far outside before catching the screen as you can see his lineman are in no spot to be lead blocking for him. If he catches it at the landmark he’s supposed to be at, it’s likely he’s able to split Pouncey and DeCastro’s blocks and get the first down up the hash. Instead, he has to cut back due to the now unblocked linebacker and gets pulled down short of the sticks. That’s something I’m sure that got addressed in the RB meeting rooms this week, but these are the types of things you expect to see from a rookie in his first start.

Following the screen to McFarland, it brought up a 3 &1 for the Steelers. This is the first and only play on the day that was truly designed for him to run inside. Can’t knock McFarland on this one as you can see from the endzone view Chukwuma Okorafor whiffs on his block, letting the linebacker blow up the play. Regardless of the outcome, I don’t think McFarland will be making a living being the Steelers’ short-yardage back. You’d much rather see James Conner or Benny Snell getting the carry here. It was one of the more curious personnel decisions on the day. The other glaring miss was the shotgun run with Jaylen Samuels on the first drive of the game, which made the Steelers settle for a field goal.

Other than those two questionable decisions, I thought the running back rotation was really solid against the Texans. With a healthy dose of the bruisers like Snell and Conner then you sprinkle in the speed with McFarland. I’m really excited to see how these guys are deployed in future games.

The Steelers motioned McFarland out wide twice on Sunday. This time they actually threw to him on the slant. The throw is a bit behind him but it’s a catch you’d like to see him make. When running backs motion out wide, they’re usually manned up by linebackers. If McFarland can prove himself as a reliable receiver, his speed could turn into a real matchup nightmare for defenses.

While there’s clear room for improvement, Anthony McFarland proved he can be a weapon for this offense. I don’t plan on him being the bell cow for this offense anytime soon, but using him as a change of pace for a roughly 5-10 touches a game, as they did against the Texans, is a great role for him right now. As previously mentioned, the Steelers really haven’t had a running back with his skill set for close to a decade. When a defense is getting hit in the mouth with Conner and Snell play after play having McFarland come in and run right past them is the perfect combination.