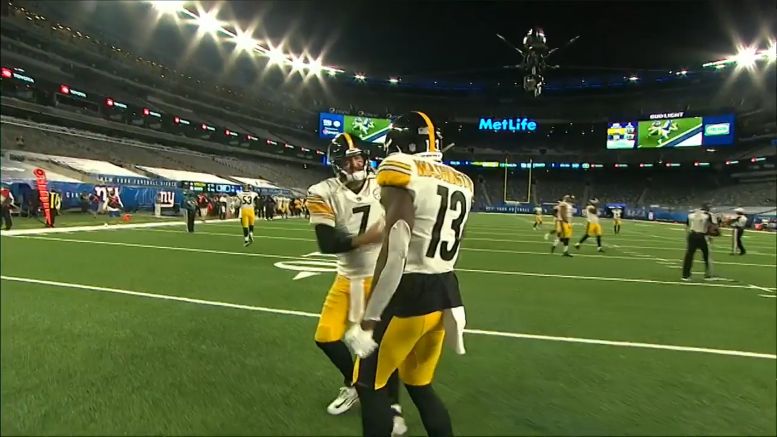 The Pittsburgh Steelers’ favorite new pastime is drafting wide receivers in the second round, having essentially done so in four consecutive years (Diontae Johnson was selected 66th-overall, a pick they viewed as their second-round selection after trading it to the Broncos to move up for Devin Bush).

But it’s not just the pedigree of the wide receivers they have drafted—it’s the fact that they’re all so young. Between Johnson, JuJu Smith-Schuster, James Washington, and Chase Claypool, they’re all 24 years old or younger.

And their quarterback is 38 years old. You can almost add two of them together and not reach Roethlisberger’s age—well, not quite, but it’s getting to that point. So how do you build those connections between what is essentially two different generations? According to offensive coordinator Randy Fichtner, the wide receivers are doing a good job of “keeping him young”.

“That communication has been awesome to see. I don’t know how you couldn’t feel rejuvenated about things like that”, he said on Thursday, via transcript. “You watch a play like these guys were out there making and JuJu jumping in a pile and fighting 11 guys for a ball and things like that. There’s enough to be excited about that group and then Ben has just jumped into it with them”.

“That’s exciting, because they are a young group”, he continued. “We are all always developing. Coach Hilliard has done a fabulous job with those guys in the short period of time that he is able to be here. Like I said, a lot of that is just to improve Ben’s communication and interaction with them as well”.

I’m not sure how ‘lit’ Roethlisberger might be these days, but he is in the best shape that he has been in some time, and on Monday he showed that he can still throw the ball around. He didn’t attempt many deep balls (going 1-for-4 on passes of 20 or more air yards, but also completing two of more than 15 yards in the air), but there didn’t look like there was a throw he couldn’t make.

It’s all the more impressive considering the fact that he is coming off of surgery, and that this was his first live action in almost a year because of that. But Roethlisberger also is far from new to the natural turnover of the roster and suddenly finding himself ‘the old guy’. It’s been happening for getting on a decade now.

I don’t particularly care how ‘young’ the receivers are keeping Roethlisberger as long as he continues to play the same way, but it’s important to build relationships. They’re keeping him familiar with the latest TikToks and whatever else the youngins are doing these days, but on Sundays, it’s all about pitch and catch, about the oldest ‘sport’ in the world.