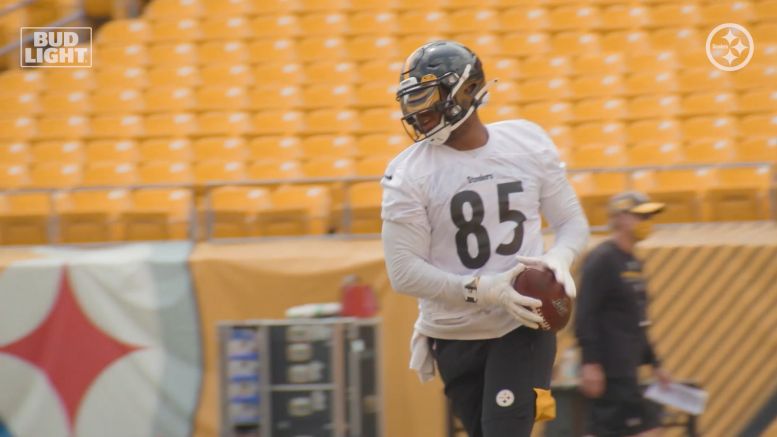 The Pittsburgh Steelers have a pretty good defense. Actually, you could say they have a very good defense, if you go by last season and the groundwork they have laid for what is to come in 2020. And their offense has certainly seen what their opponents are in for. Offensive players, when interviewed, haven’t been shy in acknowledging that the defense has typically gotten the better of them during scrimmage sessions this training camp.

But the offense has fought back over the course of training camp and made it competitive. One of the players who has given defenders the most fits is tight end Eric Ebron, signed as an unrestricted free agent back in March. But it’s not easy work.

“Just today, we start shifting over and getting ready for our future opponents, and I’ve never been more happy than I’ve been today in any other training camp”, Ebron told Jim Miller and Pat Kirwan on SiriusXM Radio on Thursday. “We literally go up against one of the top defenses every day, and it’s fun, but at the same time it’s so exhausting”.

“It’s like, you might see one of the top defenses once every other week or whatever”, he said about working in the regular season. “We see them every single day. So it’s going to be fun to be able to go up against someone else other than T.J. Watt and Bud Dupree every day”.

To his credit, Ebron has been ‘fun but exhausting’ for them to go up against for the defenders as well. I recall in a previous interview, he was asked about one drill in which Dupree was working in coverage. Ebron beat him, and Dupree took his frustrations out on the pylon.

As long as he’s healthy, and he says that he is after having a ligament in his ankle surgically repaired, the veteran tight end is simply going to be a problem for defenses around the league, and Ben Roethlisberger is going to have a lot of fun throwing to him.

Opposing offenses, however, will have their hands full with this defensive unit. A guy like Ebron may win during one-on-one and practice settings, but the Steelers will have a guy like him game-planned for. I would imagine that someone like Devin Bush will work up against the athletic tight ends the Steelers may face this year.

But as they say, iron sharpens iron. In a closed environment of good on good, you sometimes worry if the successes of one group are really the failures of the other, but in the end, the process itself only makes both better in the long run.