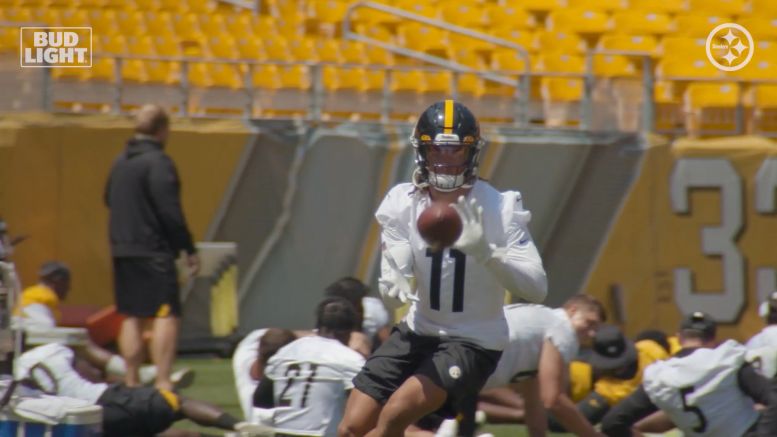 Terrell Edmunds was supposed to sit.

Diontae Johnson was supposed to sit.

There’s a saying about best laid plans worth mentioning here.

The expectation, the hope, the goal for the Steelers’ rookie class is to see as little action as possible. Enter the lineup at their own rate, when there’s full trust, confidence in what they can do. It’s a great spot to be in considering everything that’s happened the last six months. No rookie minicamp. No spring workouts. No preseason games. Rookies are way behind the eight ball, there’s no arguing that. Pittsburgh’s in a much better spot, not counting on those rookies out of the gate, than some of teams around them. Cincinnati is taking their leap of faith with #1 pick Joe Burrow whereas Cleveland is counting on LT Jedrick Wills – a RT at Alabama – to protect Baker Mayfield.

The Steelers aren’t in that boat. They didn’t have a first round pick, traded away last year for Minkah Fitzpatrick, while second and third round selections Chase Claypool and Alex Highsmith are viewed as depth pieces out of the gate.

But how quickly things can change.

In 2018, Terrell Edmunds was supposed to be a sub-package piece behind veteran Morgan Burnett. The goal to limit his snaps and workload of a young, raw rookie who left school a year early. That plan was quickly abandoned. Burnett got hurt in camp, Edmunds wound up starting Week 1, and logged 1190 total snaps his rookie season. That was a top five snap count in all of football, rookie or not.

Diontae Johnson was supposed to sit and learn Year One, another underclassmen playing behind a vet like Donte Moncrief. At the time, the thought was Johnson could integrate himself into the offense by mid-season but otherwise have a quiet rookie year. That changed by Week 2. Moncrief struggled through a broken finger, dropped every pass thrown his way, and was eventually shown the door. Johnson became the starter and to his credit, responded well, leading all rookies in receptions.

So yes. On paper, Claypool as the #4 receiver, a situational, red-zone asset looks good. And that’s the plan to begin the season. But all it’ll take is one injury, one poor performance, one something to vault Claypool into seeing starter snaps. Ditto with Highsmith. If Bud Dupree or TJ Watt aren’t available for whatever reason, Highsmith’s snap count will quintuple. The good news is both guys have earned glowing camp reports though that is *just* camp. Much different when the games start counting.

Similar could happen with the lesser known rookies. Should the Steelers’ RB room fall apart like it did last year, Anthony McFarland will log plenty more time. This should be a redshirt year for Kevin Dotson but injuries along the interior, David DeCastro’s apparently missing Week One, could open the door. Even Carlos Davis has simply made the roster and has a better chance for action than I thought he would.

Anything can and probably will happen this year. Especially in the scope of the pandemic, where players can test positive hours before a game and send them to a bench, forcing the team to rely on Plan B. Somehow, someway, at least one of these rookies we expect to be eased into action will be thrown into the fire instead. Let’s hope they’re ready.