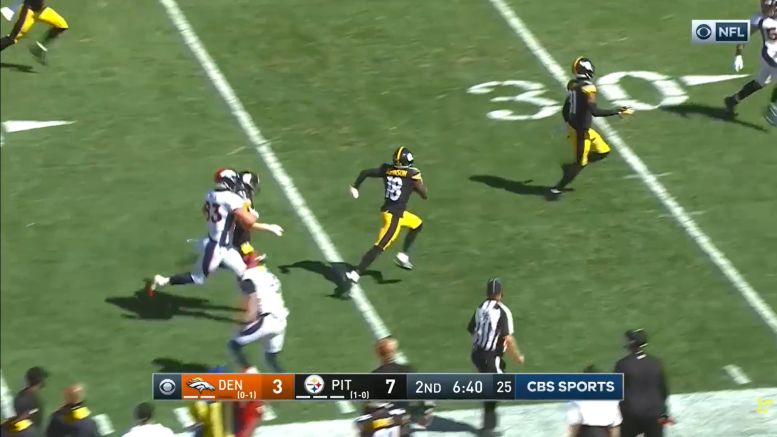 For the second time in as many weeks, Diontae Johnson fumbled for the Pittsburgh Steelers early in the game, only this time it didn’t prove as costly. On Monday against the New York Giants, he muffed the opening punt inside the five-yard line, the Giants recovering and ultimately converting it into a field goal.

This time, he successfully fielded the opening punt, again inside the five, proceeded to run into Cameron Sutton, but still bounced off of him and returned it out to the 23. But then he fumbled on an end-around attempt on first down and lost eight yards.

In other words, the details and ball security continue to be issues for Johnson 18 games into his professional career, having put the ball on the ground twice already in just two games. Between offense and special teams, he did that five times a year ago as a rookie. Plain and simply, this must be an area that he cleans up.

Unsurprisingly, the Steelers went three and out after that loss of eight. James Conner got back the lost yardage on second down, but Ben Roethlisberger threw short of the sticks to JuJu Smith-Schuster on third down, and they settled for a punt on fourth and two.

Fortunately, even though the Denver Broncos were driving down the field following the punt, the defense was able to stiffen up as they crossed midfield. After forcing a third and seven, T.J. Watt got initial pressure on Drew Lock before Bud Dupree finished him off for a sack and strip, Mike Hilton recovering.

Of course, Johnson does too many things well to focus only on the occasional mistakes that come up. There’s a reason that Ben Roethlisberger has quickly picked up on him as one of his favorite targets, including a game-high 10 in the opener, and 13 yesterday.

About 20 minutes into the game, for example, Johnson had multiple short receptions on the same drive in which he made great effort to gain yards after the catch, including converting a first-and-16 into a first down across midfield.

And then there was the punt return touchdown that was brought back due to a holding call, Sutton flagged for the penalty. It should have been Johnson’s second punt return touchdown in as many seasons, this one going for 81 yards, but instead it resulted in the Steelers starting their drive from the 17—and then Roethlisberger hit Chase Claypool for an 83-yard touchdown.

And then he was able to finish the game with his first touchdown of the season, Roethlisberger finding him for a big score in the fourth quarter just as the Broncos were climbing their way back into the game, a 28-yarder on his seventh reception of the game, on 10 targets, for 80 yards.

In between, there was a dropped pass on third down, albeit a ball put behind him, to remind us of his imperfections. He finished the game with eight catches for 92 yards and a touchdown, returned two punts for 25 yards (and had one that should’ve gone house), but these little things will continue to creep up, and can be costly.