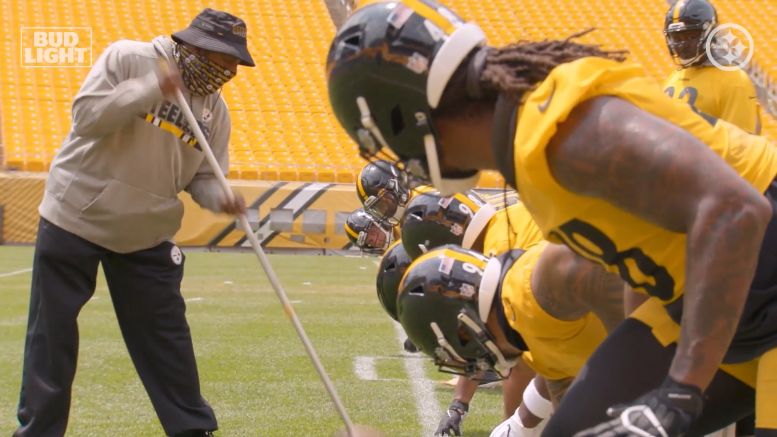 The New York Giants choosing to draft Daniel Jones out of Duke at quarterback last year was one of the more eyebrow-raising moments of the first round of the 2019 NFL Draft. As a rookie, he ended up starting 12 of 13 games, going 3-9, completing 284 of 459 passes for 3027 yards with 24 touchdown passes to 12 interceptions.

Outside of the low yards per attempt figure of 6.6, which isn’t even significantly low, those aren’t unreasonable numbers for a young and inexperienced quarterback. His absurd 18 fumbles, however, was another matter, and he’s about to face a team that led the league in forced fumbles and fumble recoveries. T.J. Watt forced eight fumbles by himself, Bud Dupree adding another four.

While that will be a concern in terms of protection, however, Jones knows that the first step is simply preparing for the defense that he is about to face, and he knows that the Pittsburgh Steelers present a formidable front, not just with the edge rushers but also with All-Pro Cameron Heyward, and Stephon Tuitt coming off of injury.

“You look at their defense, it starts up front with those guys”, he told reporters last week. “Watt and all those guys up front can make plays. As an offense, as a quarterback, we have to make sure we’re executing, that I’m understanding where to go with the ball, getting the ball out on time, and making sure we’re sharp from that perspective. They’re good players. They cause you to study what you’re doing, make sure you’re prepared going in and I think we will be”.

Hopefully having a player like Minkah Fitzpatrick on the back end in particular will make him think. The beauty is that nobody has actually yet seen what he will look like now that he is fully integrated into the defense. He was learning everything on the fly and as he went along last season. Now the defense is built around him, as one of the focal points of the entire unit.

But of course it’s not just the front four, or Fitzpatrick. It’s the whole secondary growing together, having a full season as a unit. It’s about Devin Bush having a year under his belt and prepared to hit the ground running this time. It’s about the sheer level of speed that they have on all three levels of the unit, a combination of both physical talent and diagnostic ability.

The Steelers are very much capable of making Jones and many other quarterbacks look foolish. They did have more sacks and turnovers than anybody else in the league, after all. But reputation has never won anybody any games. It’s about going out there every week and proving that that reputation that preceded you was well-earned.