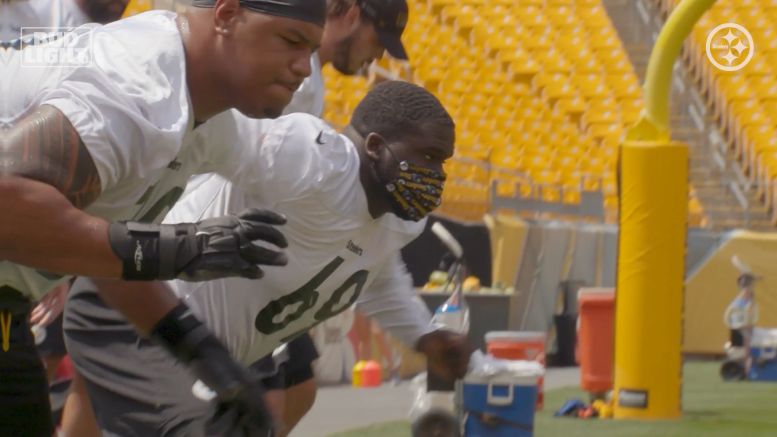 The Pittsburgh Steelers had somewhat of a minimalist draft class this year. Just five picks in total. No pick in the first round. Only one selection in the top 100. Even with that being said, they are getting pretty encouraging reviews from some of their new faces, in particular Chase Claypool and Alex Highsmith, their two highest picks.

It’s starting to look more and more likely that perhaps their final two picks, safety Antoine Brooks and defensive lineman Carlos Davis, are more likely to wind up on the practice squad, but their two fourth-round picks have drawn some positive press as well when healthy, which has been an issue this camp.

That includes lineman Kevin Dotson, who worked his way back from a scary knee injury a week ago. Now with camp wound down and the Steelers shifting their focus to game preparation, he is going to have lost out on some valuable fundamental work, but Kevin Colbert said they are encouraged with what he has shown.

“It’s a little bit of a late arrival because unfortunately, Kevin dinged his knee up a little bit before we got the pads on and had to work his way through it”, he told Pat Kirwan and Jim Miller on SiriusXM Radio on Thursday. “Really, he just got back to full time work last week, with the pads on. And it was encouraging to see him in the short amount of time that we’ve seen him, get some extra work. David DeCastro sidelined for a little period as well. So Kevin’s going to get some extra work, and did at the end of last week, and now into this week”.

“We’re not in a real true camp setting from this point forward. We’re prepping for the Giants, so he doesn’t get that extensive work that he would have gotten earlier in camp, but so far so good”, he added. “It’s just a continuing learning process. He just has to catch up, and so far when he’s had the opportunity with the pads on, he’s shown us some things that give you some hope. Whether he’ll be ready to contribute right away, only time will tell”.

The expectation is that he will serve as the Steelers’ eighth lineman this season, a role that previously would not dress for games, but with 2020 rule changes, teams are now allowed to dress that eighth lineman without it counting against their gameday actives.

While he may get a helmet, however, that doesn’t necessarily mean he will play. As a small-school rookie who had no OTAs, no minicamp, no preseason, and even missed a chunk of training camp, there is a lot of developmental work that he was left out of this offseason.

It’s great to look good in a practice setting in one-on-one reps and hold your own and show off your physical strength. It’s another to deal with complex blitzes and stunts and things of that nature. That’s what a lineman has to be prepared for before he steps out on the field. Unless they want to use him as a gigantic fullback.