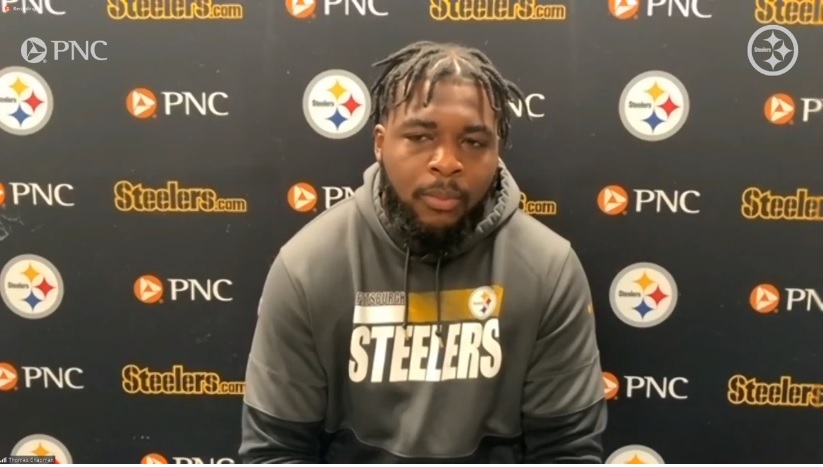 Chukwuma Okorafor knows the Denver Broncos well. Two of his three starts have come against the Broncos, including his first in 2018. On paper, Sunday’s matchup was the easier of the two. Okorafor has experience on his side, now in his third year as opposed to being a rookie, and didn’t have to deal with the dangerous Von Miller, lost before the season began with an ankle injury. He played well, Ben Roethlisberger sacked only one and that wasn’t Okorafor’s fault.

Speaking to reporters Monday, Okorafor evaluated his performance. He said like Kevin Dotson, he thought he did better in pass protection than as a run blocker.

“I would say probably the same thing.” he said via Steelers.com. “I think my pass was a little bit better than the run. For me, just being a little lower and [working on] my hands.”

Okorafor’s name wasn’t called much during the broadcast. That’s often a good thing for an offensive linemen. Better to go unnoticed than give up sacks and mental mistakes that get your quarterback hit. The entire Steelers’ o-line calmed down after a rough Week One. Against the Giants, Roethlisberger was hit five times and sacked twice. Both those numbers fell Sunday. Four hits, one sack, and overall, Roethlisberger was under far less duress.

Okorafor was filling in for RT Zach Banner, likely lost for the season after tearing his ACL late in the Steelers’ Week 1 win over the New York Giants. The two battled for the RT spot during training camp, which Banner narrowly won, but has defaulted to Okorafor because of the injury. Despite the competition those two had, Okorafor’s made sure to reach out to Banner since his injury.

“I actually sent him a text I think on Friday just kind of reaching him to wish him best of luck in terms of the surgery and stuff. As bad as it is, it’s kind of part of their game. There’s always someone who who might get hurt, which obviously that’s not the best case. You always have to kind of adjust every day, just come in and work.”

Unless he struggles mightily, Okorafor will be the team’s right tackle the rest of the season. He’ll get a tougher matchup this Sunday when Pittsburgh hosts Houston and JJ Watt. Through two games, Watt has recorded six tackles, five QB hits, two sacks, and one pass deflection.