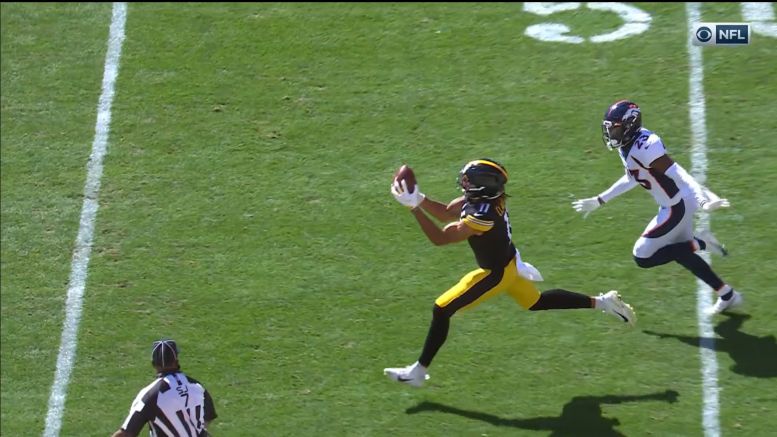 I started out this article thinking that I was going to be writing about Chase Claypool’s notable special teams contributions. He recorded a tackle on the opening kickoff, contributed to another a bit later, and forced a fair catch, all within about the first 20 minutes or so of the game.

Then he got involved in the offense. In a big way. And in a hurry. Just after an 81-yard Diontae Johnson punt return touchdown was called back due to a holding penalty, Ben Roethlisberger hit Claypool deep down the left sideline for what instead went for an 84-yard, one-play touchdown drive, which put the Steelers up by two possessions before halftime. It was the longest touchdown by a Canadian-born player in NFL history.

The team used a second-round pick to bring in the 6’4” Canadian whom they call Mapletron, but given the nature of the offseason and the fact that there were at least three wide receivers ahead of him on the depth chart, there were questions about how early and how often he would be used.

Well, they’ve been finding ways to get him involved during the first two weeks of the season, which should serve as a pretty good indication of their intentions going forward. In the opener, he had three touches, with Roethlisberger hitting him on a 28-yarder down the right sideline for his first touch, which was deemed the most unlikely catch of the week based on advanced metrics.

He followed that up with another reception, and then they trusted him with the ball in his hands to ice the game, giving him an end-around on fourth and one, which he easily picked up after dodging a defender in the backfield, showing smarts to get down inbounds.

Like last week, his first touch wouldn’t be his last, either, though he would have to wait until the second half. On the fourth target of his career, just after the Broncos scored to make it a three-point game, he helped the Steelers start moving, getting eight yards on second and seven, scooping up a low throw. Roethlisberger came right back to him on the next play for a bubble screen, but unfortunately the defense was there to cut him down behind the line of scrimmage before he even had a chance to advance.

So far in his NFL career, Claypool has been targeted three times, coming up with three catches, including two explosive plays, for 127 yards, plus a touchdown. He also has one carry for eight yards, which could have gone for more if he hadn’t intentionally given himself up.

As the season wears on, no doubt he will be worked more and more into the offense, especially, I would suspect, in the red zone, which is something the team has actively discussed. But for now, he’s already delivering, and making a legitimate impact.