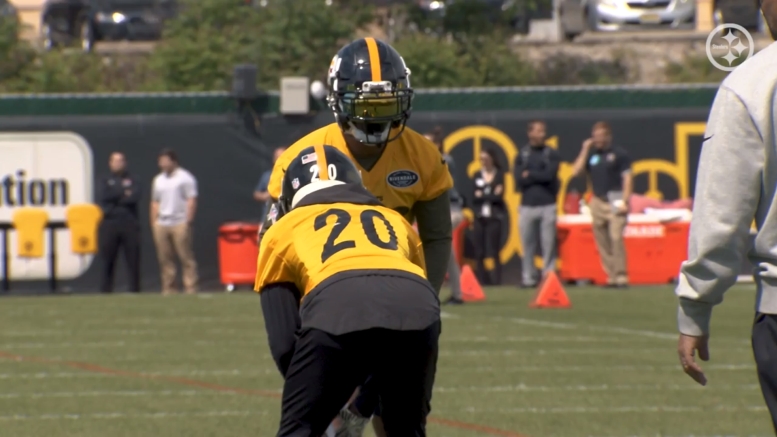 One of the most important yet perhaps least-publicized and least-well-understood parts of football and of growing as a player is about how that happens internally, in a locker room. Obviously teams hire coaches to teach their players what they want to know, but so much of the learning happens from player to player, which is why it’s so important to have a good mix of veterans and youth to keep that chain linked.

Of course, you also have to have the sort of culture in the locker room, which is largely driven by the veterans, that facilitates that natural communal sharing of knowledge. The Pittsburgh Steelers often have had that and have it now. The offensive line, for example, meets together on their own to review film. The secondary does as well, led by Joe Haden in recent years.

Going into his fourth season, Cameron Sutton has been a part of that, and he gives a lot of credit to his development over the past three years to that player-to-player transference of knowledge. That’s probably especially valuable for a player like him who could be asked to play all over the field.

“I had a great group of secondary guys, let alone secondary coaches, and just guys around the defense who have been able to transfer a lot of knowledge to me”, he told reporters, “whether it’s playing outside or inside or dime or nickel. And obviously from the safety aspect, the great safeties that we have now, and since we’ve had since I’ve been here”.

“I’ve learned a lot from the guys that have been around”, he continued. “That’s humbled me, and like I said, being able to create opportunities for myself and kind of paved my own way. And I think that’s the biggest thing for me. Guys are all brothers and play together. We’re not selfish, because we all know it’s for a bigger cause”.

As he enters the 2020 season, he has perhaps for the first time in his professional career something that can be considered a defined role. He figures to be the team’s dime defender this year, something that defensive coordinator Keith Butler said. He also said that Sutton would be playing quite a bit.

Not only will he be the dime defender, in a package that they intend to use more than they did last season, but he will also be the first man off the bench at either outside position or in the slot. It’s not even entirely impossible that he won’t be called upon to play at safety in the event of an injury as well.

Sutton played 265 defensive snaps last season, the most of his career, totaling 15 tackles with two for loss, a sack, five passes defensed, and a game-sealing interception in Week Six out west against the Los Angeles Chargers and Philip Rivers.