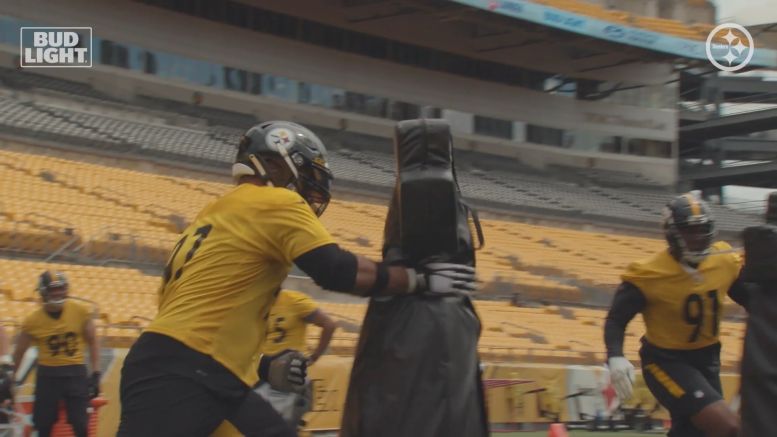 While the Pittsburgh Steelers just recently finalized their (initial) 53-man roster, which has already undergone three revisions, the biggest news surrounding the team right now is with an eye toward the future, as just a week before the regular season was set to begin, they were able to wrap up veteran defensive lineman Cameron Heyward with a new four-year contract extension.

Totaling more than $65 million in new money, it was reported as being the largest contract ever signed by a defensive player over the age of 30, earning himself comfortably over $16 million per season in new money, and puts him toward the top of the payscale at his position to boot.

In spite of the fact that he is now 31 years old, however, he doesn’t seem very concerned about the notion of playing into his mid-30s and whether or not he would still be able to perform at that point. For him, in fact, age is just a number.

While speaking to reporters yesterday and being asked about his relationship with Aaron Smith and Brett Keisel, the two starting defensive ends who were well-established and well-respected when he was drafted in 2011, he implied that his progress was delayed by being behind those two.

“Brett always told me, you’re gonna keep getting better, you haven’t hit your prime, and I really took that to heart”, he told reporters. “I felt like there’s another gear for me to hit. I’m entering my 30s, but I was behind those guys for so long, I gotta play catchup. I kind of feel like I’m still in my late 20s”.

He didn’t say it in frustration in any way. Rather, it was to point out that he feels those first couple of years left off some wear and tear that he otherwise might have gone through. But he’s had a history of defying his age and experience. Heading into the 2017 season after missing most of the 2016 season, he said he was viewing that year as his sixth, rather than his seventh, that 2016 was essentially a mulligan.

In actual fact, of course, Heyward is entering his tenth season in the NFL and he will be 31 years of age when he plays it. But his best ball of his career has come from the age of 28 and on, and after the significant injuries of the 2016 season.

This is why both he and the team were confident in the chances of Heyward being able to play at a high level at least deep into his current contract. Every team who signs a player over 30, outside of the quarterback or specialist positions, does so with the understanding that any long-term deal may include some dead weight at the back end, depending on how things progress.

But Keisel played until he was 36, and he was still performing well at that age, even if he wasn’t nominally a ‘starter’ for the majority of his final season, despite playing more snaps. Smith also played until he was 35, even though his last few seasons were riddled with injuries. Here’s to hoping he’s able to show similar longevity, and with even greater success, securing his legacy as the greatest 3-4 lineman in team history.